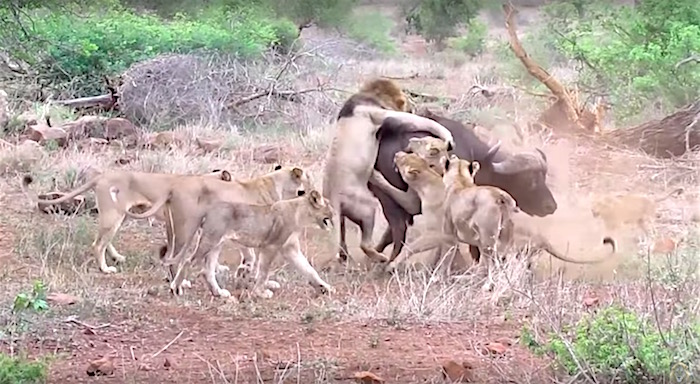 Dog scolds lions for laying in its field 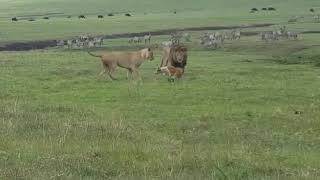 Rex worked hard for this field. He was still making payments. To find lions laying there, rent-free, in his paddock? That simply would not do. A dressing down was in order. Read the rest 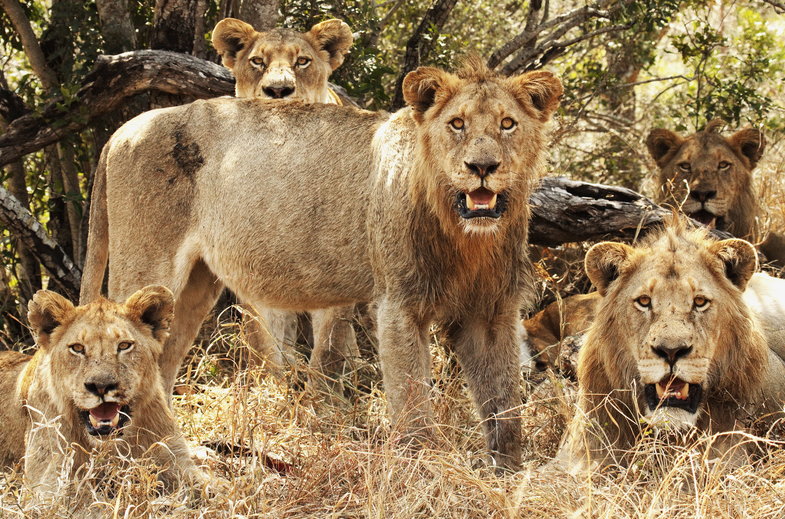 "It seems the victim was poaching in the game park when he was attacked and killed by lions," Limpopo police spokesman Moatshe Ngoepe said. "They ate his body, nearly all of it, and just left his head and some remains."

Police found a hunting rifle and ammo near the body.

In 1889 an African lion escaped into the sewers of Birmingham, England 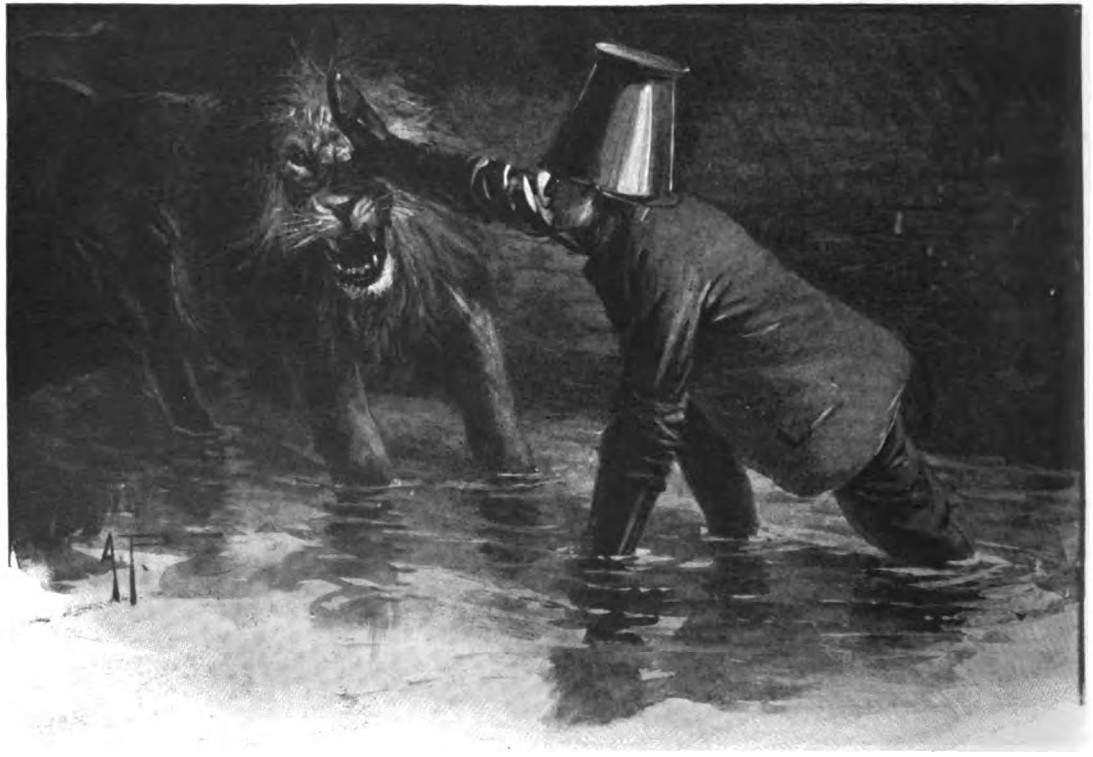 Birmingham, England, faced a surprising crisis in 1889: A lion escaped a traveling menagerie and took up residence in the city's sewers, terrifying the local population. In this week's episode of the Futility Closet podcast we'll descend into the tunnels with Frank Bostock, the 21-year-old manager who set out to capture the desperate beast.

We'll also revisit a cosmic mystery and puzzle over an incomprehensible language. 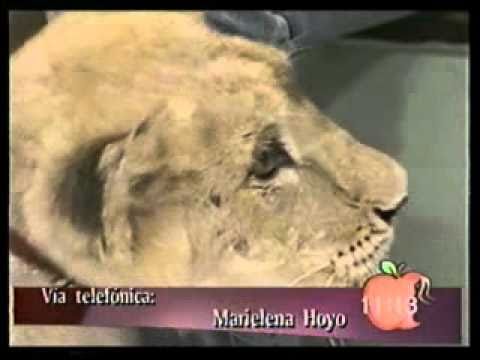 When the baby gets older, she'll learn to politely smile like the grownups around her while something terrifying is happening. Read the rest

Why are scientists drawing eyes on cows' asses? 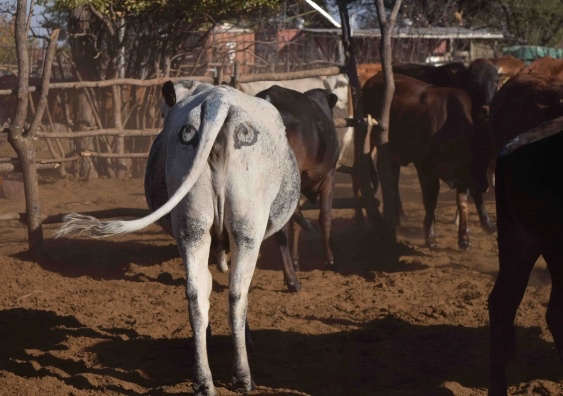 In Botswana, conservation scientists from the University of New South Wales are painting eyes on the rear ends of cattle in an effort to deter lions from eating them. As the lions' protected habitats shrink, they move closer to human settlements. In Botswana, the lions attack the livestock that the subsistence farmers count on. That leads the farmers to kill the African lions, further endangering the species.

(UNSW conservation biologist Neil Jordan’s idea of painting eyes onto cattle rumps came about after two lionesses were killed near the village in Botswana where he was based. While watching a lion hunt an impala, he noticed something interesting: “Lions are ambush hunters, so they creep up on their prey, get close and jump on them unseen. But in this case, the impala noticed the lion. And when the lion realised it had been spotted, it gave up on the hunt,” he says.

In nature, being ‘seen’ can deter predation. For example, patterns resembling eyes on butterfly wings are known to deter birds. In India, woodcutters in the forest have long worn masks on the back of their heads to ward-off man-eating tigers.

Jordan’s idea was to “hijack this mechanism” of psychological trickery. Last year, he collaborated with the BPCT and a local farmer to trial the innovative strategy, which he’s dubbed “iCow”.

US dentist blamed for killing beloved lion in Zimbabwe 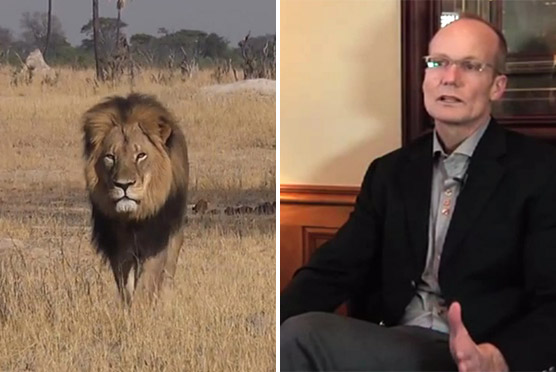 Palmer is said to have paid $50,000 for the privilege of killing the big cat with a bow and arrow.

Video: What's it like to go face-to-face with a lioness?

[Video Link] National Geographic wildlife photographer Mattias Klum tells a funny story about the day a lioness got a little too close.

He was lying on the ground near her in an effort to get a good shot.

"I like the perspective, it's like, in her realm," Klum recalls, "I'm not in a platform, or in a jeep, I'm there with her. And it felt really good. Until she started walking towards me."

Filmed at a recent National Geographic event. You can buy Klum's photos here, and follow him on Twitter here.

(thanks, Marilyn Terrell) Read the rest

A tiger at Ankara zoo managed to find a gap between its cage and that of a lion, which it attacked and killed. From the BBC: "The tiger severed the lion's jugular vein in a single stroke with its paw, leaving the animal dying in a pool of blood, officials said." Read the rest