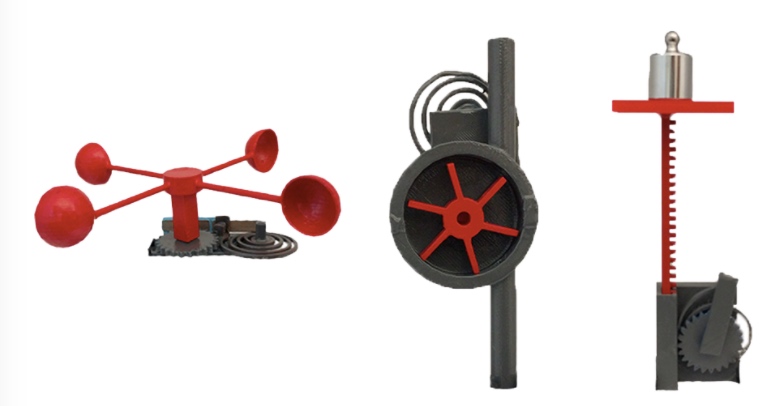 University of Washington researchers 3D printed mechanical sensors and switches from standard plastic filament that can send data to Wi-Fi devices without using any electronics. As the engineers explain in this video, the plastic devices either reflect or absorb the ambient Wi-Fi signals and that effect is translated into a signal of zero or one. From the Printed Wi-Fi research page:

Specifically, we introduce the first computational designs that 1) send data to commercial RF receivers including Wi-Fi, enabling 3D printed wireless sensors and input widgets, and 2) embed data within objects using magnetic fields and decode the data using magnetometers on commodity smartphones. To demonstrate the potential of our techniques, we design the first fully 3D printed wireless sensors including a weight scale, flow sensor and anemometer that can transmit sensor data. Furthermore, we 3D print eyeglass frames, armbands as well as artistic models with embedded magnetic data. Finally, we present various 3D printed application prototypes including buttons, smart sliders and physical knobs that wirelessly control music volume and lights as well as smart bottles that can sense liquid flow and send data to nearby RF devices, without batteries or electronics. 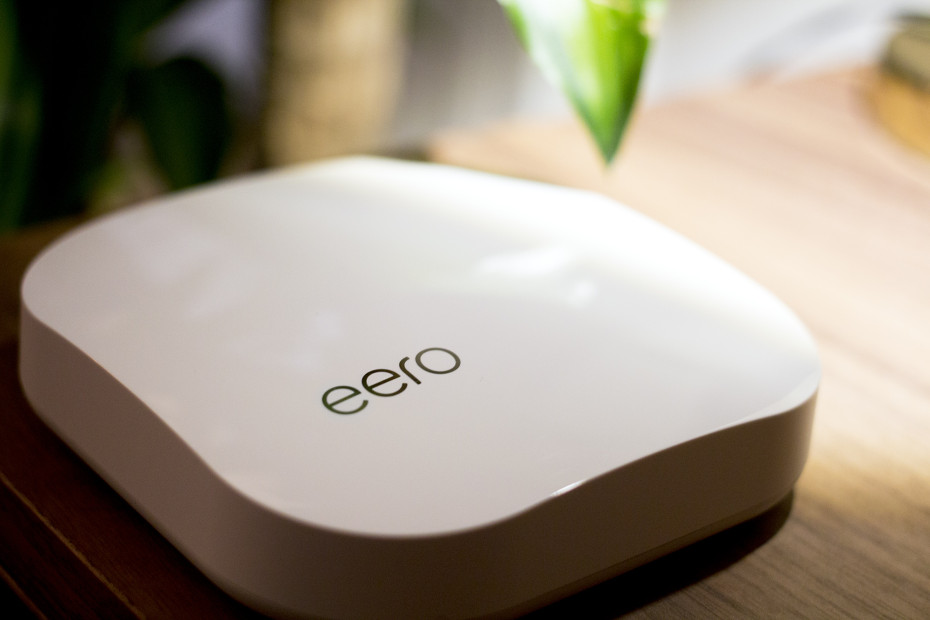 My home was built in 1927, and its Spanish plaster walls have deflected every attempt I’ve made at setting up a dead-zone free Wi-Fi network.   I’ve tried range extenders, moving large items around and I’ve even had my service provider attempt to tweak my setup.  When I first saw the eero Wi-Fi System, I was enticed by their promise of a quick setup and no dead-zones.

Wi-Fi waves are just radio waves, and the farther you get from the access point, the weaker they become. There’s no way for one router to get a signal through the walls, furniture and household appliances to every part of your home which is why I need a multi device setup.

I contacted eero inc. and spoke directly with CEO, Nick Weaver and what he said was obvious and true:

“We keep adding more connected devices to our networks and streaming more content — WiFi is now a core utility for our homes and yet we still don’t have fast, reliable WiFi in every room.”

Nick told me about his passion for building something that will change the world and I was sold. I’ve been using the system for about 2 weeks and I can tell you that the setup was simple and I can now manage the network from my phone.  As I added more eeros to my network, they automatically connected with each other to create a mesh network.

My home is about 1400 square feet upstairs and 1200 downstairs and though my package has 3 eero devices, I really would have been fine with 2. Read the rest

American Airlines is suing Gogo over its crappy Wi-Fi 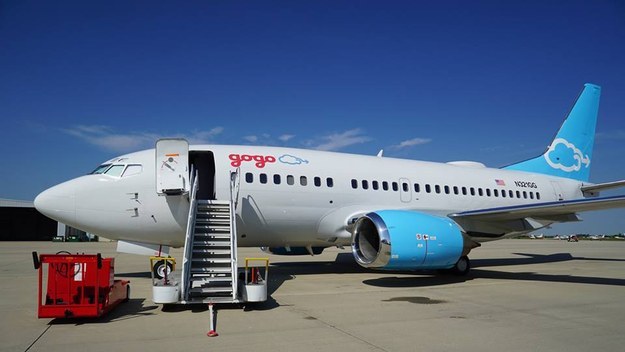 The first time I used Gogo's expensive inflight Wi-Fi, it was horrible. Web pages wouldn't load, email wouldn't send or receive. I decided to give them another chance a couple of months later and it was equally horrible. Gogo controls 80% of the in-flight Wi-Fi market, and they have a lot of nerve charging people for something that doesn't work. They owe me $25.

"[Gogo has] no comment on the merits of this litigation, but we would like to note that American is a valued customer of ours and that we look forward to resolving the disagreement regarding contract interpretation that led to this declaratory judgment action.”

If you'd like another reason to dislike Gogo, Buzzfeed has one for you:

Separately, Gogo has been criticized for unwittingly drawing some customers into monthly subscriptions that can’t be canceled from its website. A proposed settlement has been reached in a class-action lawsuit over such subscriptions, which may result in some users receiving Gogo day passes.

Gogo's stock price fell over 30% on Tuesday. Read the rest 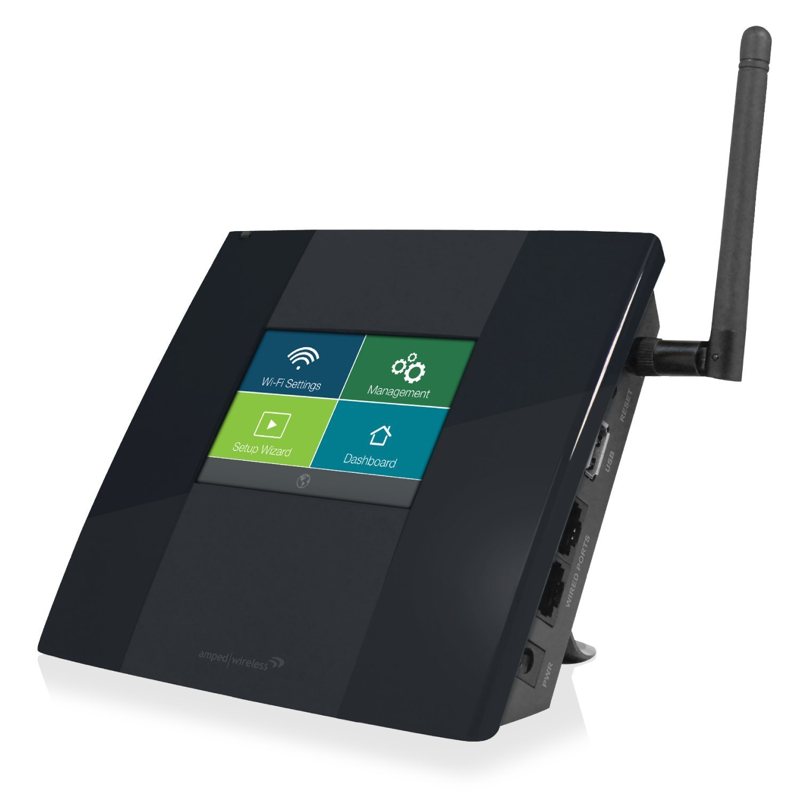 You don't need to use a computer to set up this Wi-Fi range extender. Just follow the instructions on the touchscreen. It also comes with a USB file sharing port. It's $(removed) on Amazon. Read the rest

My cable modem and WiFi router are on one end of our long house. The signal peters out before it gets to my daughters’ bedrooms, and because they like to do their homework in their rooms, I needed to come up with a way to extend the range. The Amped Wireless SR20000G Range Extender did the trick. I placed it in our dining room and it greatly extended the wireless signal. Setup was trivial and hassle-free. The speed of the data transfer did not noticeably diminish (i.e., my kids don’t complain when they watch Netflix on an iPad). I recommend this quick solution for spreading Wi-Fi around your house. -- Mark Frauenfelder

Sunset of a Blog

Should we pity a once-popular blog when its time in the sun has come and gone? Not so much. I'm watching the sunset of a moderately high-traffic site I've run for a decade, and that seems the natural course of events. Like the hecatomb of evolution, many blogs rose and then were slaughtered in the crucible of viewer attention (and blogger interest). Those that survive are fitter—or at least live in areas with abundant page views.

A recent glance at my statistics put me in a funk, briefly, until I dashed through Kübler-Ross's five stages of grief, adapted for the fast-paced online age. Denial: The stats must be broken! Anger: This is an awesome site; everyone must be blind! Bargaining: Maybe if I do a redesign? Depression: All that effort, for naught. Acceptance: Hey, what's going on at Reddit? Read the rest