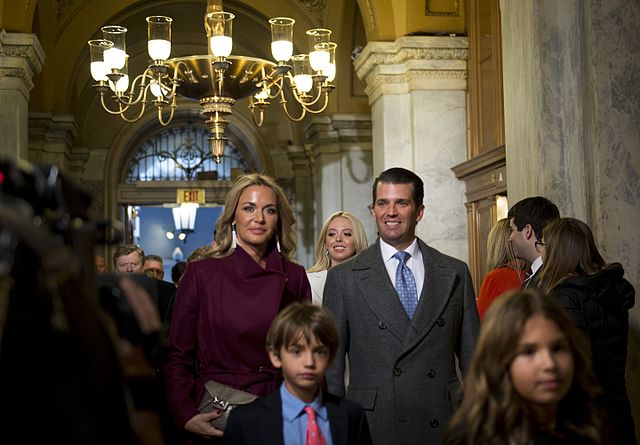 Vanessa Trump once told The New York Times that Donald Trump introduced her to Donald Trump Jr. (one of Trump's dumb and dumber boys) during a fashion show in 2003. They chatted during a break at the show. Five minutes later Trump introduced his son to her again, as if the first time had never happened. When she ran into Junior six weeks later, she said they talked for an hour before she realized who he was, and then blurted out, Hey, "you're the one with the retarded dad!"

Yep, she had that one right, and the apple obviously didn't fall far.

But Vanessa didn't connect the dots, and married Junior in 2005. After 13 years and five children, however, she finally got the picture and filed for divorce.

Just Wednesday, the New York Post reported that the Trumps, who have five young children, were on the rocks. Vanessa, 40, has now filed for divorce, per New York court records. But signs of the couple’s separation had long been speculated about — Don Jr., 39, a prolific user of social media, had lately been posting pictures of family life in which his wife was notably absent.

Fueling speculation about a rift, Vanessa had also been a no-show to her father-in-law’s State of the Union address, an occasion that drew Trump Jr.’s younger brother Eric, and his wife, Lara, as well as their half sister, Tiffany Trump. In a video posted to Instagram stories, the siblings and their spouses — sans Vanessa — gathered at the Kalorama home of Ivanka Trump and Jared Kushner before heading to the Capitol to listen to their father’s speech.