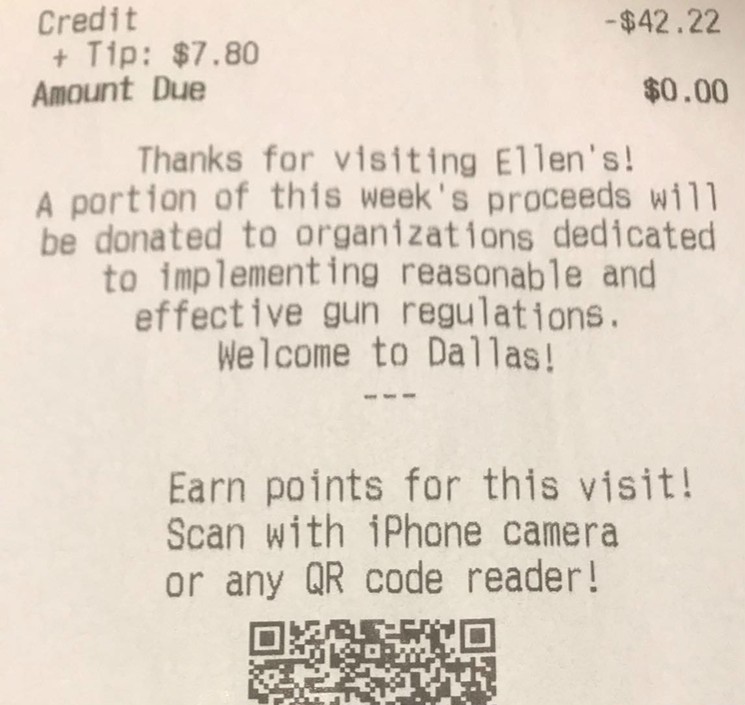 After listening to tons of racist and ignorant horseshit from NRA conference attendees, the owner of Dallas-area eatery Ellen's decided to donate a portion of this weeks proceeds to groups pursuing reasonable gun legislation. The NRA asked its members to eat elsewhere.

Everyone wins except the people dead of gun violence.

Ellen’s, a restaurant in downtown Dallas where the NRA is holding its annual convention, had a message printed on its customer receipts: “Thanks for visiting Ellen’s! A portion of this week’s proceeds will be donated to organizations dedicated to implementing reasonable and effective gun regulation.”

Most Americans consider that a sensible message — especially following the mass shootings at Columbine, Sandy Hook, Aurora, Parkland and the daily murders all around the country. But it angered the NRA.

The group tweeted an image of an Ellen’s receipt. “Attn @AnnualMeetings attendees. Steer clear of Ellen’s in downtown Dallas! Why go there when there are so many other great choices.”

Joe Groves, the owner of Ellen’s, said he added the message because of what he heard from NRA convention attendees. “I’m making a list of the vile, racist, moronic conversations overheard from NRA attendees eating at the restaurant,” he wrote on Facebook. “They don’t even speak softly.”

He told the website Eater that the attendees have insulted his wait staff with racial epithets. One person reportedly asked a Latino staff member, “Your illegals are kept in the kitchen, right?”

Another NRA fan reportedly told black employees they “don’t sound black” and asked if they were from India.