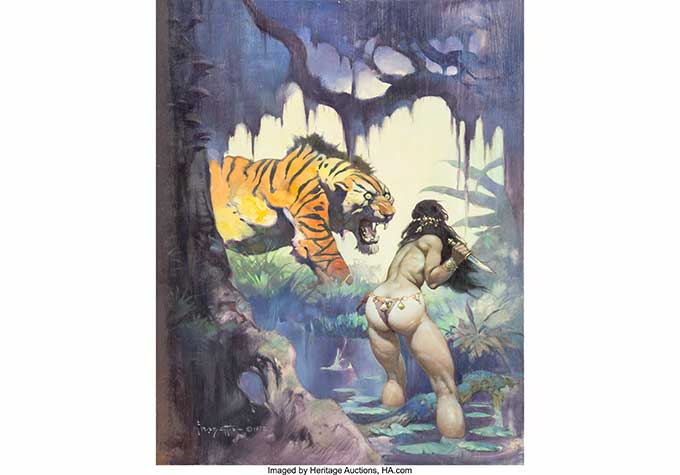 Heritage Auctions announced the sale of Frank Frazetta’s Escape on Venus for $660,000.

Used as the cover image for the 1974 re-issue of the Edgar Rice Burroughs novel of the same name, Escape on Venus was created in 1972 and released as a print later in the decade.

"Frazetta was very proud of the work. Ever innovating, he worked to differentiate every piece in a unique way. While always conscious of his audience, he incessantly challenged himself. During this period, he expanded his palette with vivid hues, and boasted that he could make those colors work in a believable, sensuous way. No one can argue that he did not achieve his goal!

Frazetta has a legion of fans, and a major reason is that he crossed over into several categories, each with its own exuberant fan base. They can be distinguished as the 4Bs -- Babes, Burroughs, Barbarians, and Beasts. When a Frazetta image contains more than one element, the demand rises exponentially. This painting certainly covers three of the four.

Frank often liked to discuss (or hear) what made his images so popular, not just after the fact, but also at the time of publication. It is well known how his covers would immediately stimulate the sale of a publication.

Testament: A Celebration of the Life and Art of Frank Frazetta 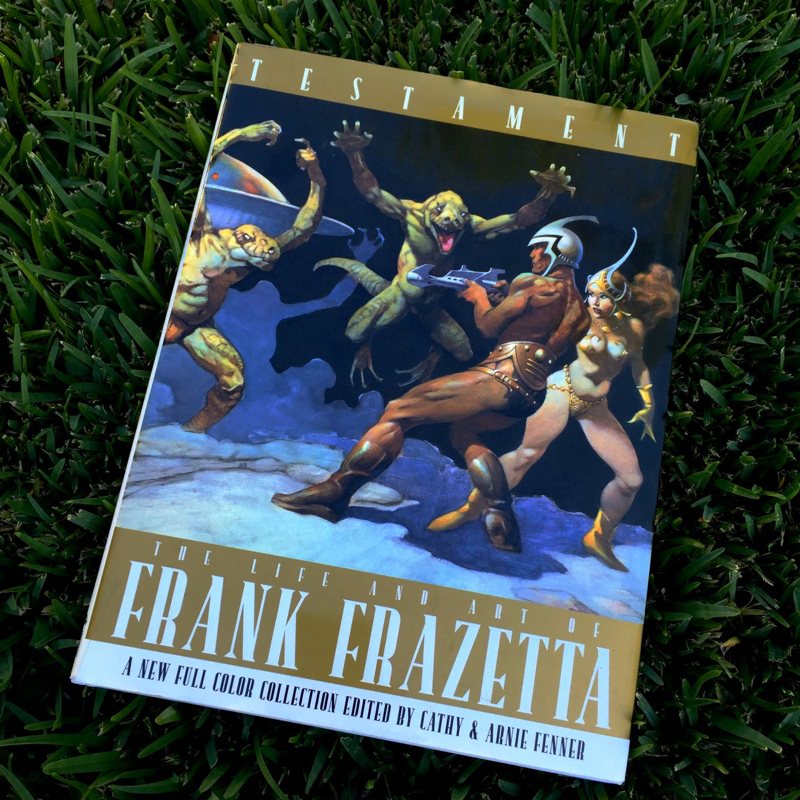 Many people first encountered the work of the painter Frank Frazetta (1928 - 2010) from his 1960s and 1970s paperback covers for Edgar Rice Burroughs' adventure novels and Robert E. Howard’s Conan stories. Frazetta also painted a lot of covers for fantasy novels that were nearly unreadable. But people bought the books anyway because Frazetta’s art was on the covers.

Frazetta is one of the best fantasy illustrators ever. When you think of sword and sorcery – its look and feel – you are thinking of the exotic universe Frazetta created on oil and canvas. He was inspired and influenced by the great book illustrators of the past, such as Howard Pyle, and N.C. Wyeth, but he added his unique style, and a love for fantastic worlds, strange creatures, demonic sorcerers, fighting men, and curvaceous women. The men and women in his paintings usually wear little or no clothing, because Frazetta loved the human body more than anything else, and he was a master at painting it.

Testament is a deep-dive tribute to Frazetta, with lots of rare examples of his early work in comic books, as well as paintings from his later career. It is the third book in a series edited by the Fenners (the first is Icon, and the second is Legacy, and they are both excellent).

I’ve been a fanatic Frazetta devotee since I was 12 years old and his work has never lost its magic appeal for me. Read the rest

40 Frazetta book covers at once

I've owned almost all of these Frazetta books, at one time or another. My favorites are probably the hardback editions of Edgar Rice Burroughs' Mars series that the Science Fiction Book club published in the mid-1970s.

(via Wonderful, Beautiful, and Strange Finds) Read the rest

In each episode of Gweek, I invite a guest or two to join me in a discussion about recommended media, apps, and gadgets. This time my guests were Peter Bebergal,the author of Too Much to Dream: A Psychedelic American Boyhood, and Dean Putney, Boing Boing’s software developer and author of Walter Koessler 1914-1918: The personal photo journal of a German officer in World War I.

This episode of Gweek is brought to you by 99designs, the world’s largest online marketplace for graphic design. Visit 99designs.com/gweek and get a $(removed) Power Pack of services for free.

Feeling more nostalgic than usual with the recent death of my dad, so have been looking at some cool stuff from the 70s that my father turned me onto at the time, such as Aurora monster models, and the Warren Publishing archives on archive.org.