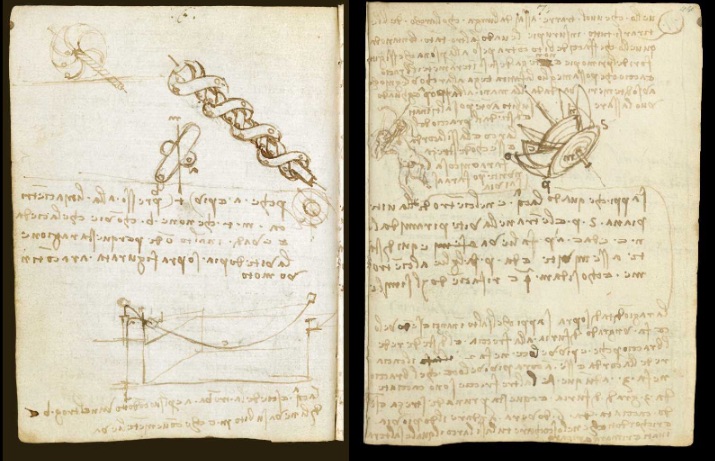 London's Victoria and Albert Museum has digitized and posted two of Leonardo da Vinci's personal notebooks. From The Art Newspaper:

“The notebooks remind us that Leonardo was as much an engineer as he was an artist. When he wrote in the early 1480s to Ludovico Sforza, then ruler of Milan, to offer him his services, he advertised himself as a military engineer, only briefly mentioning his artistic skills at the end of the list,” (says Catherine Yvard, Special Collections curator at the V&A’s National Art Library.)

Codex Forster I dates from the time Leonardo spent at the Milanese court and focuses on hydraulic engineering, featuring drawings of instruments for digging canals and for moving and raising water. It also includes a treatise on geometry and measuring solids.

Was the Mona Lisa meant to be 3D?

Was the Mona Lisa one of the earliest 3D artworks? Scientists studying the painting and a slightly different version possibly painted by Da Vinci or his students think the intent might have been to create a stereoscopic pair. From Discovery News:

(The University of Bamberg researchers) found that the horizontal difference between the two paintings was about 2.7 inches (69 millimeters), which is close to the average distance between a person's two eyes. (When a person observes an object, each eye sees a slightly different perspective of the object, both of which are sent to the brain and transformed into the three-dimensional representation of the object that we "see.")