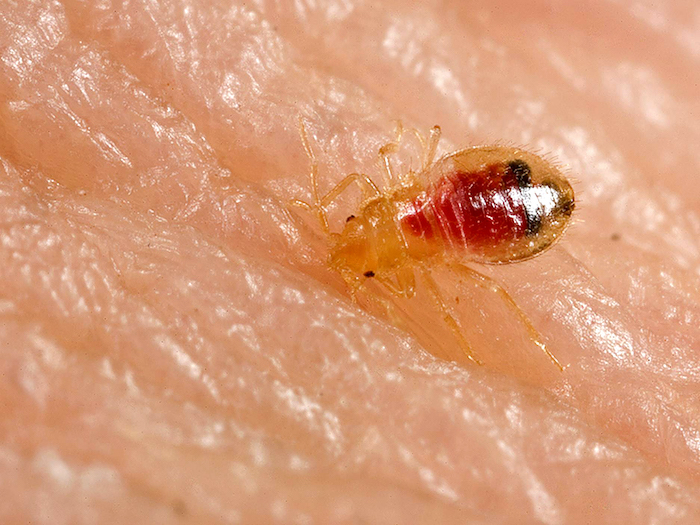 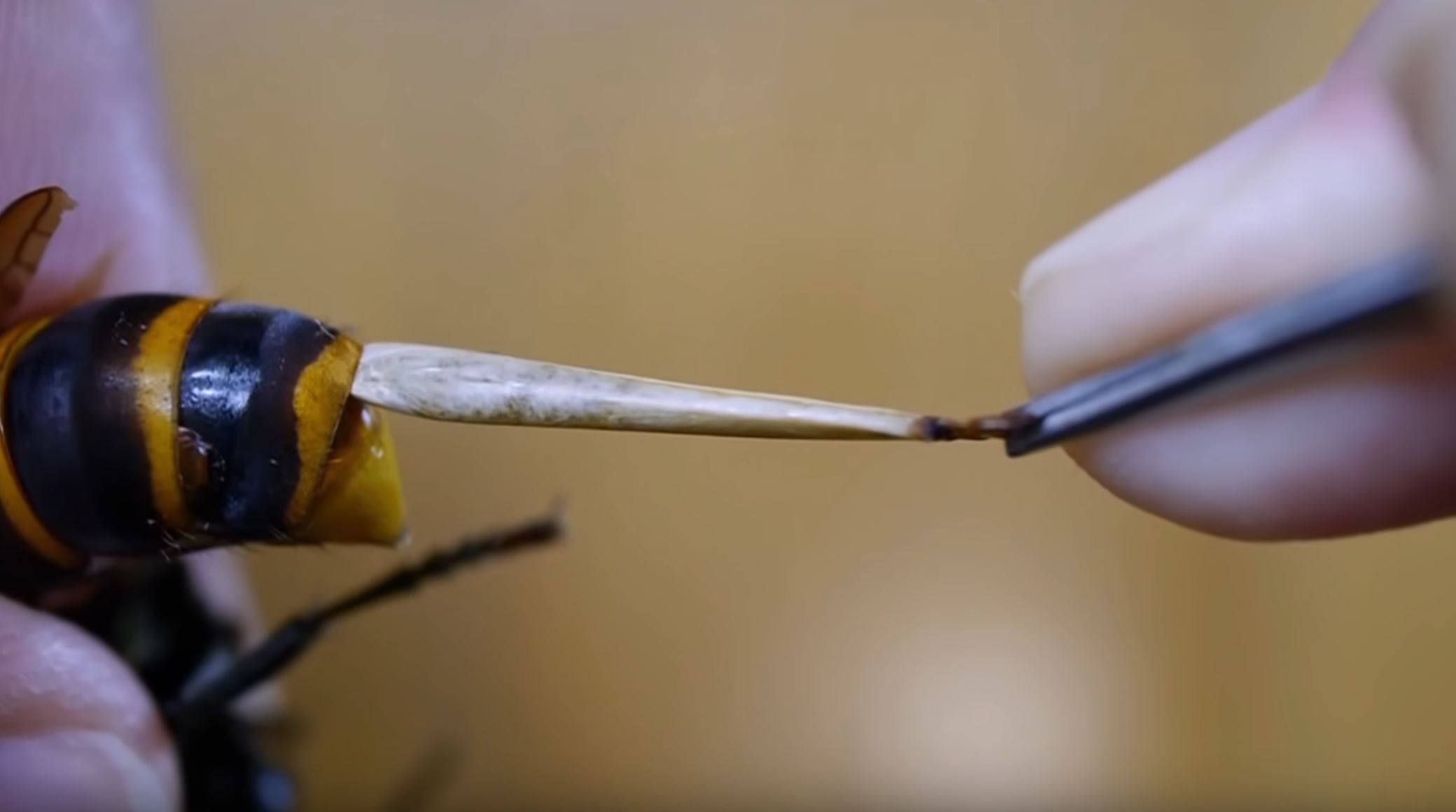 In this video, Xenos moutoni are carefully extracted from hornets. Xenos parasites, in the order Strepsipsera, live their entire lives in the abdomens of wasps and similar insects, altering the host's behavior. Here's a story about Xenos vesparum, which parasitizes paper wasps. And here's a scientific paper about Xenos myrapetrus, which lives within swarm-founding wasps.

Tiny tweezers and a steady hand. Read the rest 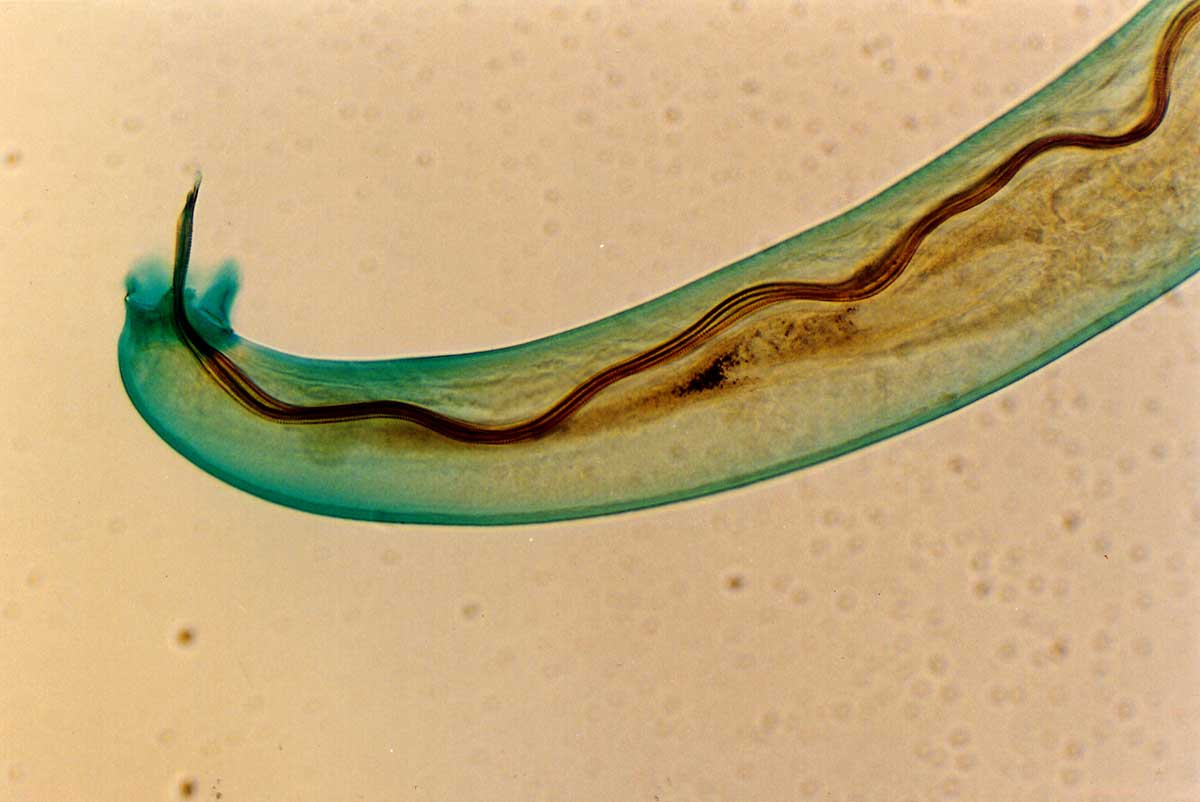 Friends, don't eat slugs and snails you find on trails in Hawaii. And while you're at it, make sure to wash lettuce leaves thoroughly to get rid of slug and snail excretions. Failure to heed these warnings could result in rat lungworms that dig into your brain and cause "neurological problems, severe pain and long-term disability."

The Centers for Disease Control and Prevention confirmed three new cases in unrelated adults visiting Hawaii Island from the US mainland, the health department announced. The latest known victims—who became infected at different times—bring the state’s 2018 case total to 10 and the 2019 total to five. While there were 17 confirmed cases in 2017, the state counted only two cases total in the prior decade. The new case counts indicate a sustained boom in the parasite’s population and spread.

The parasitic worm in these cases is the rat lungworm, aka Angiostrongylus cantonensis. As its common name suggests, the wandering worm primarily takes up residence in rats’ lungs, where female worms lay their eggs. Young worms leave the nest early to find their own windy homes, though. Larvae get coughed up into rats’ throats then swallowed. The hosting rat eventually poops out the young parasites, which then get gobbled up by feces-feasting snails and slugs (intermediate hosts). When other rodents come along and eat those infected mollusks, the prepubescent parasites migrate to the rats’ brains to mature before settling into the lungs and reproducing. The cycle then starts again.

The lousy lives of lice

If you have young children, it's highly likely that at some point you will be sharing your home with lice. Best to know your enemy. From KQED:

Head lice can move only by crawling on hair. They glue their eggs to individual strands, nice and close to the scalp, where the heat helps them hatch. They feed on blood several times a day. And even though head lice can spread by laying their eggs in sports helmets and baseball caps, the main way they get around is by simply crawling from one head to another using scythe-shaped claws.

These claws, which are big relative to a louse’s body, work in unison with a small and spiky thumblike part called a spine. With the claw and spine at the end of each of its six legs, a louse grasps a hair strand to hold on tightly, or quickly crawl from hair to hair like a speedy acrobat. 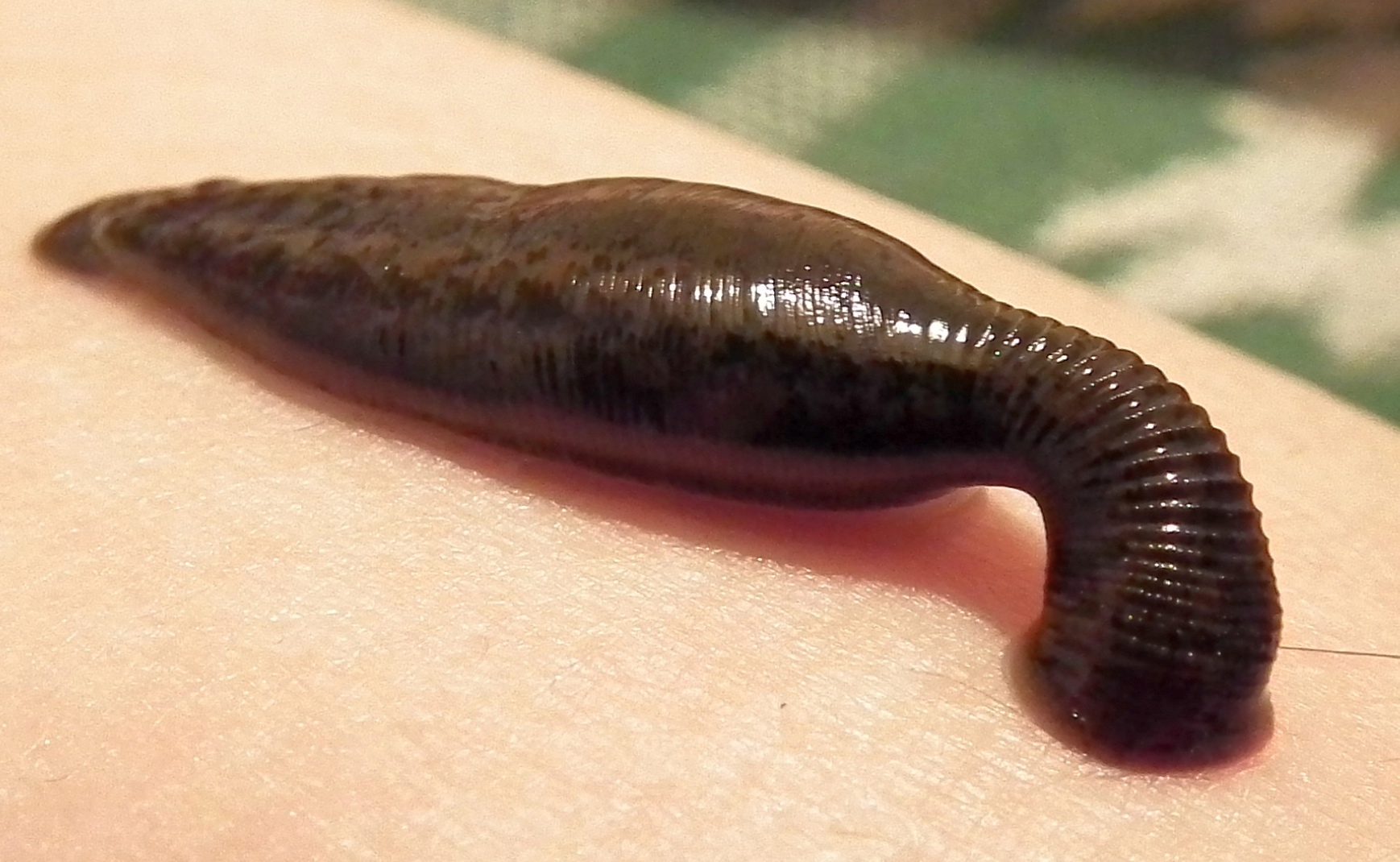 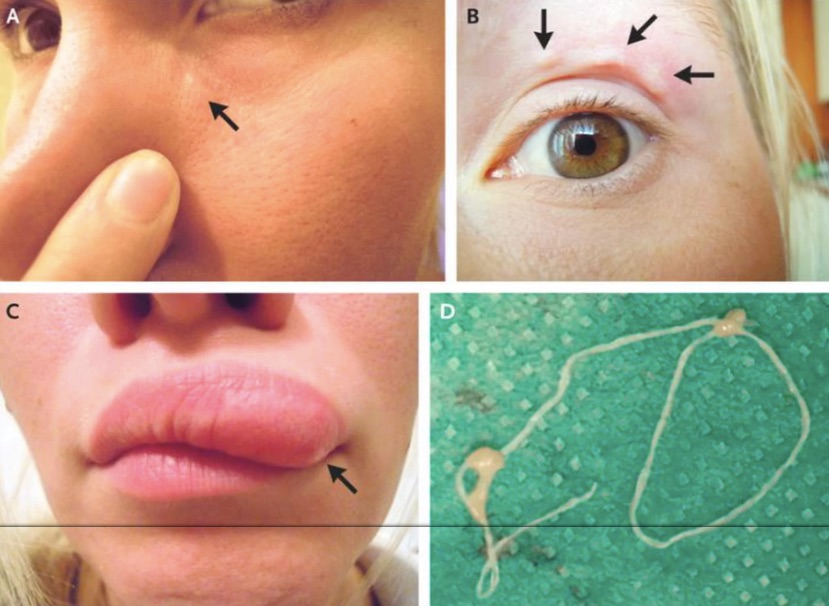 This eye worm, once only found in livestock, is cozying up to humans 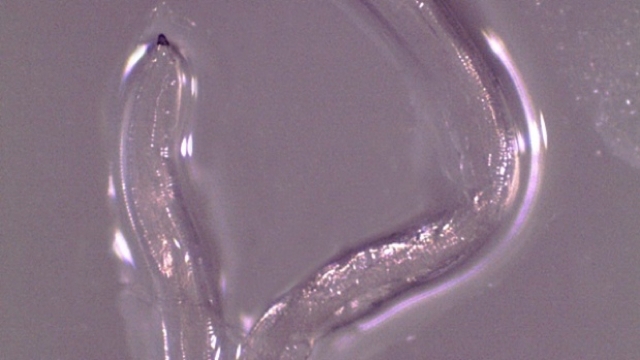 Did you know you can get worms in your eyes? According to National Geographic, it's a thing.

Back in 2016, 26-year-old Abby Beckley ended up with a bunch of the tiny, translucent critters living in and around the delicate flesh of the inside of her eyelids. Beckley described the sensation of the eye worms nesting in her as being similar to having an eyelash poking her. After much prodding and poking, Beckley managed to extract a worm from her eyelid... and then another. In total, she wound up pulling five worms out of herself before deciding that maybe checking in with a doctor might be a good idea. Beckley was in Alaska at the time that she discovered the infestation. After an initial consultation with the doctors there, she decided to head to Portland to hook up with an ophthalmologist who was able to snag yet another worm from her and send it to the CDC for analysis.

It turns out that the worms living in Beckley's head are called Thelazia gulosa – a parasite normally found in the eyes of livestock. The parasites are spread to a host when a face fly lands on an eyeball, like Beckley's, and begins drinking the sweet, delicious tears that keep it lubricated. The parasites, which gestate in the digestive tracts of the face fly, get passed on to the owner of said eye, where they mature until, finally, BOOM: eye worms.

By the time Beckley was declared free of the parasite, she'd pulled 14 of the little buggers out of her eyelids. Read the rest

Man killed by his tapeworm's cancer 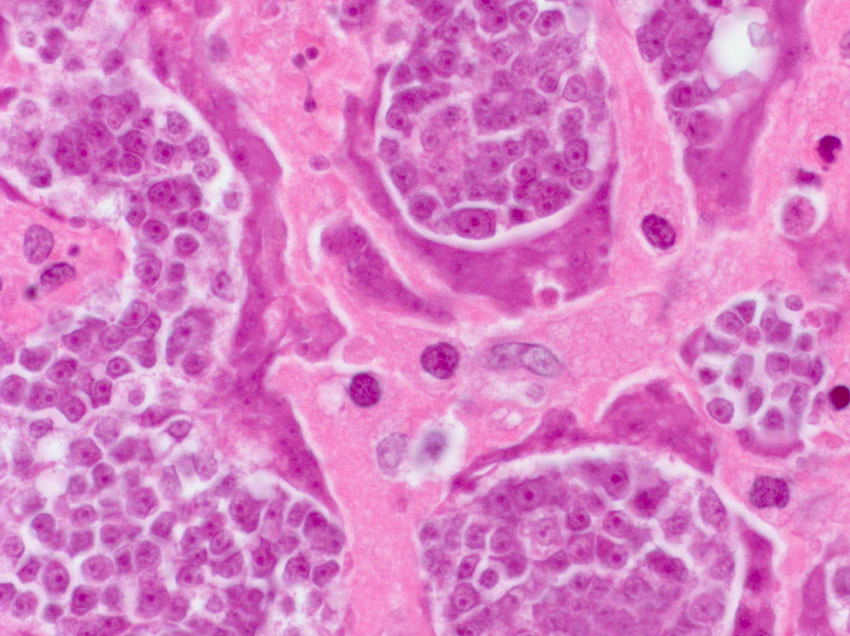 A Colombian HIV-positive man who'd gone off his meds died when a tapeworm in his body developed cancer and spread tumors to his lungs. It's the first known case of a person dying of a disease that had infected their parasite. Read the rest

The deadly infectious diseases that were eradicated in America during the 20th century are now roaring back, thanks to growing poverty, failing sanitation, and underinvestment in science and health research and regulation. Read the rest 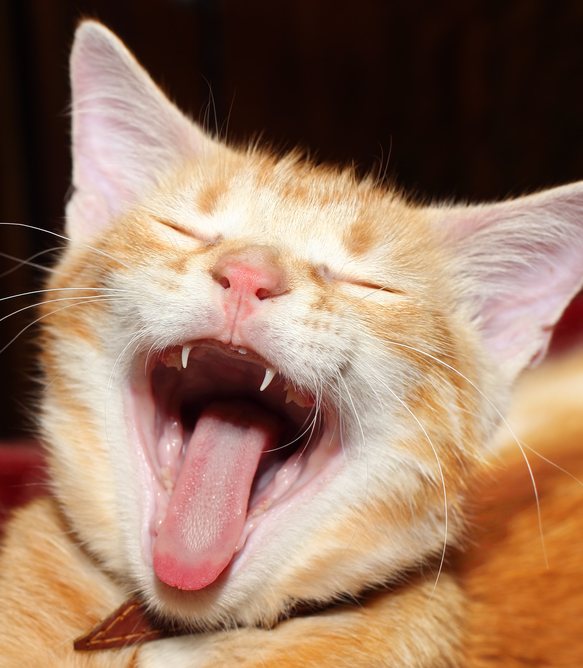 Toxoplasma gondii is a single celled organism that lives in the guts of cats and is spread to humans through contact with cat crap. About a third of the human population is infected with it. It resides in the brain and muscles, and doesn't always cause symptoms. But a new study at the University of Iowa and Florida International University has linked Toxoplasma gondii to reading and memory difficulties in children. The study also suggests that vitamin E can reduce the effects.

Infected rats are already known to lose their fear of cats, making it more likely that they will be killed and eaten. This is advantageous to the parasite, since it reproduces inside the intestines of cats. The organism's egg-like oocysts are shed in cat faeces which may then contaminate food or infect other animals. Some studies have suggested that Toxoplasma gondii can alter the behaviour of humans too, making men more aggressive and even causing women to cheat on their husbands. Other research has pointed to a strong link between the parasite and schizophrenia. 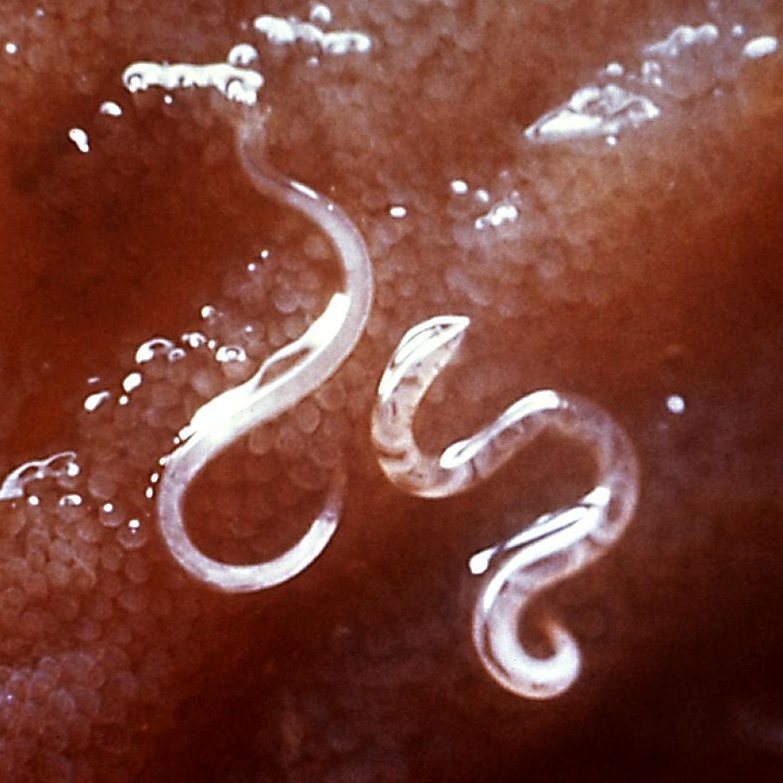 Researchers at Washington State University found that Aka people of the Congo basin who smoke cannabis have "significantly lower rate" of parasitic worm infection compared to non-cannabis users. Read the rest

Mind-controlling parasites (and the parasites that infect them)

A great, full-body-squick-inducing article in National Geographic provides an overview of the current research on parasites that use a combination of techniques to control their hosts' behavior, making them sacrifice themselves for the sake of the parasites and their offspring. Read the rest

Thermalstrike's heated luggage has plug-in elements that heat the contents of your bag to 140F before you unpack them, which should theoretically kill any bedbugs that hitched a ride home with you from the road (remember to take out your toiletries and electronics first!). Read the rest

Crowdfunded mosquito-confusing patch to be sent to Uganda

The Kite Patch is the subject of a very successful Indiegogo fundraiser, and holds the promise of a lasting peace between mosquitoes and humans. It bears a compound designed by UC Riverside entomologist Anandasankar Ray that confuses mosquitoes' ability to track and follow concentration gradients of CO2, which is how they locate humans. However, the product couldn't be marketed in the USA without further testing, hence the crowdfunding campaign, which will send thousands of patches to Uganda, where they will be used as part of a wider trial in fighting malaria and other mosquito-borne diseases. The actual nature of the compound is confusing: the Wired article describes it as both "toxic" and "nontoxic" and the crowdfunding FAQ calls it "nontoxic." Read the rest

Tracy Miller, New York Daily News: "Toxoplasma gondii, the parasite that causes toxoplasmosis, can cause health problems in anyone, not just pregnant women and those with compromised immune systems, researchers warn in a newly published paper." Read the rest

Video game lets you kill the most scientifically accurate zombies yet

The Last of Us is a new video game about the zombie apocalypse. But not just any zombie apocalypse. The Last of Us zombies are based heavily, and accurately, on a genus of parasitic fungus that really does take over the brains and bodies of non-human animals like tarantulas and ants. Kyle Hill has a lot of delightfully horrifying things to tell you about this fungus at the Overthinking It blog. Read the rest

Parasitic wasp sanitizes its victims from the inside out

So, the downside is that you are being eaten alive, from the inside out, by a wasp larva. On the plus side, though, at least it has the courtesy to disinfect you as it goes along. At Nature News you can watch a baby cockroach wasp burrows around through the insides of an American cockroach, leaving a trail of clear, liquid anti-microbials in its wake. Read the rest