Watch: Water spout surprises couple when it turns into a tornado 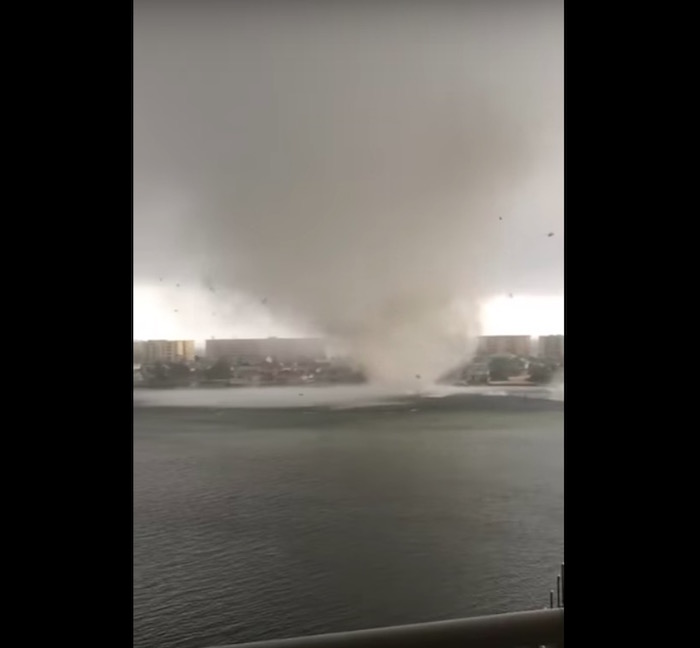 This tornado on the Gulf Coast started out as a water spout when a couple first started recording it from their condo across the water on Sunday. The woman then realizes it's a tornado, but at first the man disagrees, insisting it's still a water spout. Finally it builds up speed and starts crossing the water, towards Fort Walton Beach. "Oh my God! Oh my God!" she shrieks.

"Get inside!" he tells her. Meanwhile he stays out on the balcony to keep recording.

The tornado "moved a pickup truck out of its parking space," according to The Washington Post, and destroyed at least one house, but luckily nobody was hurt. Read the rest

Watch this drone footage of a tornado

Drone footage of a tornado touching down yesterday in Hutchinson, Kansas. Read the rest

How to: Protect people from tornadoes

A couple of weeks ago, I posted about a story I'd written on the socio-cultural systems that underly natural disasters — how the way we think, and build, and think about buildings affects who dies and who doesn't. If you'd like to dig into that a bit deeper, Andy Revkin recently pointed me toward several stories he's written at the Dot Earth blog, about designing safety systems, buildings, and cities in ways that allow them to better stand up to the threat of a tornado. Read the rest

Why Oklahomans don't have basements

Seriously now. Why don't people in central Oklahoma have basements to protect them from tornadoes? The answer, according to the engineers and geologists I spoke with for a column at Ensia magazine, is almost entirely cultural. In fact, people who study disasters say that all natural disasters are really cultural ones — created when environmental forces run headlong into complex human social systems. And that presents an interesting question: How do you protect people from tornadoes in a state where most people don't want a basement? Read the rest

Your car is not a tornado shelter

Last Friday, a tornado near El Reno, Oklahoma killed scientist Tim Samaras, as well as his son and a colleague. The three were tracking the storm in a vehicle — storm chasing, if you will — as part of their ongoing efforts to deploy probes that could capture high-resolution video from inside a tornado. (Samaras' team was one of many practicing a type of science that can basically be described as Twister in real life.) Chasing storms was an important part of what Samaras did. National Geographic reports that tornadoes only developed in roughly two of every 10 storms Samaras tracked, and the probes were only useful in a fraction of the tornadoes they were deployed in.

Samaras' death is tragic, but he wasn't some untrained yahoo out running around on county roads in a tornado for fun. He was there to do a job; a job that would, eventually, help other people survive. That said, if a situation kills experts, you probably don't want to be that untrained person trying to navigate it on your own.

Which brings us to a key point. After a handful of people who survived the Moore tornado credited their survival to driving away from it, people in Oklahoma City apparently responded to Friday's storms by trying to do the same thing. For some, it worked. But others were killed or injured when traffic on highways in the tornado's path ground to a complete halt, clogged with cars full of people who were (either accidentally or intentionally) trying to flee the storm instead of hide from it. Read the rest

Matthew says: "Charles Gafford lives in Moore, Oklahoma and held his smartphone out the window of his shelter to film up-close footage of the May 20th tornado." (Via Laughing Squid) Read the rest

Who are these crazy people out chasing tornadoes?

National Geographic News has an interview with Tim Samaras — an engineer, a scientist who studies severe storm systems, and a tornado chaser. Not all chasers are professionals like this. For many people, it's a hobby often motivated by a desire to help keep other people safe. Personally, I see a lot of similarities between hobbyist tornado chasers and the HAM radio folks — in fact, there's a lot of overlap between the two communities. And, as Samaras explains, if you want to get involved, there's training you really ought to do first. Read the rest

How do tornadoes form?

Scientific American has a great video that quickly explains the basics of tornado formation — facts that also help explain why some parts of the country, including Oklahoma, are more prone to tornadoes than others. You'll also learn about worst tornado in recorded history, which killed more than 700 people.

The photo above was taken near Moore, Oklahoma yesterday. My father lives in Oklahoma City (thankfully, outside the path of this monster), and this shot comes from a friend of a friend of his, who wished to remain anonymous. Read the rest

Chris Tangey took this intense image of a tornado sucking a brushfire into the sky near Alice Springs, Australia. From The Australian:

"There was no wind where we were, and yet you had this tornado," Tangey says.

For him, it sounded "like a fighter jet"; for (firefighter Ashley) Severin, it was like "standing behind a 747". "I've never seen anything like it. I just thought the ground was going to start trembling," Severin says. "The noise it was making, the speed, the red flames in the centre of it. It was like a kaleidoscope show."

Sixty-one years of tornadoes, in one map

John Nelson—the data visualization designer responsible for that global map of earthquakes I posted last week—has also made a strangely beautiful map showing every tornado to hit the U.S. between 1950 and 2011.

Part of what makes this map interesting is that it shows not only the touchdown location, but also the path of the tornado as it moved. Better yet, Nelson has several other related maps that break the data down in different ways. For instance, if you look at the tornado map broken down by seasonality, you can see a really amazing pattern, where what constitutes "Tornado Alley" appears to move northward over the course of the year. In December, January, and February, the bulk of tornadoes have been centered on south and south-central states like Mississippi, Texas and Kentucky. In peak tornado season—March, April, and May—the southern states are still affected, but the reach of the tornadoes has extended north and west. By June, July, and August, most of the tornado activity is happening in states like Michigan and Minnesota.

Another interesting thing I spotted on these maps: There's a hole in tornado activity centered on West Virginia. All around the state, there's a history of tornadoes. In the Mountain State, though, the number of tornadoes drops off precipitously. I'm really curious what's causing that, or whether it's a flaw in the data.

Compare tornado habits throughout the seasons

Compare tornado history before and after the historically devastating 2011 season.

Watch an animation of tornadoes by year Read the rest