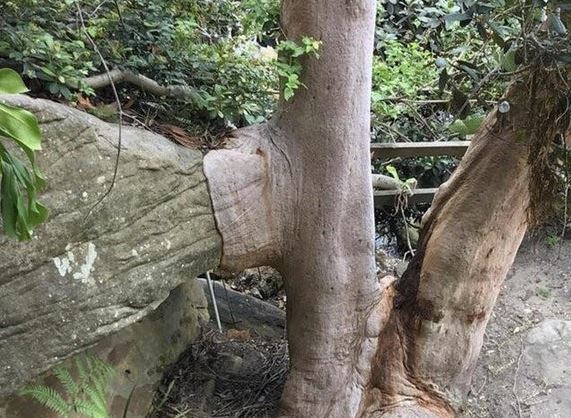 Trees Sucking on Things is my new favorite subreddit. It's dedicated to trees that have grown around unusual objects, thereby giving the impression of "sucking" on them. Pictured here is an example from getyerhandoffit. Read the rest 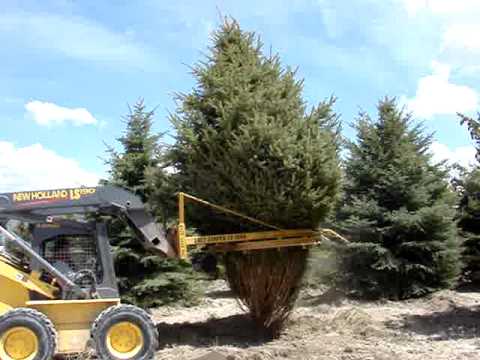 There's so much Florida goodness in this footage.

I found the square root 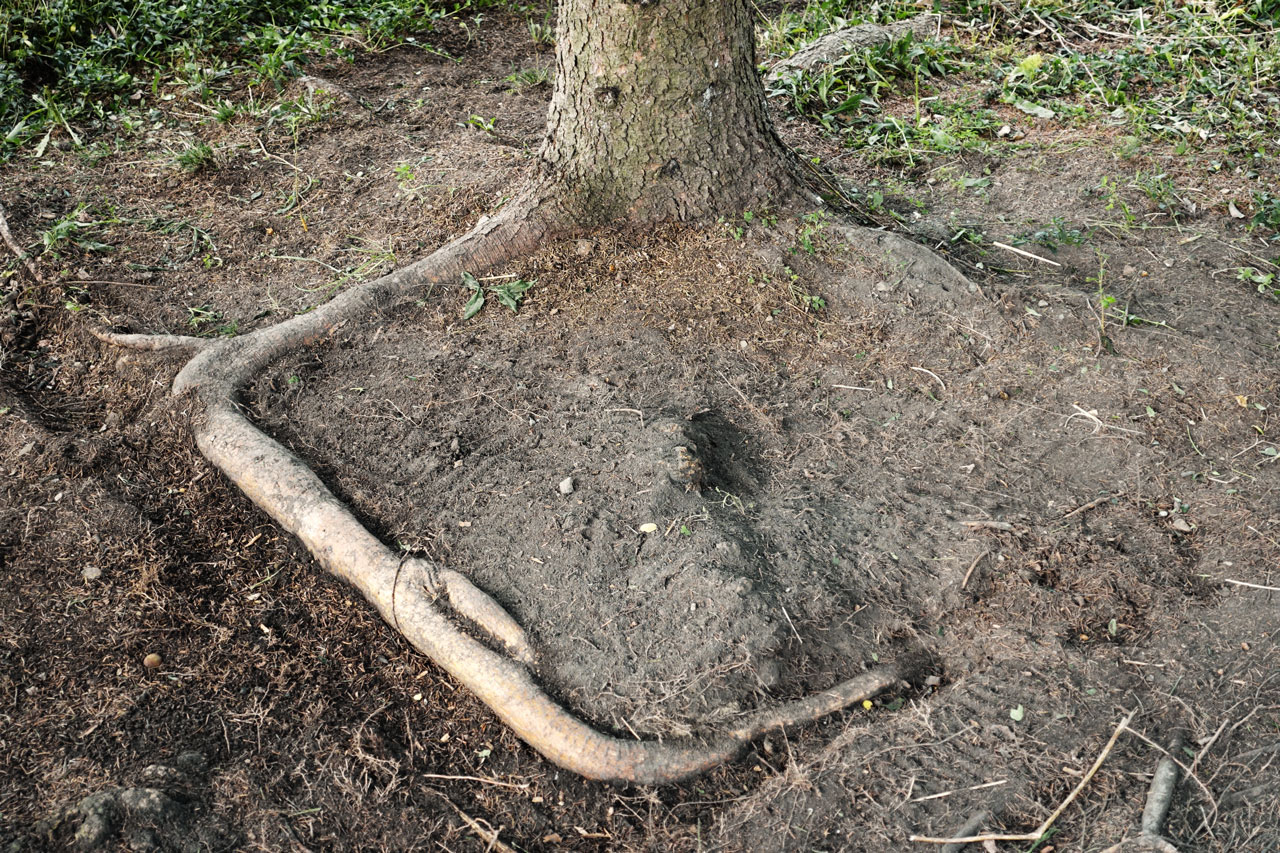 The planter of this fir tree used railroad ties to create a deeply-embedded square border around it. As it grew, the roots took their shape, to be revealed after removing the now-rotten wood many years later. Read the rest 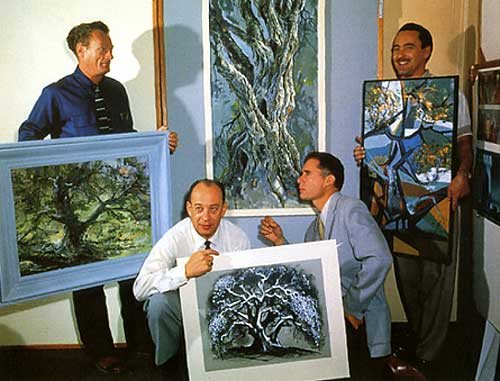 4 Artists Paint 1 Tree is a short documentary released by Disney in 1958, in which four of its best animators (then working on Sleeping Beauty) each paint the same old oak tree. An illustration of the depth of artistic brilliance and individuality informing the technical uniformity of an animated feature, it's well worth 15 minutes of your day.

They're all great, but my favorite is Eyvind Earle's, top, closely followed by Josh Meador's on the left. To the right, Walt Peregoy ("Walt Disney was a shit. We made Walt. Walt didn’t make Walt. Walt was an asshole.") holds his modernist rendering. At bottom is Mark Davis, whose technique seems delightfully contemporary. [Thanks, Wendy!] Read the rest

These incredible trees can "walk" 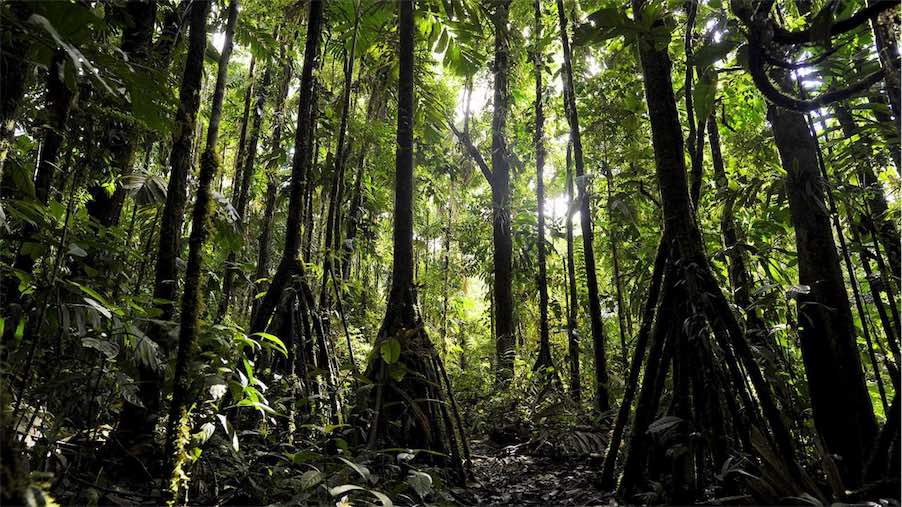 These are the "walking palm trees" of Ecuador. Each year, they could walk as much as 20 meters. Slower than the Ents from Lord of the Rings but, well, real.

“As the soil erodes, the tree grows new, long roots that find new and more solid ground, sometimes up to 20m,” Peter Vrsansky, a palaeobiologist from the Earth Science Institute of the Slovak Academy of Sciences Bratislava, tells the BBC. “Then, slowly, as the roots settle in the new soil and the tree bends patiently toward the new roots, the old roots slowly lift into the air. The whole process for the tree to relocate to a new place with better sunlight and more solid ground can take a couple of years.”

Tragically, the incredible Sumaco Biosphere Reserve where they live is being chopped down.

“This [cutting] is a shame, as Ecuador is one of the world countries with the highest partition of protected areas," Vransky says, But the trees can’t walk fast enough to escape the chainsaw and the machetes backed by current legislation." Read the rest 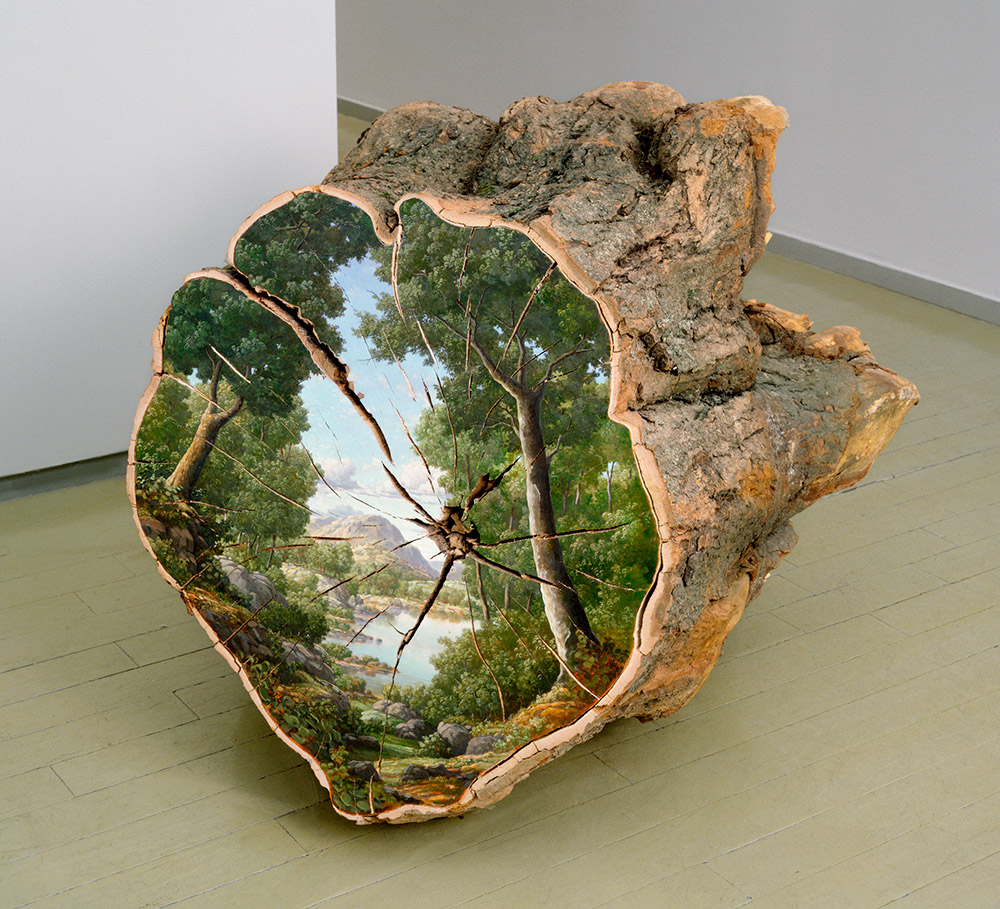 Alison Moritsugu paints beautiful landscapes, including some on slices of trees that make the logs resemble portals onto the natural scenes in which they grew. Her new work, a collection called titled "inconsequence / in consequence," will be exhibited at the Littlejohn Contemporary gallery in New York City from November 12 through December 12, 2015. 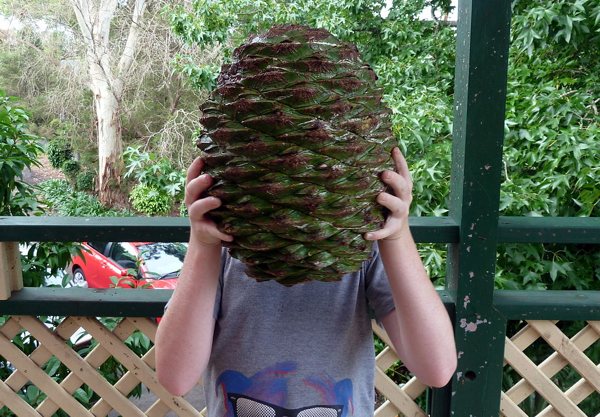 A 16-pound pine cone fell on Sean Mace's head in San Francisco, and crushed his skull.

He is suing the U.S. government, the National Park Service, the Department of the Interior, and the San Francisco Maritime National Historical Park for $5 million.

Edward Scissorhands has got nothing on Chuck Berry's two-handed Christmas tree trimming at Berry's Christmas Tree Farm in Covington, Georgia. (via Digg)

Beautiful video of the giant redwood trees of Northern California 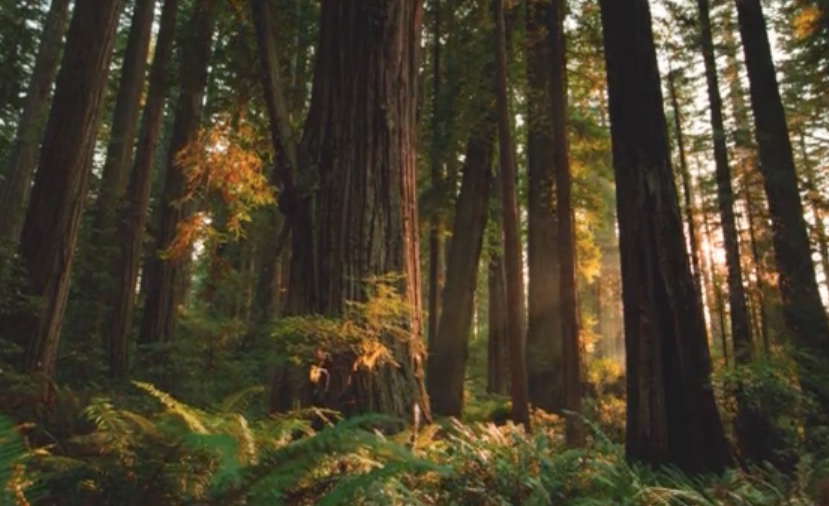 More Than Just Parks (MTJP) immerses us in the Redwood National and State Parks to see the tallest trees in the world. What you see in this video is literally in my backyard and I feel so fortunate that I can immerse myself in such beauty just by stepping outside.

Redwood National and State Parks in Northern California are home to the tallest trees in the world, the mighty Redwood, which can reach staggering heights of over 360ft and weigh more than 500 tons. These parks feature magical forests, miles of spectacular beaches, stunning overlooks, and the largest herd of Roosevelt elk on the planet. This film was shot entirely in 4K.

Crown shyness - when trees don't like to touch each other 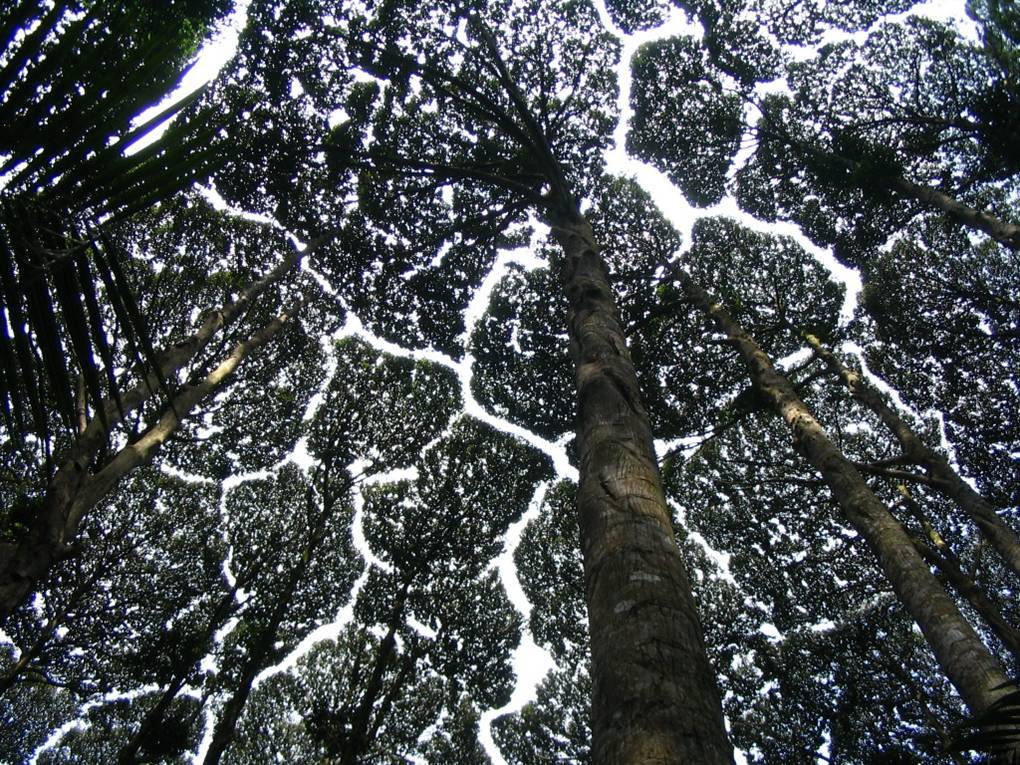 This incredible photo is an example of "crown shyness," a phenomenon in which the crowns of trees maintain a little personal space between each other. Scientists have been trying to figure out why trees do this.

Malaysian scholar F.S.P. Ng offers competing hypothesis. According to Wikipedia, he "found no evidence of abrasions due to contact in that tree. He suggested that the growing tips were sensitive to light levels and stopped growing when nearing the adjacent foliage. In Betula pendula (silver birch), fewer buds develop in parts of the crown that are already dense or where the crowns of different trees start meeting, possibly because of less light."

Another reason tree crowns are shy might be to slow the spread of leaf-eating insect larvae.

Study: World has 8x the number of trees we thought 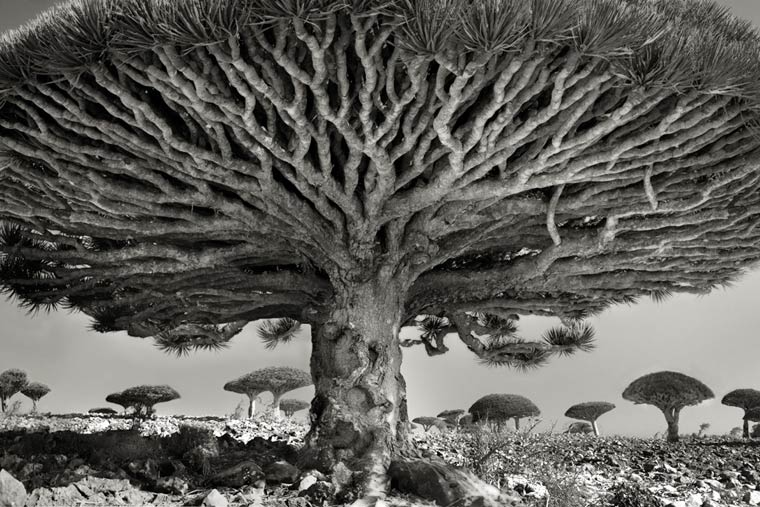 There are about 3.04 trillion trees on planet earth, rather more than the expected 400 billion, reports Nature. But it's not good news. Read the rest 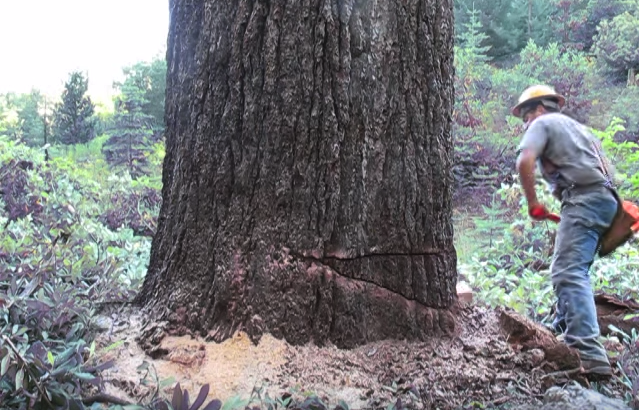 There's a wonderful little corner of YouTube where stoic burly men wander deep into the woods and chop down tall trees with chainsaws.

Devised by Vietnam's Vo Trong Nghia Architects as a response to the nation's rapid development: "only .25 percent of the land in Ho Chi Minh City is covered in vegetation," writes Wired's Margaret Rhodes.

On Sunday, the hallowed nonprofit Henry Miller Memorial Library in magical Big Sur, California will auction off large slabs of old-growth redwood sliced from a 200-foot, 500-year-old tree that fell on the site a couple years ago.