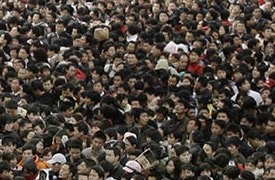 At least 100,000 people became stranded at the Guangzhou Railway Station southern China. They were trying to get a jump on Chinese New Year, which starts next week. The image above is a small portion of a photo that will send a chill down the spine of agoraphobics.

Over 100k passengers trapped in Guangzhou Railway Station on Mon, due to train delays in #SpringFestival travel rush pic.twitter.com/DcajMP3oAq

Aerial photographs published by one website showed a crush of bodies snaking towards the train station through metal barricades. About 176,000 passengers had been due to pass through the station on Monday alone.

“There are too many people and it is too crowded,” one stranded passenger, who was not named, told state broadcaster CCTV.

A 40th floor view of the crowd instantly filling NYC's Bryant Park on Sunday night for a free showing of Ghostbusters. Read the rest

StoryShift is a new storytelling medium. Why hasn’t it caught on?

A satellite imaging company is looking for volunteers to help comb through satellite pictures for evidence of Flight MH370. Read the rest

We have this idea that physical crowds are stupid herds. Give them half a chance, and they'll form a stampeding riot mob driven by emotion. Look at history, though, and you'll see many examples of large groups of people being perfectly well-behaved. In fact, in disaster situations, like on 9/11, crowds can even organize themselves in practical ways to help others to safety.

Meanwhile, we tend to talk about virtual crowds — the kind that form online, or between physically distant members of a professional community — as smart. But if that's always true, why do these groups get caught up in financial bubbles and why isn't Twitter a more reliable place to pick up breaking news?

Physical crowds and virtual crowds are different things. But our stereotypes about them stem from a common problem. In both cases, we tend to treat "the crowd" as if it's a distinct entity — as if, at some point, individuals in a group stop being themselves and start to become limbs of a crowd creature. In my latest column for The New York Times magazine, I learned that that's not the way people work in real life. As Clark McPhail, emeritus professor of sociology at the University of Illinois at Urbana-Champaign, told me, "Crowds don't have a central nervous system."

Gustave Le Bon was one of the first people to write about crowds as entities separate from the people in them. His 1895 book, “The Crowd: A Study of the Popular Mind,” shaped academic discussions of human gatherings for half a century and encouraged 20th-century fascist dictators, including Benito Mussolini, to treat crowds as emotional organisms — something to be manipulated and controlled.

The physics of crowds can kill

Almost two years ago, 21 people died when they were crushed to death in the crowd at the Love Parade music festival in Germany. Now, scientists have been able to pinpoint exactly what lead to those deaths. Here's a hint: It wasn't a stampede, there's no evidence of intentional pushing, and it doesn't look like mass hysteria had anything to do with the deaths. So how did those 21 people die? Physics. (Via Jennifer Ouellette) Read the rest

This is a small thing now, but could become more interesting in the future. American Public Media (the people behind a lot of the shows you hear on NPR) have a project called the Public Insight Network, which connects journalists with average people who want to share information about their hobbies, passions, or areas of expertise. The PIN is pretty cool and it just acquired Spot.Us—a crowdfunding site aimed specifically at producing high-quality journalism. Like I say, I have no idea where this is headed. But it could be neat. It's definitely a collaboration I'll be keeping an eye on. Read the rest

Reddit poster mdrabz is a middle school science teacher who just got a $5500 state grant to set up a lab for his 7th and 8th grade students in the Mississippi Delta. How do you choose what to buy with that money? Mdrabz turned to the Internet for suggestions.

Answers range from the inevitable Breaking Bad jokes (which begin, amusingly, with advice to "Cook meth, obtain more currency") to some really great suggestions for basic necessities of a science lab, ideas for actual experiments, and other posters waxing eloquent about the lab experiments they loved when they were in school. It's inspirational, and some great advice for anyone looking to get young minds hooked on science.

I can't wait to find out what mdrabz actually puts together. My memories of science in school are inevitably tied up with my memories of hands-on projects: From the basic electric circuits my 4th/5th grade teacher had us build, to rocket cars in middle school, to fetal pig dissections in high school. Even the hands-on work I HATED (*cough*CAD module*cough*) has a bigger place in my memory than half the stuff we only read about.

With that in mind, I'd throw out a suggestion to spend some of that money on art materials that the kids could use for building models and dioramas. I understood chemistry better when I had to connect marshmallows and toothpicks to build molecules, I remember the parts of a cell better because of the dioramas we made. For my money, you get a hell of a lot of bang for the buck out of giving kids access to a way to learn the material that's a bit more visceral than books and video. Read the rest