Watch: Ocasio-Cortez responds to dance-phobic Republicans with a new dance on Capital Hill 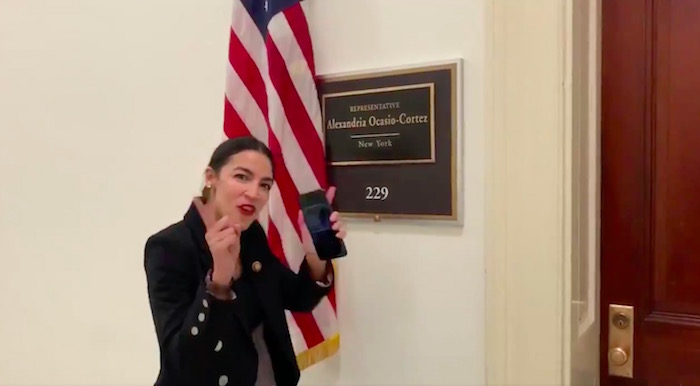 In response to the old-fart Republicans who thought they finally had a gotcha moment by digging up a college dance video of Congresswoman Alexandria Ocasio-Cortez, she fired back with the best tweet of all – a new dance inside a hall on Capital Hill.

Granted, this one isn't nearly long enough, or as joyous as her first one, but it's still fantastic. Notice how she comically peeks over her shoulder before she begins. Once she realizes the coast is clear, she dares to dance to Edwinn Star's "War."

I hear the GOP thinks women dancing are scandalous.

Wait till they find out Congresswomen dance too! 💃🏽

Have a great weekend everyone :) pic.twitter.com/9y6ALOw4F6

In case you missed it, here is Ocasio-Cortez's "scandalous" dance that threw frightened Republicans into a tizzy.

Thank you, DJ Cummerbund. Thank you for perfectly combining Pearl Jam's "Jeremy" and Kenny Loggins' Footloose theme (and a little of Tina Turner's "Proud Mary" too) into "Jereloose." That was thoroughly enjoyable.

YouTube commenter Ramanan amusingly calls it "the jauntiest song about a school shooting since Pumped Up Kicks!﻿"

I recently saw a preview for another remake of a movie I cherished as a child: Footloose. As with The Karate Kid, my initial reaction was one of disdain for Hollywood. And then I talked to the remake's director, Craig Brewer, whose own passion for the original film trumps mine, fifteenfold. Unlike other coming-of-age high school films of the era like The Breakfast Club and Sixteen Candles, which left Brewer dreading the transition from junior high to high school, Footloose felt like seeing his life story in a film. Between Lori Singer's racy woodland escapades, her pot-smoking boyfriend, and Kevin Bacon's rock out session in the warehouse, Footloose "both terrified me and excited me because I felt that the movie was speaking to my experience and no movie had done that to me yet." Brewer loved the movie so much that when he realized his VCR audio outputs could be connected to the audio input on his boombox, he wasted no time in recording and memorizing the entire audio track, dialogue and all. Brewer sat down with me to talk about the film, its soundtrack, and the genre of the remake.

BB: How did you get involved in making this film?

CB: Paramount was already down the road with a different version of it. It was going to be a little more like a dance celebration of Footloose. And they decided to change their mind. Adam Goodman, who's the head of Paramount, he came in and he was like, "You know, Footloose has a certain spirit. Read the rest