25% of people shot to death by LA police were unarmed. No cops were prosecuted. 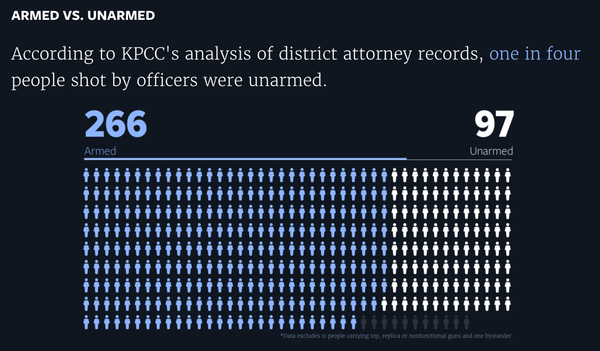 Between Jan. 1, 2010 and Dec. 31, 2014, Los Angeles County district attorney records show at least 375 people were shot by on-duty officers. No officers have been prosecuted for any of those shootings.

About one in four of those people were unarmed.

That's the lede from Southern California Public Radio KPCC's important, interactive investigative report on “officer-involved shootings” in LA, and there's a lot more to be upset about in those numbers, too.

Will the FAA stop prohibiting electronic devices on commercial flights?

As I noted in a Boing Boing post yesterday, there's news of a possible change ahead for in-flight gadget rules in the US.

The Federal Aviation Administration currently prohibits passengers from using electronic devices on commercial flights when the plane is below 10,000 feet in altitude. But the FAA announced this week that after widespread demands to modify restrictions, there may be new efforts to review whether devices like the iPad or phones in "airplane mode" can be permitted safely during takeoff and landing.

Aviation journalist and pilot Miles O'Brien, who uses his iPad for navigation while flying his own plane, joined KPCC's Patt Morrison show today to discuss the news. Here's a direct MP3 link to the radio segment. It's a good listen. Read the rest