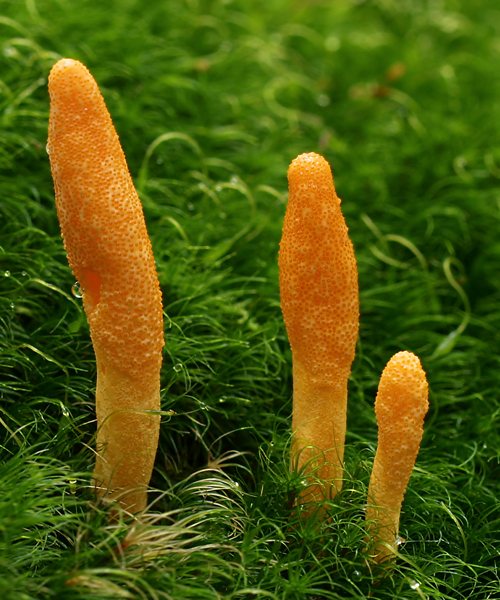 Yartsa gunbu (summer grass-winter worm) is a fungus that parasitizes moth larvae by devouring them from the inside-out and sprouting from their exoskeleton. It has been used for centuries by Tibetan and Chinese doctors to "improve breathing, metabolism, sexual function, mental clarity, and more."

Demand for the mushroom has skyrocketed, according to Epoch Times:

Tibet has enjoyed a vigorous caterpillar fungus trade with China for centuries, but in recent decades prices have skyrocketed. A pound of yartsa gunbu was less than two dollars in the 1970s, and close to $100 in the 1990s. Today, a pound of high quality specimens could sell for as much as $40,000 or more. Total revenue from yartsa gunbu comes to about a $1 billion a year.

Ecologist and mushroom specialist Daniel Winkler says, “I know Chinese people whose friends are willing to spend half of their income on this, because they feel like, ‘Well, I’m getting old. I’m falling apart. This buys me life.’ That’s why people are willing to pay this incredible amount." Read the rest

In this week’s episode of the Cool Tools Show, Gary Wolf, Co-founder of Quantified Self, shows us how his favorite Quantified Self inspired apps help him stay consistent, motivated and aware about his most important daily routines. If you’re struggling to keep your healthy habits in check, this week’s episode may help you diagnose where those dips in motivation are coming from. Read the rest

Firebox sells four varieties of rubber mushrooms designed to reduce symptoms of stress. They are described as being "slightly phallic" in appearance. Read the rest

The Daily Grail delves into Frank Herbert's passion for mycology and how psilocybin mushrooms helped inspire Dune. Read the rest

To do in NYC, Sep. 8, 2012: Celebrate John Cage's love of foraged wild mushrooms

To celebrate the 50th anniversary of the New York Mycological Society and the 100th birthday of the composer John Cage, its founder, there will be an exhibition on mushrooms and Mr. Cage’s passion for them on Sept. 7 and 8 at the Cooper Union, 7 East Seventh Street (Third Avenue). Admission is free. On Sept. 8 from 8 to 11 p.m. there will be a performance of some of Mr. Cage’s works with film and photographic backdrops about mushrooms. Tickets benefit the society: $20 to $100, $5 for students, for the show. A pre-performance dinner at the home of the author Eugenia Bone is $200 a person, including the show, or $350 for two, from newyorkmyc.org.

The late composer's love for 'shrooms was famously documented in the book "For the Birds," which was reviewed by the Times here in 1981.

Wednesday, September 5, 2012 would have been the 100th birthday of John Cage. Events around the country commemorating his life are gathered in this LA Times item.

(Thanks, Jerome Mercier!) Read the rest

The nature films of Louie Schwartzberg

[Video Link] When I was at TED earlier this year, I happened to sit down next to film maker Louie Schwartzberg. He makes gorgeous nature films. I recently watched the videos on his YouTube channel. They are all stunning.

This video was shown at the TED conference in 2011, with scenes from "Wings of Life," a film about the threat to essential pollinators that produce over a third of the food we eat. The seductive love dance between flowers and pollinators sustains the fabric of life and is the mystical keystone event where the animal and plant worlds intersect that make the world go round.