This soft, inchworm robot changes shape in response to tiny electrical or temperature changes. The power-efficient robot is made from a specialized "programmable" polymer technology that, according to the University of Toronto researchers, could someday lead to lightweight and safer robots but also enable other kinds of smart materials. From EurekAlert!:

"In situations where humans could be in danger -- a gas leak or a fire -- we could outfit a crawling robot with a sensor to measure the harmful environment," explains Naguib. "In aerospace, we could see smart materials being the key to next-generation aircrafts with wings that morph."

Though he points out it will be some time before the world sees morphed-wing aircrafts, the most immediate impact will be seen in wearable technology.

"We're working to apply this material to garments. These garments would compress or release based on body temperature, which could be therapeutic to athletes," says Naguib. The team is also studying whether smart garments could be beneficial for spinal cord injuries.

"In this case, we've trained it to move like a worm," he says. "But our innovative approach means we could train robots to mimic many movements -- like the wings of a butterfly." 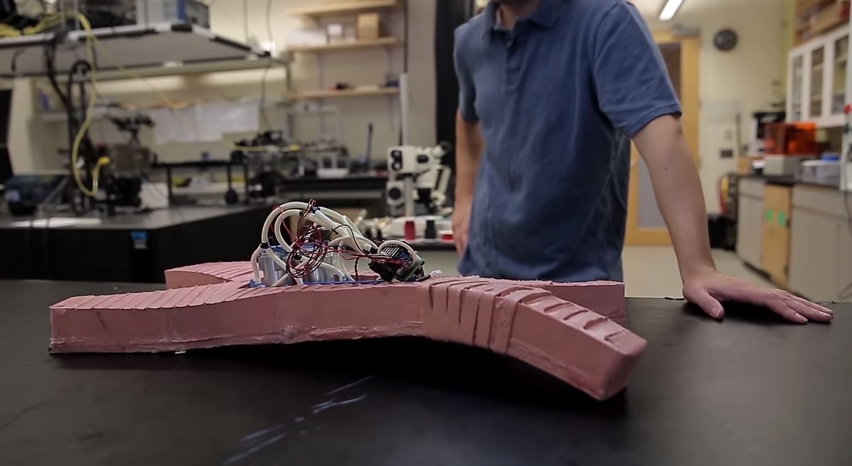 Harvard University released video of this unnerving soft robot that can move untethered through punishing conditions, including snow and fire, yet will remain resilient. It looks a bit like reanimated sliced SPAM in the time-lapse crawling footage, and like SPAM, it retains its shape even when its appendages are run over by a car. Read the rest