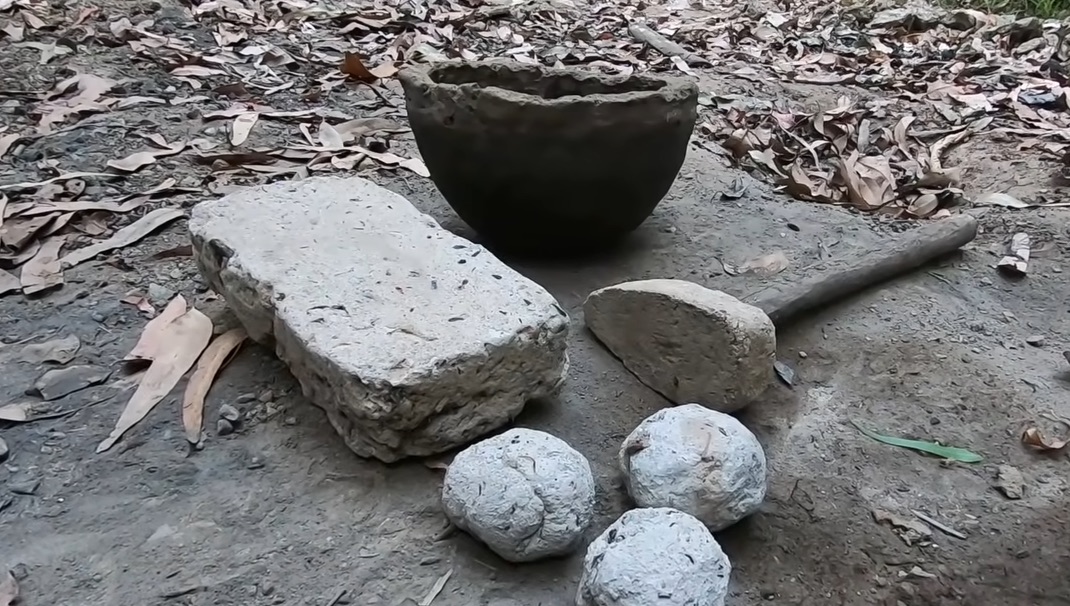 The fellow in Australia, who makes tools and shelters from his bare hands and natural materials, is back with a new video. This time, he weaves a pair of sandals for his cracked feet.

I made a pair of sandals from loya cane. Walking bare footed in the bush generally doesn't cause problems for my feet. But when repetitively carrying loads of various materials the soles of the feet become cracked and split. So I made some basic footwear for the purpose of working on rough surfaces.

I cut some cane and measured out a length 6 times the length of the foot (about 1.5 m), folded it into loops and wove more cane between the loops to form the sole, adding new cane as needed. Next, I made bark fiber cordage and threaded it through the sandal to keep it on. The pair took about 1 hour to make (longer due to setting up the camera).

The sandals do protect from the ground, preventing the feet from cracking. I personally don't like wearing footwear in the forest as bare feet give better grip, especially on inclines. But for heavy work or when my feet are injured I'll wear these. These sandals are so quick to make that I've already got 2 pairs. The material used to make them (loya cane) is everywhere here but pretty much any rope like material will do. Bark fiber rope, grass, vine, flexible roots etc. will all make usable alternative materials.

The fellow in Australia, who makes tools and shelters from his bare hands and natural materials, is back with a new video. This time, he made water-powered hammer. It's basically a log (hollowed out by fire) that pivots up and down when it receives and empties water from a stream.

This is the first machine I’ve built using primitive technology that produces work without human effort. Falling water replaces human calories to perform a repetitive task. A permanent set up usually has a shed protecting the hammer and materials from the weather while the trough end sits outside under the spout. This type of hammer is used to pulverise grain into flour and I thought I might use one to mill dry cassava chips into flour when the garden matures. This device has also been used to crush clay for porcelain production. A stone head might make it useful as a stamp mill for crushing ores to powder. It might pulp fibres for paper even. 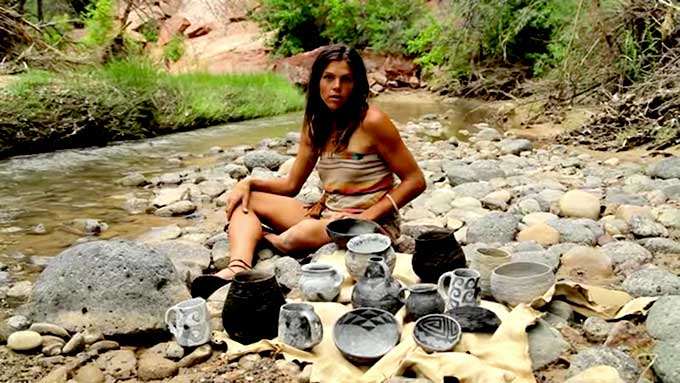 Artist Kelly Magleby, went into “the backcountry of Southern Utah with a knife and a buckskin for 10 days to try to learn about Anasazi pottery by doing it the way the Anasazi did it.” Filmmaker Steve Olpin made a short documentary called Earth and Fire, that shows how Magleby started a fire, made dyes, and baked clay pottery in hot coals. 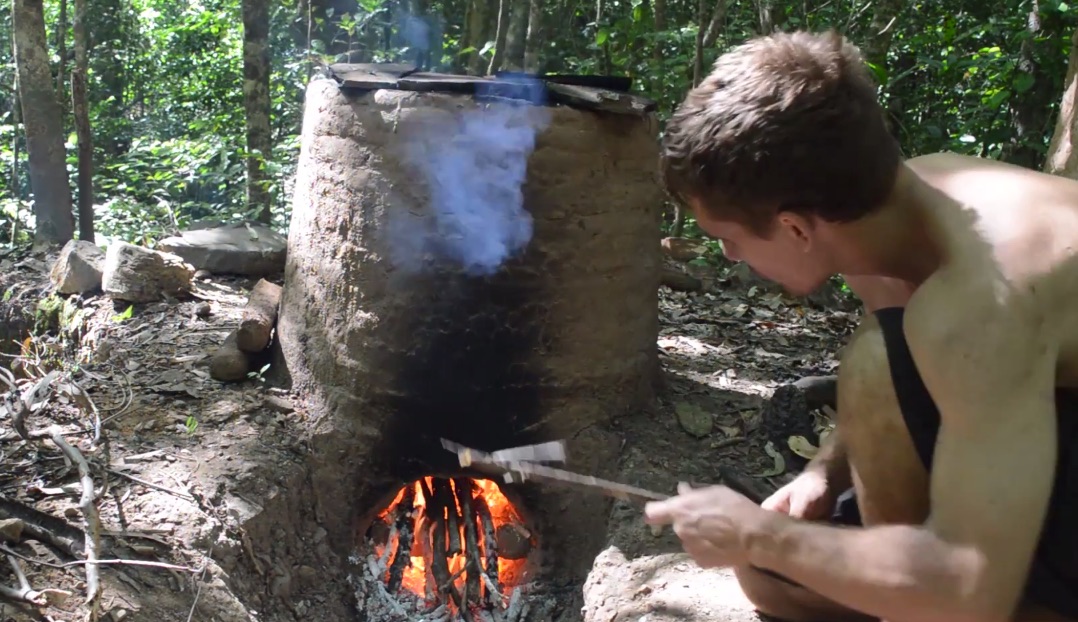 It's no secret that Boing Boing (along with over 4 million other netizens) loves the Primitive Technology channel on YouTube. We've covered this channel numerous times (about a guy making primitive tech in the wilds of Far North Queensland, Australia with nothing but the gym shorts on his ass). I anxiously await each episode and am like a kid at Christmas when I get the alert that a new one is up.

But this month, thanks to one of the reader comments, I made a cool discovery. The videos are without narration. The un-named survivalist, who some have dubbed "Prim," is really good at showing you what he's doing so that you can understand it without explanation, and he writes up decent notes that are published along with the videos. But then I saw the comment: "[Turns on captions] That clever bastard has been talking to us the entire time!!﻿" Whoa.

The captions and the notes are pretty similar, but you do get extra content in the captions and you get to see them in situ. I've been using closed captioning on my TV recently and have been delighted to see how much additional information you actually get: background conversations you would never hear, song titles and lyrics, and wonderful sound descriptions like "sexual gasping." So, it's great to discover another instance of CC being useful. Read the rest 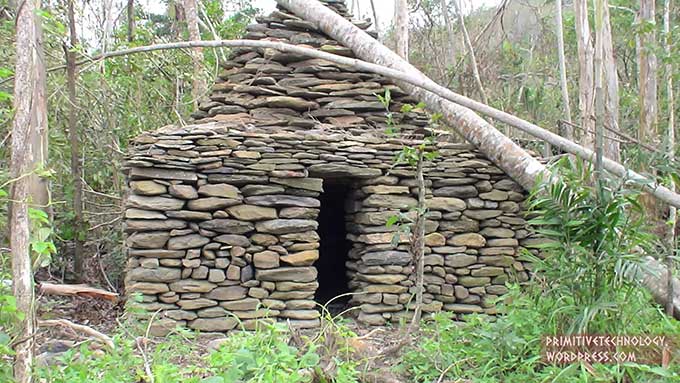 Primitive Technology is a YouTube video channel produced by an Australian guy who goes into the jungle with nothing but the clothes on his back, and makes things like shelters, tools, and weapons. There are no words or text in the video, only the sounds of nature for a soundtrack. Here's his latest video.

In this video I build a garden to grow Cassava and yams, two staple food crops. Cassava is a shrub that develops large edible roots. Yams are a climbing vine that produce large, edible underground bulbs and smaller aerial bulbs on their vines.

I had 5 huts, but the wattle and daub hut (from the first video uploaded on this channel nearly 2 years ago) became dilapidated. I abandoned it in favour of the other huts I built and neglected the roof. This let water in destroying a wall. Also, the sweet potato patch behind it had a tree fall across it destroying the fence. So I demolished them both to make one large garden.

The beginning of the video (where he tears down the old huts and other things he made) is interesting because the fall apart so easily. Nature works quickly to reclaim the stuff he borrowed from her. Read the rest 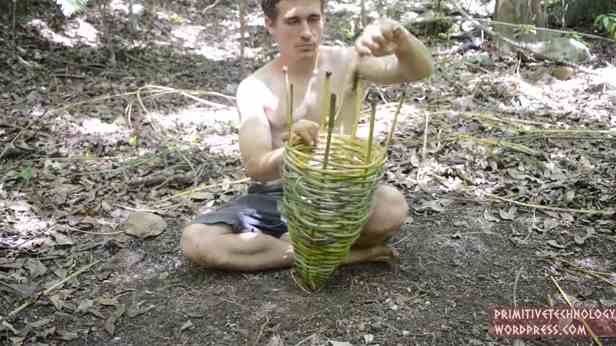 Primitive Technology is a YouTube video channel produced by an Australian guy who goes into the jungle with nothing but the clothes on his back, and makes things like shelters, tools, and weapons. There are no words or text in the video, only the sounds of nature for a soundtrack. In this episode, he weaves a trap to catch shrimp, which he puts in an earthenware jug, and then cooks them over a fire he starts with friction.

Shrimp (and fish) traps are simple traps designed to catch aquatic life due to their shape. It consists of a simple basket with a funnel shaped entrance. Shrimp easily find their way into the trap as they are funneled in, but have difficulty finding the way out.

I wove the main body of the trap from lawyer cane then made the funnel from sticks with vines woven between them. The funnel was then inserted in the top of the basket and was complete.

I put the trap in the water under some tree roots without any bait. About 10 minutes later caught the first shrimp which I stored in a pot of water. I caught another one and made a fire.

I humanely killed the shrimp using the splitting method which destroys the central nervous system (boiling alive is more painful). Then I put them back in the pot with water. I collected some yams that I planted years ago from wild stock and put them in too.

I took 5 hot rocks from the fire and put them in the pot boiling the contents.

I love the well-made "Primitive Technology" videos. In this one, the guy (I don't know his name but he live in Australia) makes a few spears and a spear thrower, using only materials he finds in the wild. He even starts a fire without matches to harden the spear points. After, we get to see him do target practice.

Q.Why don't you talk in the videos?

A.When I watch how to videos I fast forward past the talking part to see the action part. So I leave it out of my videos in favor of pure demonstration. 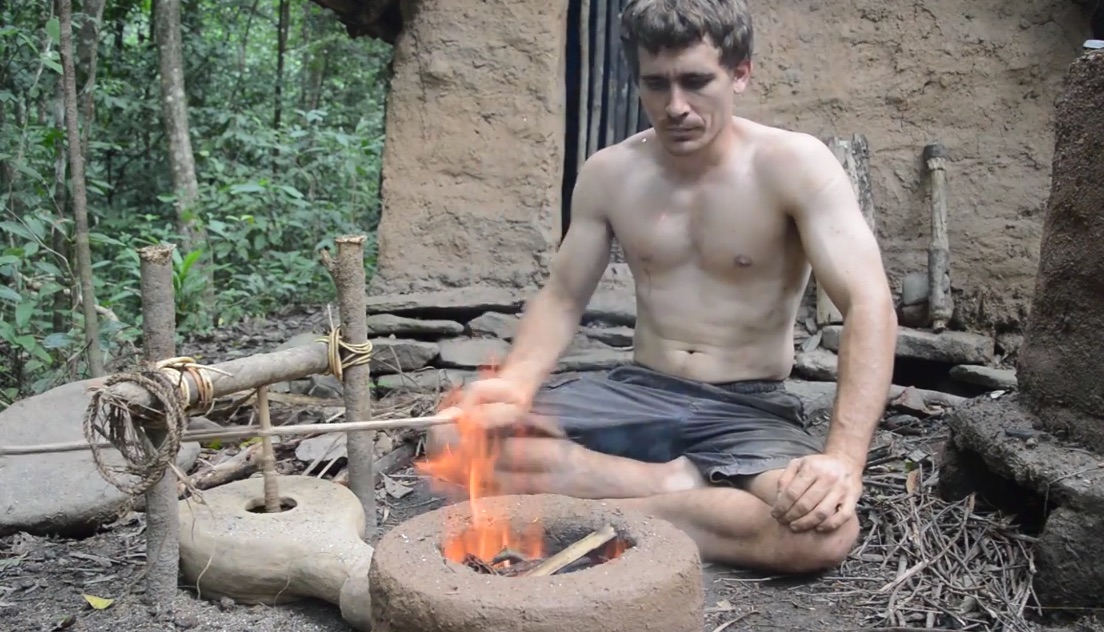 We've previously written about "Primitive Technology," the amazing YouTube channel chronicling a guy (who never identifies himself) navigating the wilds of Far North Queensland, Australia with nothing more than what he fashions with his own hands. Those hands seem to have nearly magical powers as he confidently conjures what he needs to survive from the very elements around him (while capturing it all on a future phone).

As part of my work, I spend a big chunk of my day watching DIY videos of every kind of "It" you can imagine. This YouTube channel is one where I anxiously await new content.

In this latest video, the mystery man that some have dubbed "Prim" builds himself a bow-drill blower and clay forge near the entrance to his tiled-roof mud hut. With his blower and forge in working order, he then collects orange iron bacteria (iron oxide) from the creek (that baby shit-brown substance at 3:14), mixes it with powdered charcoal (carbon for reducing oxide to metal), and wood ash (flux to lower meting point). He forms all of this into a cylindrical brick and fires it in a charcoal oven. The result is a melted iron ore slag with tiny, 1mm-sized specs of iron in it.

Congratulations, Prim! You just entered the Iron Age! On his blog, he explains that wasn't really his intent:

My intent was not so much to make iron but to show that the furnace can reach a fairly high temperature using this blower. A taller furnace called a bloomery was generally used in ancient times to produce usable quantities of iron and consumed more charcoal, ore and labour.

How to build a grass hut 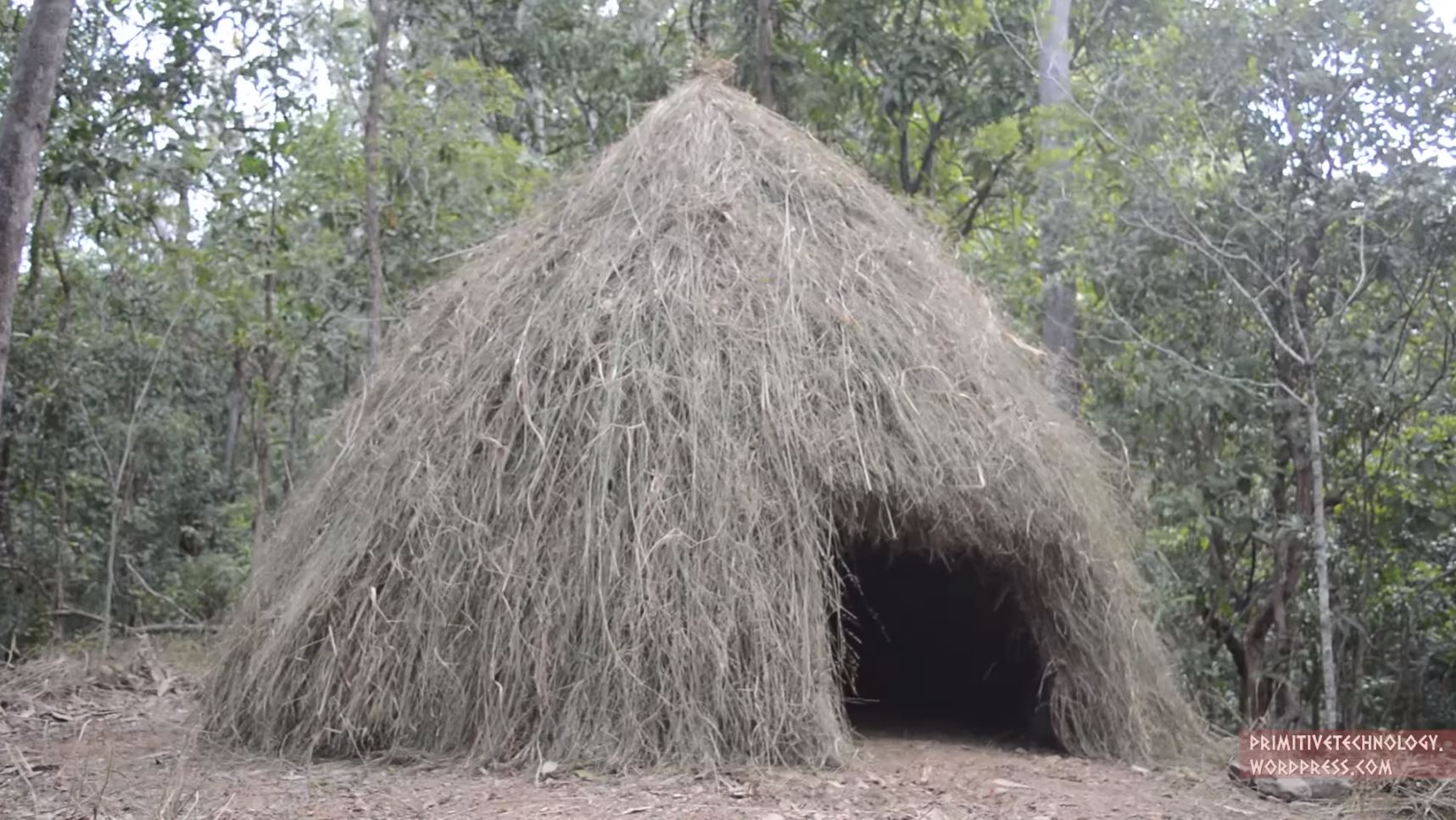 I like Primitive Technology (previously) because his videos are completely free of blather, music and tricky editing. (Here's an interview with the "mysterious bushman.") Read the rest

I've been avidly watching these Primitive Technology videos. The fellow who makes the videos lives in "Far North Queensland, Australia," and so far has made a hut with a kiln-fired tiled roof, underfloor heating and mud pile walls, baskets, a stone hatchet, charcoal, and a sling using only his hands on primitive stone tools. In his latest video, he builds a bow and some arrows.

He stresses that doing these things is a hobby for him, not a way of life. From his FAQ:

Primitive technology is a hobby where you make things in the wild completely from scratch using no modern tools or materials. This is the strict rule. If you want a fire- use fire sticks, an axe- pick up a stone and shape it, a hut- build one from trees, mud, rocks etc. The challenge is seeing how far you can go without modern technology. If this hobby interests you then this blog might be what you are looking for.

Also It should be noted that I don’t live in the wild but just practice this as a hobby. I live in a modern house and eat modern food. I just like to see how people in ancient times built and made things. It is a good hobby that keeps you fit and doesn’t cost anything apart from time and effort.