The Simpsons on Trump's first 100 days in office 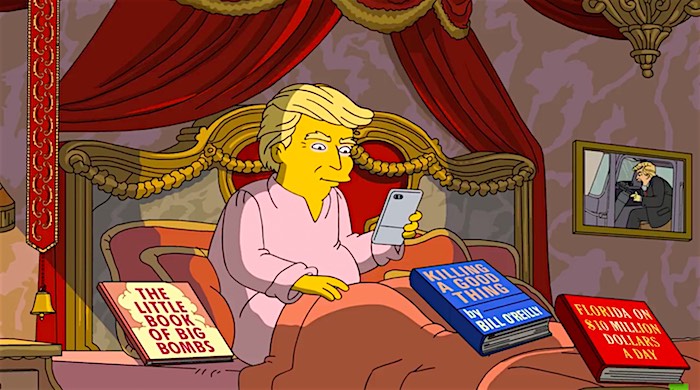 Here is The Simpsons' take on Trump's 100th day in the White House, which includes Sean Spicer hanging himself with a sign that says, "I Quit!" and a strangling match between Jared Kushner and Steve Bannon. We also get to see Trump in his jammies, lying in bed with a remote in his hand. An aide comes to his side and asks him to read a bill that will lower taxes for Republicans. "Can't Fox News read it and I'll watch what they say?" the president asks.

With the 100th day hitting us this Saturday, thank god for comic relief! Read the rest 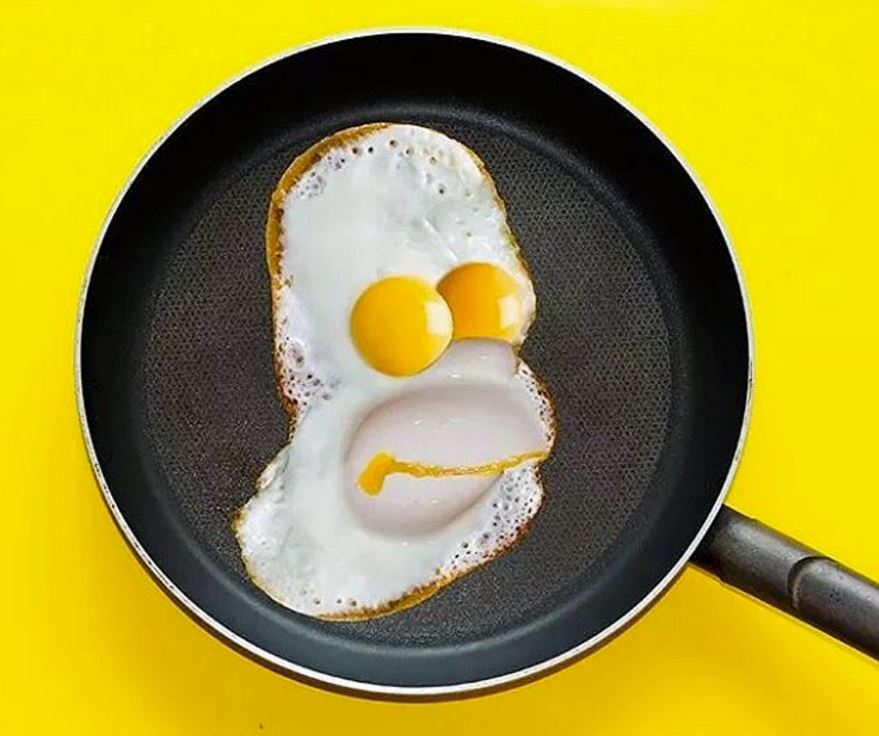 This Simpsons couch gag is a clever Ikea spoof

On last night's episode of The Simpsons, the couch gag was animator Michael Socha's excellent spoof of Ikea's instruction manuals. Read the rest

The Simpsons Sphere: 500 simultaneous episodes in one 360° video

Dude. 500 episodes of The Simpsons, all in one spherical, 360º video space. I'm trippin' so hard. Read the rest

Frinkiac allows you to type in a quote from The Simpsons and it'll find the matching stills from a database of 3 million screen caps. I expect that its creators will be acquihired soon by Compu-Global-Hyper-Mega-Net.

(Thanks, Brad Kreit!) Read the rest

Man with massive Simpsons tattoo on back holds Guinness Record 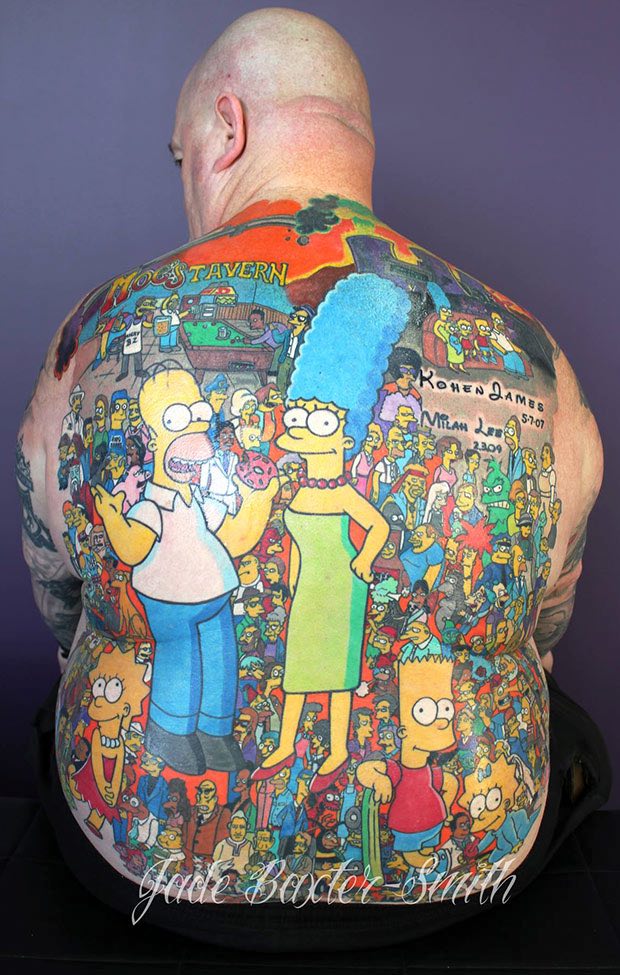 Michael Baxter, 52, holds the Guinness World Record for the "most tattoos of characters from a single animated series." Jade Baxter Smith of Twisted By Design in Victoria, Australia did the ink.

"I wanted to get something which was unique, which nobody else had or would even think of getting...," Baxter says. "I'm a huge fan of the show. I love the tattoo, and I know lots of other people, including my grandchildren, do too.”

Interestingly, the Guinness World Record for "most tattoos of the same cartoon character tattooed on the body" was set by another Simpsons fan, Lee Weir, 27, of New Zealand. He has 41 tattoos of Homer on his arm, seen below.

Watch this absolutely bizarre tribute to The Simpsons

Did you know that Marge Simpson threw up on her honeymoon? Have you ever heard that Homer Simpson almost became a hippie? The Simpsons Family History will test your Simpsons knowledge by exploring 25 years of laughs, stories, and adventures in chronological order. Matt Groening, the creator of The Simpsons, gives us an inside look into how this family became so iconic. This book had me laughing out loud and I can honestly say most books don’t. Stories you didn’t even know existed are revealed and the full backstory of the Simpsons is finally told. It is the perfect book to share with kids and adults because the show has such a universal audience. This book makes me want to go back and watch the series all over again. – Madeline Shapiro

Video: All of The Simpsons couch gags, simultaneously

This is not an artwork by Nam June Paik but rather every couch gag from The Simpsons all at once. Read the rest

A notable 'couch gag' on The Simpsons, in which we travel inside Homer's brain

Here's a clip from a forthcoming episode of The Simpsons, "What To Expect When Bart's Expecting." The couch gag is directed by Michal Socha, and is inspired by "Chick," a short film by Socha which you can view here (or below), and purchase on DVD here. Did you know The Simpsons is the longest-running scripted show in television history? Yep. Read the rest

Above, Bart's "apology" on behalf of The Simpsons writers for referring to Judas Priest as "death metal" in a previous episode which infuriated the group's very vocal fans. From The Guardian:

The original slur came in a storyline where Homer starts illegally downloading music, leading to an anti-piracy investigation from the FBI and an escape to immunity in a Swedish consulate. The FBI counter by hiring the "death metal" Judas Priest to blast a piracy-themed rework of their track Breaking the Law, with the words changed to "Respecting the law: copyright law!"

The Simpsons and Their Mathematical Secrets

The Simpsons is arguably the most successful television show in history. Inevitably, its global appeal and enduring popularity have prompted academics (who tend to overanalyze everything) to identify the subtext of the series and to ask some profound questions. What are the hidden meanings of Homer's utterances about doughnuts and Duff beer? Do the spats between Bart and Lisa symbolize something beyond mere sibling bickering? Are the writers of The Simpsons using the residents of Springfield to explore political or social controversies?

One group of intellectuals authored a text arguing that The Simpsons essentially provides viewers with a weekly philosophy lecture. The Simpsons and Philosophy, edited by William Irwin, Mark T. Conard, and Aeon J. Skoble, claims to identify clear links between variousepisodes and the issues raised by history's great thinkers, includingAristotle, Sartre, and Kant. Chapters include "Marge's Moral Motivation," "The Moral World of the Simpson Family: A Kantian Perspective,"and "Thus Spake Bart: On Nietzsche and the Virtues of BeingBad." Read the rest

While it's probably a long shot, a four-minute Simpsons short is currently included on the list of ten (narrowed down from 56) animated shorts that are eligible for an Oscar this year. Maggie Simpson in "The Longest Daycare" was shown (in 3D) before Ice Age: Continental Drift this past summer and featured a fierce battle between the youngest Simpson and Baby Gerald. Written by James L. Brooks and Matt Groening, The Longest Daycare's possible nod could be sweet, sweet payback for The Simpsons Movie being shut out for Best Animated Feature back in 2008. But, as I said, it might be a long-shot; other nominees include Disney's Paperman (currently being shown before Wreck-It-Ralph), Minkyu Lee's Adam and Dog, PES' Fresh Guacamole, and Raul Garcia's The Fall of the House of Usher, which is narrated by Sir Christopher Lee. The Wrap has the complete list of the ten final contenders, and the nominees will be announced January 10. (via Splitsider) Read the rest