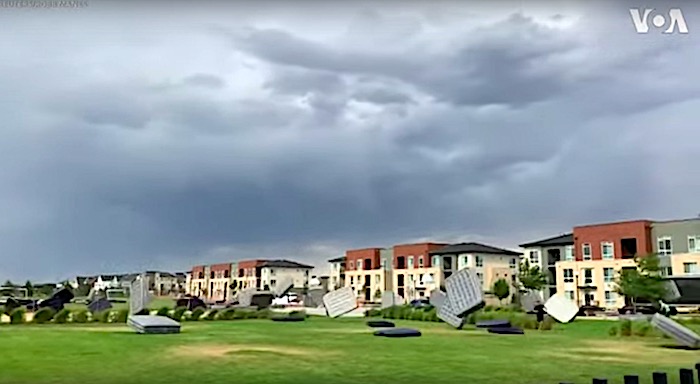 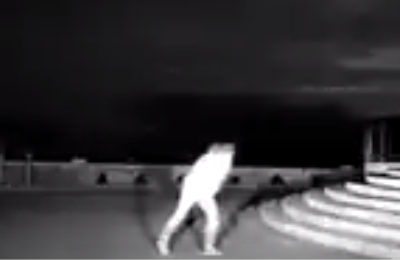 WINDY!! wind gusts at Vista House in the Columbia River Gorge were over 90 MPH at times this morning! Really hard to walk, knocked me down several times #LiveOnK2 #pdxtst #EquinoxLiveDrive pic.twitter.com/dBRcP0VcLq

The curious effect of 457 mph wind on a man's face

"Test conducted in 1946 where a human subject was exposed to blasts of air. The test was performed at (the National Advisory Committee for Aeronautics' Langley Memorial Aeronautical Laboratory, now the) NASA Langley Research Center's 8 ft High Speed Tunnel."

(from the Library of Congress Prelinger Archives, cleaned up by Quickfound)

Winds from approaching Hurricane Sandy turned the Freedom Tower into an æolian harp.

In an explainer for kids that's actually pretty helpful for grown-ups, too, Matt Shipman reminds us that the air around us isn't totally weightless. It weighs something, because molecules all weigh something:

Wind farms aren't a major cause of bird deaths

It's hard to say how many birds are killed by collisions with wind turbines. The high end of the estimates top out around 450,000 birds each year in the United States. But even that doesn't come close to making wind turbines a major killer of American birds. Among the things that kill far, far, far more birds than wind power: Buildings, cars, and house cats. (Thanks, Uncle Bruce!) Read the rest

This is what the wind over the United States looked like on March 27th, 5:00 pm Eastern Daylight Time. It's beautiful. And it's even better if you go to the project page, where you can watch real-time wind currents move around the map.

The National Digital Forecast Database is a weather forecasting system that provides open access to weather data collected all over the United States. The National Weather Service has field centers all across the country, that collect information about things like wind speed/direction, precipitation, and barometric pressure. They combine this data with big-picture satellite tracking and algorithms that are based on what we know about how weather patterns work, and that's how you get the kind of daily forecast we rely on to plan our days.

In the process, the National Weather Service generates a lot of data—data that has not, traditionally, been accessible to just anybody. We saw the forecasts, but it wasn't as easy to see the measurements the forecasts were based on. The NDFD changes that. It's a really great example of publicly funded research being made available to the people who help provide the funding.

And when that happens, you get cool projects like this one, where data on wind direction and speed are used to create truly amazing art. The information on current conditions, and predictions for the future, are updated hourly. When you look at the animated version of this map, what you see is the most recent forecast playing out. Read the rest

Before the Lights Go Out is Maggie's new book about how our current energy systems work, and how we'll have to change them in the future. It comes out April 10th and is available for pre-order now. (E-book pre-orders coming soon!) Over the next couple of months, Maggie will be posting some energy-related stories based on things she learned while researching the book. This is one of them.

Steve_Saus submitterated this video that combines 14 years of weather radar images with a soothing piano concerto. It's a neat thing to watch a couple minutes of (though I'm not sure I needed to sit around for all 33 minutes of the video). It also reminded me of something really interesting that I learned about U.S. weather patterns and alternative energy.

Weather data, like the kind visualized here, can be collected, analyzed, and turned into algorithms that show us, in increasingly granular detail, what we can expect the weather to do in a specific part of the United States. Today, you can even break this information down to show what happens in one small part of a state compared to another small part. And that's important. As we increase our reliance on sources of energy that are based on weather patterns, this kind of information will become crucial to not only predicting how much power we can expect to get from a given wind farm, but also in deciding where to build that wind farm in the first place.

Take Texas as an example, which has the most installed wind power capacity of any U.S. Read the rest

A powerful personal perspective on NIMBY

OnEarth magazine has a really interesting essay on renewable energy and NIMBYism, by nature writer David Gessner. A former resident of Cape Cod, Gessner was a longtime opponent of the plan to site offshore wind turbines in the ocean near the Cape. But he recently changed his mind. Why? It has to do with Henry David Thoreau and the Gulf Oil Spill. Read the rest

Rethinking NIMBY: Why Wind Power Could Lead To New Ways of Defining (and Dealing With) Public Naysaying

True story: A small college in the Midwest wanted to put up a wind turbine on their campus. The school, being on top of a hill in the middle of the prairie, had enough wind to produce upwards of 3/4 of their needed electricity, so the project made good sense. But when it came time to talk to the people living nearby, the school ran into some opposition. In particular, from a farmer who thought the noise and appearance of the wind turbine would lower property values.

The punchline: He was a pig farmer.*

The point here is not that irony is funny. (Although, it totally is.) Instead, this is about the cultural role that farmer represents. NIMBY--Not In My Backyard--is traditionally defined as what happens when people are, generally, in favor of something, but don't want the necessary infrastructure built anywhere they can see it. Bacon is delicious, but you don't want to live next door to a pig farm. Sustainable energy is great, but you don't want a wind turbine mucking up your views.

It's really easy to write off any opposition that gets labeled as NIMBY. After all, infrastructure has to be built somewhere, and everywhere is somebody's backyard. Therefore, NIMBYists are selfish twits who can't see beyond their own nose. But the truth, as per usual, is more complicated. Thanks to wind power projects, and the supposedly NIMBY reactions against them, political and social scientists are learning what we really talk about when we talk about NIMBY. Read the rest