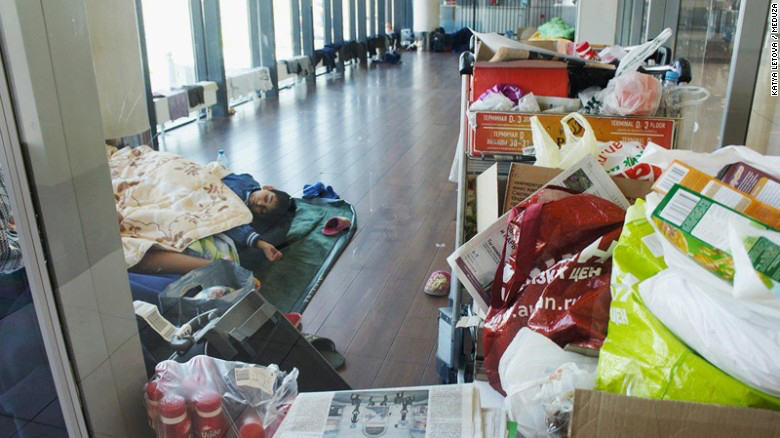 Hassan Abdo Ahmed Mohammed, his wife, and four children escaped the Syrian civil war to settle in Russia. The Kurdish family landed in Moscow's Sheremetyevo Airport but the Russian government says the family's visas are fake. If they return to Syria, they may be killed. So they have been living in the airport for 50 days while lawyers try to sort out their status. UNICEF brings them food and, a week ago, the United Nations and an NGO convinced Russian authorities to permit them to spend their nights in a terminal hotel room. From CNN:

Mohammed thinks Russia's close ties with the embattled Syrian government are interfering with his plans to enter Russia.

"Russia has a very strong relation with the Syrian regime, and they don't want to encourage Syrians to leave the country," he said.

Mohammed's lawyer said the Syrian government checked out their passports and said they were authentic. Russian authorities are now investigating the the passports, the lawyer said, and should come to a decision soon.

Video: "All By Myself" at the airport overnight

Richard Dunn was bumped from a flight out of Las Vegas so he spent the night in the airport, and made this fun iPhone video to kill time. Read the rest

Bimbo Olumuyiwa Oyewole, a security supervisor at Newark airport, lived a double life for 20 years using the identity of the victim in an unsolved murder.

Since 1992, the undocumented Nigerian immigrant worked at EWR as Jerry Thomas, a man who was killed that same year in New York City. Oyewole continued to live as Thomas undetected for two decades, while overseeing security matters at one of America's busiest airports.

According to the Associated Press report, "the private security guards he supervised are responsible for manning TSA security checkpoints after passenger gates close for the evening and before they reopen in the morning. The guards also inspect delivery vehicles for possible unauthorized cargo."

airports / aviation / if you see something say something / security theater / tsa