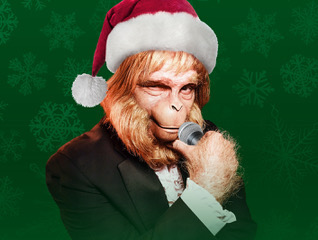 Supporting Swing Left-Los Feliz and Field Team 6, Dana Gould will be hosting a fantastic night of entertainment as the loveable ape Dr. Zaius!

Come see Christmas with a Z!

“CHRISTMAS WITH A Z!”

AN EVENING OF HOLIDAY MUSIC, COMEDY AND COCKTAILS

AT THE SATELLITE IN SILVER LAKE

PRESENTED BY SWING LEFT-LOS FELIZ AND STAND UP 4 AMERICA

Los Angeles: Join Dr. Zaius and Jim Turner as they 'Stand Up for America'

On Thursday, August 8th, in Silverlake, California you have the opportunity to see some amazing performers. The line-up includes Jim Turner, Dana Gould, and legendary guitarist Laurence Juber, all while supporting Swing Left Los Feliz.

I am working with a group putting on a benefit to raise funds to contribute to Dan McCreadys’ special election campaign to fill the seat representing North Carolina’s 9th Congressional District in the U.S. House. The special election, which will be held on September 10, 2019, follows allegations the Republican candidate committed election fraud in the initial election. It’s essential McCready is successful in his congressional bid and Swing Left Los Feliz (our group) aims to provide recourses to help make that happen - so the Democrats can hold the House while working towards flipping the Senate.

And equally important: this particular election will be a referendum on trump and is really the first big election of 2020. It’s very important we win it.

The benefit we’re throwing is Thursday, August 8 at The Satellite (used to be Spaceland in Silverlake) at 8:00. And it’s actually one of those benefits that's worth the price. You don’t even have to like Dan McCready. You’ll be that happy you come. Mainly because the inimitable, Dana Gould, will be emceeing the night in a very rare appearance as Dr. Zaius from Planet of the Apes!

Also appearing will be: