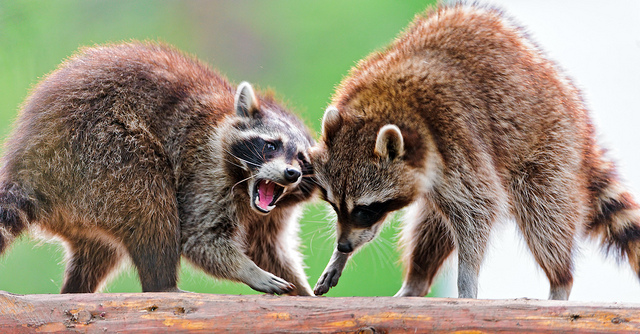 Hydrophobia, hallucinations, agitation and partial paralysis: the symptoms that come from being afflicted with rabies are twelve kinds of terrible. Oh, and death: a painful, writhing death. That's in there, too. Basically, it's one big "nah." So when folks in Milton, West Virginia saw a group of raccoons behaving erratically -- like they might be infected with rabies -- they called the cops right away. When the police cornered the raccoons in question, they quickly realized that the animals weren't rabid at all.

From The Chicago Tribune:

Turns out they appear to be drunk on crab apples," police said in their official statement to the community.

The apprehended animals were held in custody and allowed to sober up in what can only be deemed a raccoon drunk tank.

Then they were released into the wild, but not before some enterprising officer took a picture of the animal, showing it to be dazed, woozy, more than a little out of it. They named one drunk raccoon Dallas and released both near the woods.

And with that, Dallas joined a long line of animals that have made headlines for public intoxication.

According to Australian Geographic, raccoons and humans aren't the only animals that like to tie one on. Wallabies love to chase the dragon, monkeys yoink cocktails from tourists, and reindeer trip balls on magic mushrooms. My absolute favorite fact that Australian Geographic serves up, however, is that caterpillars frigging LOVE cocaine:

The caterpillar larvae of the Eloria noyesi moth, found in Peru and Colombia, feeds exclusively on coca plants, eating as many as 50 leaves each day.