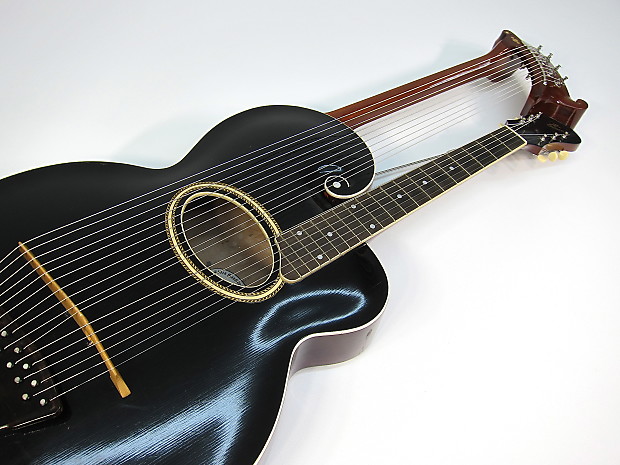 Freakishly clean 1908 Style U harp guitar in near mint all original condition, serial number 8618 batch number 1004 with original hand tooled rear loading leather case. By far the cleanest century old Gibson instruments we've seen. Purchased originally by the school teaching matriarch of a homesteading family from the Southwestern United States to entertain her students. The size was too much to deal with and the instrument sat unmolested at home in her closet, on her dresser until the death of her only son from old age. The caregiver attending to the dying needs of the now elder son claimed she was gifted the guitar before his death and that the conversation went something like this. Dying son says "what about my Moms' guitar? Caregiver says, what guitar? Dying man points to the closet and she sees the case on top of the dresser, that's for you, you take it." She sold it to me a few days’ later, perfect provenance, perfect guitar and perfect deal. It’s slightly difficult to covey how clean and original this instrument is, there will probably not be another of these, this nice ever. Spectacular varnished finish displays perfectly normal varnish shrinkage, patterned in a way only varnish does when not French polished out. A better example cannot be found for sale anywhere. All instruments are examined, cleaned and set up before selling. No modifications or repairs, no cracks or breaks.

Miku was “born,” as Itoh puts it, on August 31, 2007, with the launch of her software. The program would soon become popular, but from the start Miku attracted her own fans, and they began riffing. Crypton set up a site where they could post their creations, and by that first afternoon, according to Itoh, illustrations of her had appeared. Thousands followed. Fan sites proliferated. Creation myths were assembled.