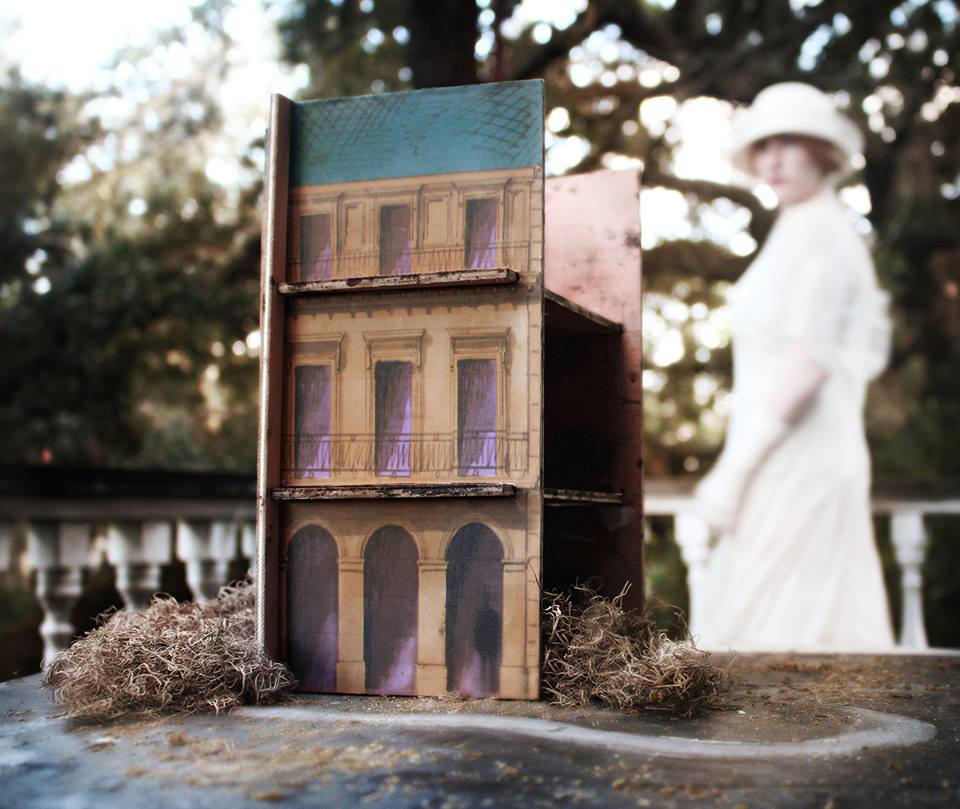 Mysterious things that unfold with multiple mailings are all the rage, but some are infinitely better than others. Personally, I find those that include a murder with a nice spatter of blood to be among the more interesting. If there’s insanity involved, so much the better.

And thus we have The Haunted Dollhouse, a subtle tale of horror which takes place almost a century ago in New Orleans, and which is reliant upon you to do your part: you have to build the house. And there are puzzles to solve, as well, which reveal a narrative of misfortune and murder. What is that enormous bloodstain on the carpet in the parlor?

The pieces come delivered in four packages over the course of a month, each box containing items both small and large. When you’ve put in your time with a straight edge, X-Acto knife, small scissors, and the imaginatively titled “goo,” the end result is a miniature doll house that bears witness to a story of death, madness, and murder which occurred in 1923.

Numerous letters, newspaper articles, postcards, and miniature items (I’m quite fond of the bloody pair of scissors) to decorate said house come within the packages, all of which taken together with the house provide clues to a mystery.

Who killed who? Who’s dead? Who’s alive? Who’s nuts? Your recreation of the crime scene and the many pieces of evidence lead you down a curious path to the truth. When you have gathered sufficient evidence and puzzled it out, an online portfolio is revealed that, like a crystal ball, answers some questions. Read the rest

The lore of haunted television sets

We've posted previously about Electronic Voice Phenomena (EVP), the weird sounds in electronic recordings that some paranormal researchers insist are actually voices of spirits. But I didn't realize that EVP is part of a larger genre of ghostly phenomena called Instrumental Transcommunication "said to occur on devices as varied as television sets, radios, computers, handheld devices such as ipods or iphones, and even fax machines," according to Mysterious Universe. In the 1970s and 1980s, one popular medium for these ghosts in the machine were television sets. (Remember Tobe Hooper's excellent 1982 film Poltergeist?) From Mysterious Universe:

Throughout the 1970s and 80s the ITC phenomenon as it relates to TV really got its roots, becoming quite popular with researchers of the weird, and there were numerous supposed video and audio recordings of these TV bound ghosts at the time. The investigators in these cases claimed that this phenomenon had even been documented with TVs that were turned off or completely unplugged.

One of the pioneers of using televisions to try and pick up signals from the dead was a German ITC researcher named Klaus Schreiber, who used an apparatus that he called the “Vidicomin,” which used a video camera aimed at a TV set that was switched on but not attached to an aerial, and the signal looped the output from the camera back into the TV. This loop was said to produce dramatic results, with various faces apparently blooming out from the white noise on sets, and on one occasion an actress from Austria named Romy Schneider supposedly clearly appeared on a TV in one such session years after her death.