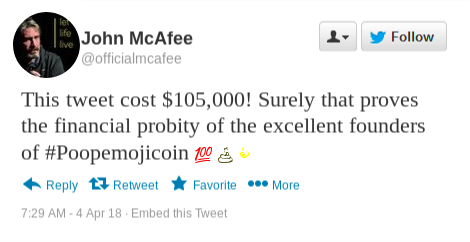 Creepy (no, seriously) 1980s villain John McAfee has 812,000 Twitter followers, some of whom are not bots, and for the low price of $105,000, he will tweet to them about your cryptocurrency. Read the rest

A strange statement published on the vanity site whoismcafee.com:

Based on new information. Mr. McAfee is terminating his relationship with Vice Magazine. Due to information just received, It is no longer clear to Mr. McAfee that the “accidental” release of his co-ordinates due to Vice Magazine’s editorial department’s failure to remove location data from their now notorious photo, was indeed an accident. This incident led directly to Mr. McAfee’s arrest. The reason, possibly, was that Vice wanted exclusive access to Mr. McAfee’s arrest, which they in fact obtained and broadcast. This, and subsequent developments, including a breach of verbal contract, has led Mr. McAfee to terminate all contact with Vice.

Mr. McAfee does not believe that the two reporters travelling with him knew in advance, or in any way aided and abetted Vice’s plan to “out” him.

This blog will continue as normal beginning later this afternoon. Obviously, legal proceedings are under way.

Impact Future Media of Montreal claims to have secured "the exclusive IP rights" to the story of anti-virus pioneer and noted crazy person John McAfee, who was arrested in Guatemala and is wanted in Belize over the apparent murder of his neighbor.

The Hollywood Reporter has more: Read the rest

David told me about Joshua Davis' profile of software millionaire John McAfee, who lives in Belize and is wanted for questioning in a murder there. I paid $0.99 for the article on Amazon and it was $0.99 well spent.

There was always something unusual about John McAfee. The tech entrepreneur made a fortune from the antivirus software that bears his name, but he also spent years as a cocaine addict, spiritual guru and yoga expert. In 2009, after losing millions in the stock market crash, he decided to retire to the tiny Central American nation of Belize. That's when things really got weird. He started hanging out with killers, prostitutes, and pimps. He fell in love with a 17-year-old and surrounded his tropical compound with armed guards. In November 2012 his neighbor was found murdered. McAfee, who professed his innocence, fled the police and went into hiding.

WIRED's Joshua Davis had months of exclusive access to McAfee before his disappearance and was virtually the only journalist McAfee had contact with when he went on the lam. In this fascinating profile, Davis takes readers into McAfee's heart of darkness, a harrowing and jaw-dropping tale of ambition, paranoia, sex, and madness.

McAfee's blog is good reading, too:

After two days we returned to the house, in disguise, and I began my watch.

The first day I colored my full beard and my hair light grey- almost white. I darkened the skin of my face, neck and hands carefully with shoe polish and put on an LA Saints baseball cap with the brim facing backwards and tufts of the front of my hair sticking out unkempt through the band.