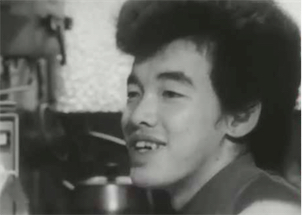 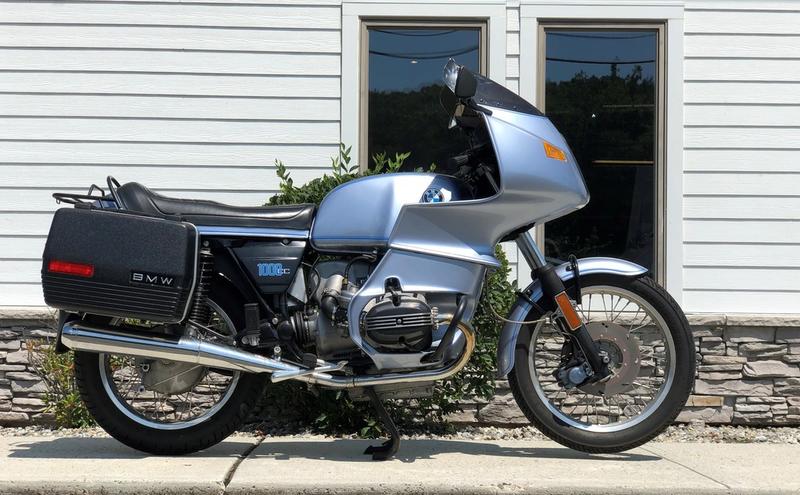 It will totally crack me up when we see this bike purchased and then hacked into some unfaired thug cafe racer with knobby tires and a high pipe. Read the rest

You will find cleaning a motorcycle's carbs a lot easier if you have brushes and wires that'll fit through the jets. This set works for me!

My motorcycle famously has a finicky pair of Dell'orto pumper carbs. They make the bike go really, really fast... when they work right. Today's formulations of California gas really seem to gum things up if left to sit and sit it did. I was barely able to run my bike from November til yesterday.

My bike was doing something really obvious, after starting the left side float would stick in the up position and gasoline would start to pour out the overflow hole. Most BMW's have Bing carburetors which respond very well to a light tap on the side to free the float. The Dell's do not give a shit. I shut off the fuel and removed the bowl only to find the float stuck. I could pull it down but clearly, the plastic float was binding on its 'knurled' pivot pin.

Those 'knurled' float pins have been my bane. In my set of carbs they just don't want to come out for me. If I take the carb off the bike I can get them out and replace the floats, but if I want to keep them on the bike, it is a real thing.

I decided to try blasting the area out with carb cleaner and offering a prayer to whichever Greek God managed fuel systems delivery in their pantheon. The float now swings free. Read the rest 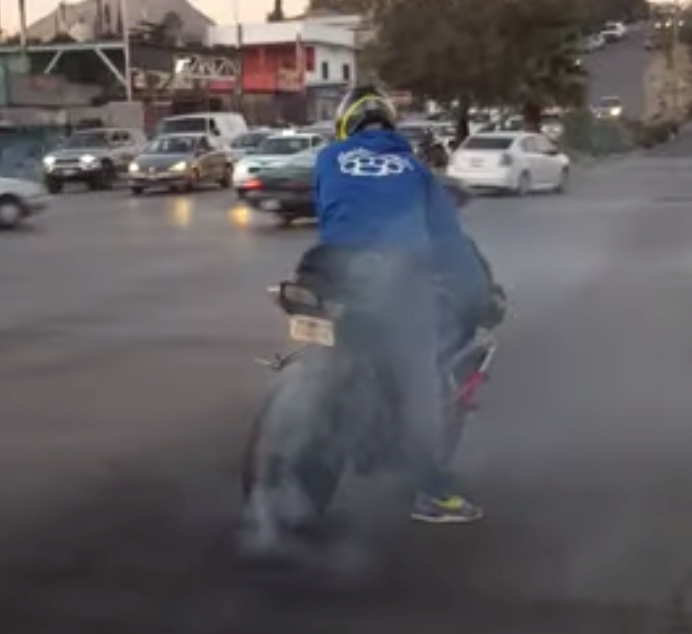 The Hells Angels have left the building 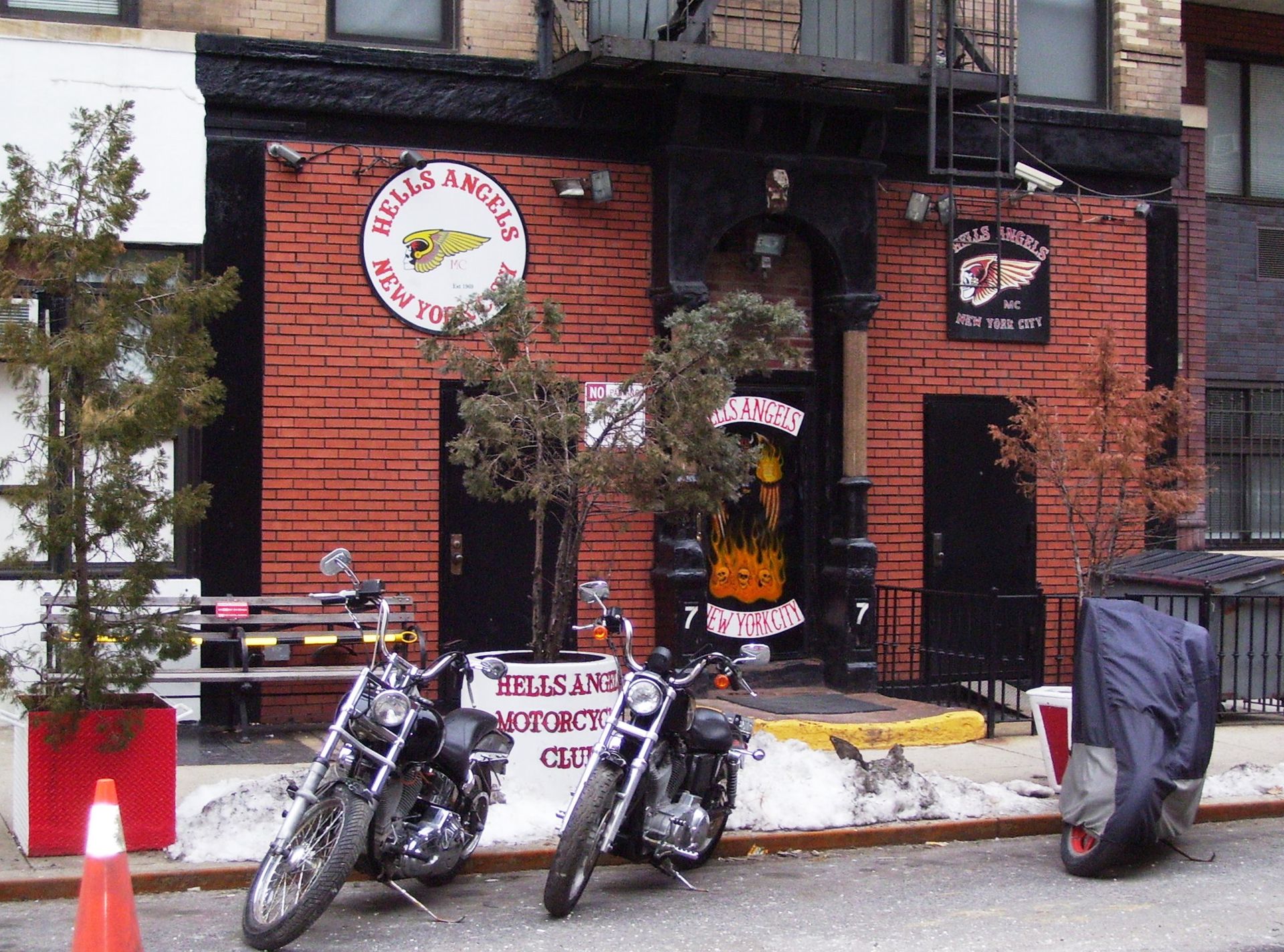 Since 1968, 77 East Third Street in Manhattan's East Village housed the Hells Angels Motorcycle Club's New York City clubhouse (and apartments for some of its members). But the building was recently sold and the Angels have purchased new digs, a former church on Long Island. The New Yorker's Sarah Larson stopped by on moving day:

“The parties used to be great,” (neighbor) Nancy said. “Until the explosion.” In 1990, a garbage-can firecracker killed a fourteen-year-old boy. Over the years, the East Village Angels both caused and prevented mayhem. In 1994, the Times characterized this mayhem, part “lore and part police reports,” as “countless decibel-cranking parties, LSD-laced misadventures, drug deals, orgies and random acts of violence against passers-by.” In recent years, parking-space tussles resulted in beatings and a shooting; a woman who pounded on the door, screaming, was badly beaten. In 1978, the chapter president, Vincent (Big Vinny) Girolamo, of plaque fame, allegedly pushed his girlfriend off the roof, to her death. (He died, of stab wounds, before he could stand trial.) Innumerable bad vibes were doled out after unwanted bench-sitting, dog-peeing, and photography incidents. But, from the scuzz era to the N.Y.U.-and-condos era, club members also defended their neighbors; the Angels’ block was considered the safest around.

Delicious piece by @asarahlarson on the departure of the Hells Angels from my block https://t.co/oCuYPAMyHf 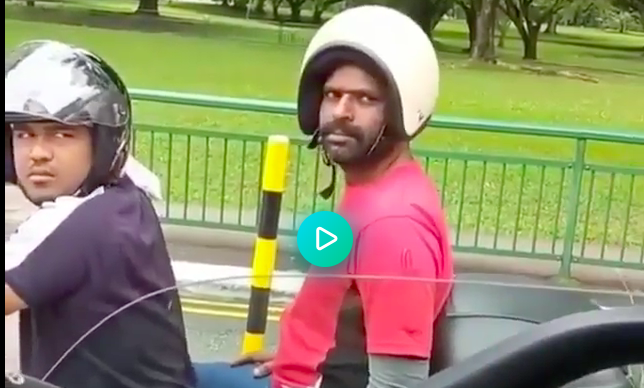 At insane speeds, Moto2 racer pulls other rider's brake and gets banned 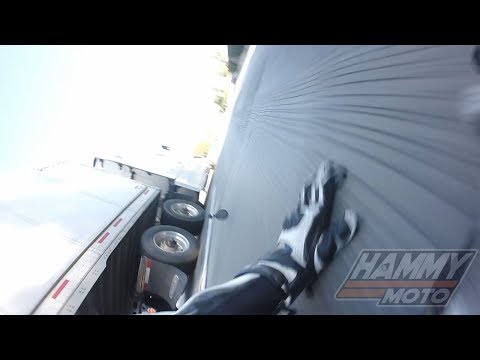 How to motorcycle safely, mid-70s version 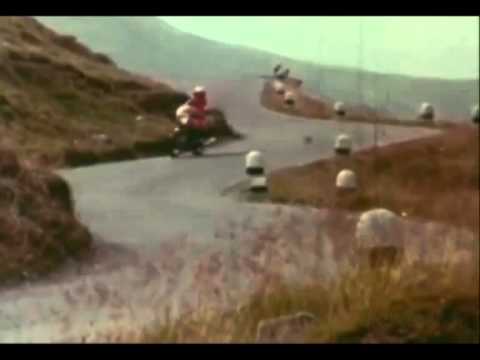 Nothing says MOTORCYCLE SAFETY like the Rockford files theme and a British accent. Read the rest 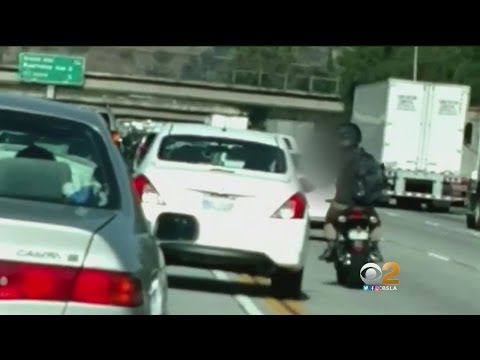 A driver on California's 210 freeway attempted to block and scare motorcyclists out of lanesplitting. Read the rest

Motorcyclists are 27x more likely to die and 5x more likely to be injured than folks in passenger cars. RideApart discusses the dangers of motorcycling in a mature and upfront fashion. Read the rest 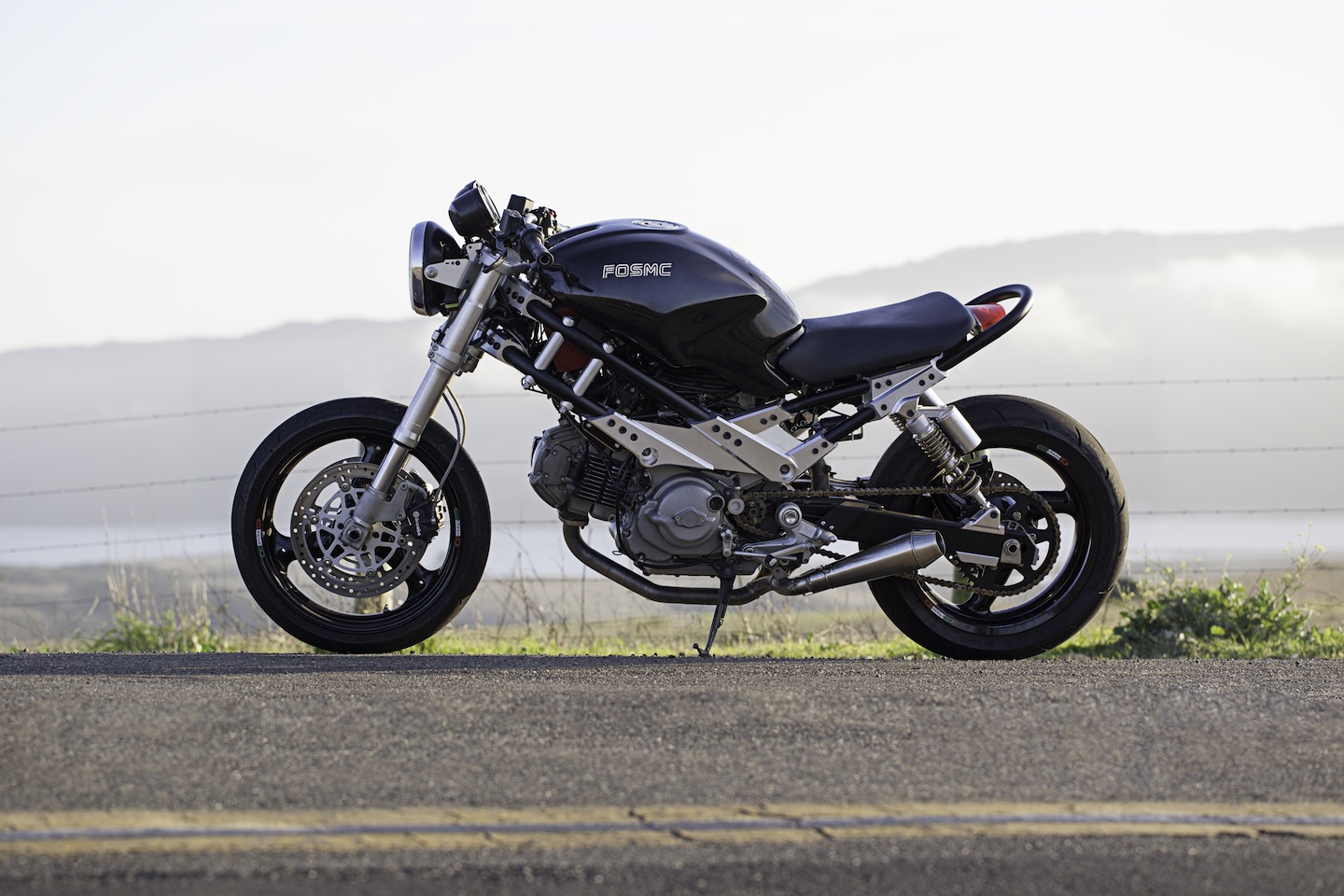 Fictiv is a rapid prototyping company that can take concepts or finished designs and farm them out to a network of CNC and 3D printing companies to have your design fabricated, finished and delivered within 24 hours; to demonstrate their new open IoT platform, they've announced an open-source hardware IoT motorcycle kit that you're meant to be able to assemble in your garage in a weekend, and drive off on by Monday. Read the rest

Accurate map of world's most famous racetracks and motorsport courses

If you've ever played a car racing video game, some of these shapes may be familiar, but Matt Dunlop built on the work of several others to create this fascinating map of the world's famous motorsport courses. Read the rest 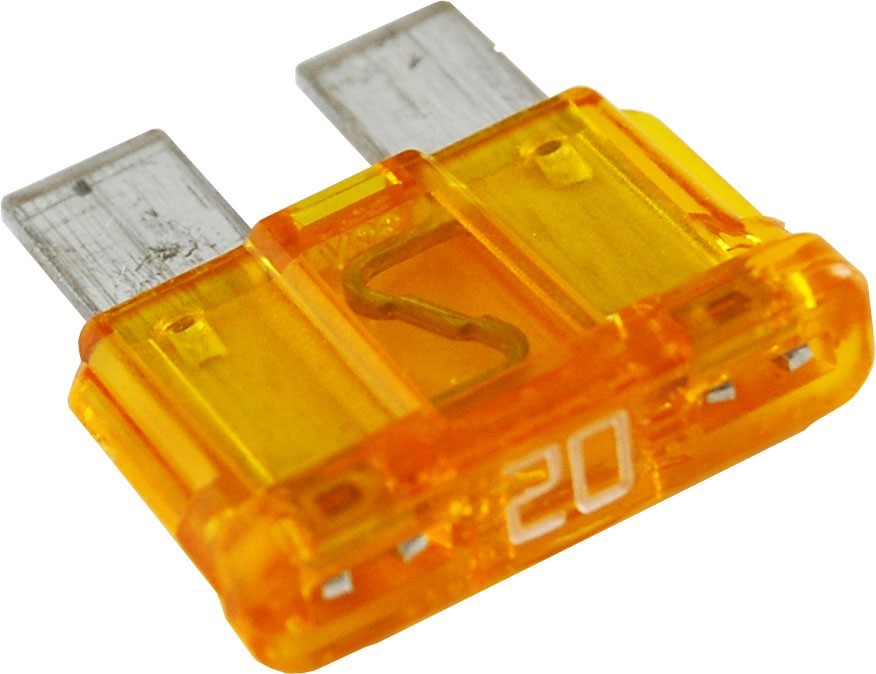 Saturday was a tale of one man, one Triumph Scrambler, one multi-tester, and one hidden in-line 7.5a blade fuse. Luckily, after hours of where curiosity turned to frustration and then anguish, the moral of our story is that blade fuses are cheap.

Quick-connect dongles for battery charging systems are fused, I knew but didn't think of that. Sometimes those fuses get tucked behind things and you don't realize they are there. Should that coincide with you deciding your battery must be charged... always check the battery first.

Luckily, big boxes of assorted fuses are cheap and easy to have on hand. They do not give you lost time back, however. 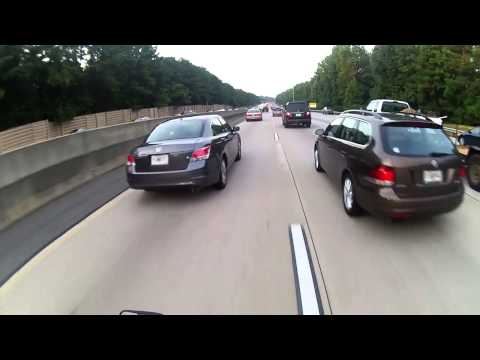 While not previously against the law, lane splitting was left up to officer discretion. Now it is state law that the lane splitting is legal. Officers will use their judgement to determine what is safe behavior and what is not.

Gov. Jerry Brown has signed legislation by Assemblyman Bill Quirk (D-Hayward) that defines the practice and authorizes the California Highway Patrol to establish rules for motorcyclists on how to do it safely.

"This is a huge win for roadway safety,” Lackey said in a statement. "We are now giving riders and motorists clear guidance on when it is safe."

Lane splitting, in which a motorcyclist passes other vehicles by riding between them along the lane line, has long been a controversial issue.

Technically, it has not been legal or illegal, falling in a gray area where it was treated as acceptable by law enforcement agencies. But when the CHP published guidelines on the practice in 2015, a citizen complained that the agency should not be allowed to create public policy. In came AB 51.

Quirk's original bill proposed that lane splitting could occur legally only when a motorcycle was moving no more than 15 mph faster than the traffic around it, and it prohibited the practice at speeds above 50 mph.

Several motorcyclists' groups objected to that, saying the limit was too low. Other groups and individuals, who believe that lane splitting is dangerous regardless of speed, objected to the proposal entirely.

Airbus designed and 3D printed a motorbike inspired by a skeleton 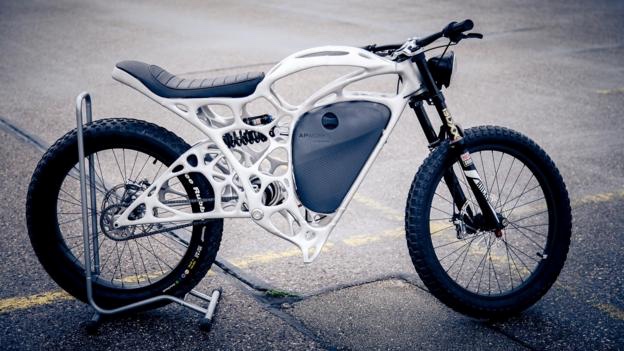 Aerospace corporation Airbus's Light Rider concept motorbike looks a bit like something HR Giger would draw (although his, of course, would be much cooler). In reality, the 3D-printed frame was inspired by skeletal structures that enable its bare-metal frame to weigh just 13 pounds but support a 220 pound rider. From the BBC News:

To design the bike's frame and swingarm rear section, (Airbus's) APWorks team collaborated with Altair Engineering, a US-based consulting company whose structural-design software works through the principle of "morphogenesis" — which in biology refers to process of environmental forces defining a natural organism's form and structure. Morphorgenetic software is written to create forms that achieve maximum strength with minimal mass, and Altair's system has contributed to the designs of such boundary-pushing machines as the Boeing 787 Dreamliner, the Volvo Ocean 70 racing yacht, and the jet-powered Bloodhound SSC, which next year will attempt to break the land speed record...

The 3D-printing process employed to produce the Light Rider's frame is a marvel unto itself. The system uses a laser to melt powdered aluminium alloy in thousands of layers, each only 60 microns thick — about the width of a human hair. Airbus Group Innovations, the company’s research arm, developed the frame's aircraft-grade alloy, called Scalmalloy, which it claims matches the specific strength of titanium. The fabrication process — and the strength of the material — allows the morphogenetic software to specify finer and thinner structures than traditional tooling or moulding methods of manufacturing can produce. In fact, notes Gruenewald, the Light Rider’s frame even features hollow branches that hide cables and other components.