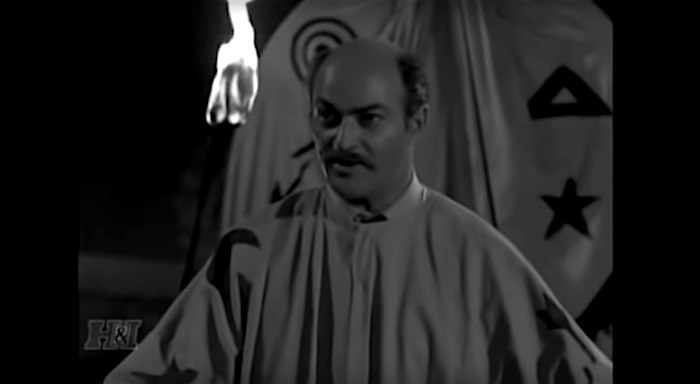 On May 8, 1958, art imitated life in 2018. In an episode of a TV show called Trackdown, there was a conman named Trump, who tried to scare the bejeezus out of a town by preaching, "at midnight tonight, without my help and knowledge, every one of you will be dead.” The only way he could save them is by building a wall.

One sane man tries to talk some sense into the sheriff, with Trump in their presence. "How long are you going to put up with this?" he asks. But the brainwashed sheriff replies with a dumb, "What do you mean?"

How long are you going to let this conman walk around town?" the man persists.

Then Trump speaks his signature line: "Be careful son, I can sue you."

I Googled Trackdown and yes, this show was real. Also from Snopes, "A representative for MeTV, a Chicago network that airs reruns of Trackdown, confirmed that the episode was real." Hopefully the title of the episode, "The End of the World," isn't as prophetic.

Here is the full episode:

Via The Wrap Read the rest

doppelgängers / parallel universes / the end of the world