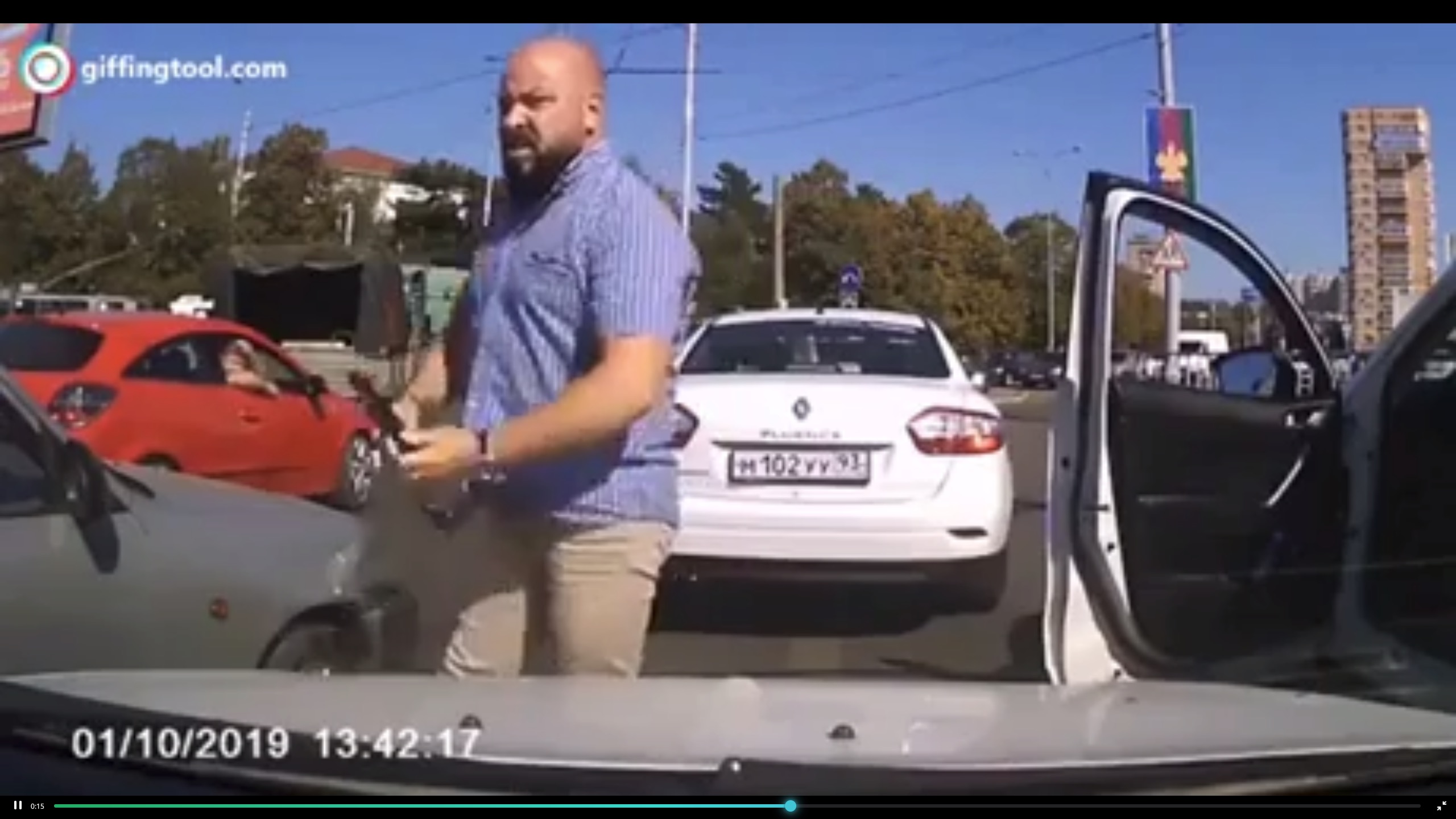 In this video an angry driver cuts off another car. He gets out of his car with a whip in hand. (Who keeps a whip in their car?) He walks over to the driver side of the other car, which is not in the camera's field of vision, so we are unable to see what happens. But a few seconds later the whip-bearing gentleman sheepishly walks back to his car with his face covered in an orange substance.

Applying Occam's Razor to the incident, it's clear that the other driver offered the road rager a bag of Cheetos, which he devoured on the spot. The snack pacified him, and he returned to his vehicle calmed and sated.

[via r/dashcamgifs] Read the rest 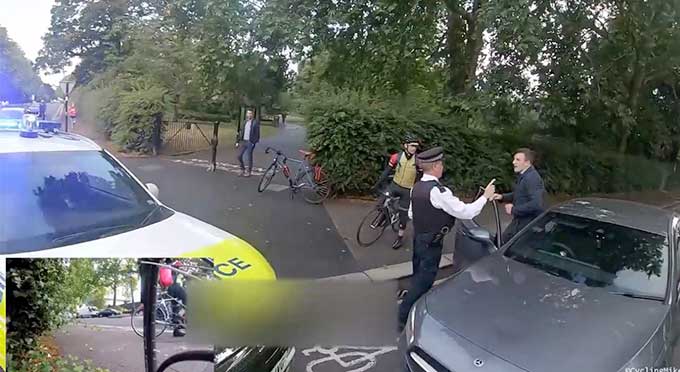 London bobbies were quick to arrive on the scene after a Mercedes driver tried to drive down the wrong side of a street, endangering a cyclist. When the cyclist told the driver to back up and drive on the correct side of the street, the driver took umbrage and bumped the cyclist. Other than the driver, who was incandescent, everyone else in the video kept a stiff upper lip, enforcing a stereotype of British people. The cyclist also demonstrates a good working knowledge of the NATO phonetic alphabet when he recites the license plate number of the vehicle. Here's the video without the perpetrator's face fuzzed out.

Driver goes berserk when another driver won't let him merge 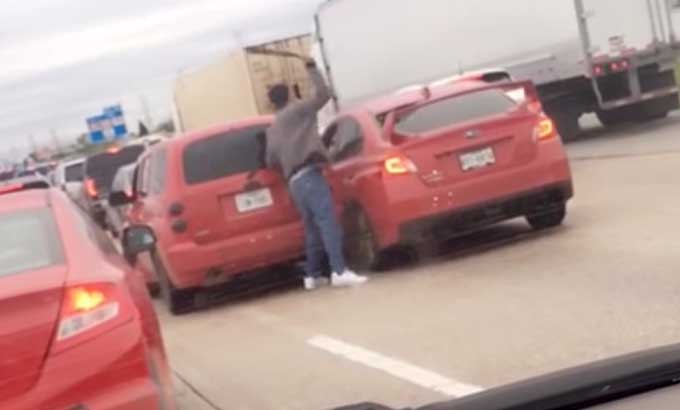 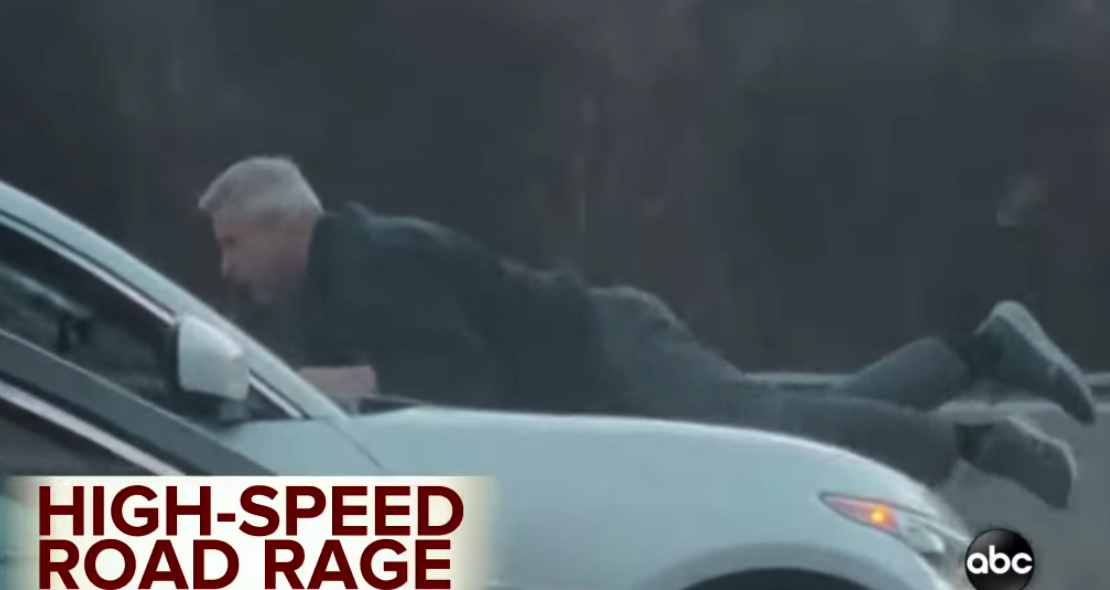 In this spectacular example of road rage, a Massachusetts senior clings to the hood of a vehicle as it accelerates to 70 MPH on the state turnpike.

The man, Richard Kamrowski, and the driver of the SUV, 37-year-old Mark Fitzgerald, were involved in a minor sideswipe on Saturday and had pulled over to exchange information, Fox News reported. When the men got into an argument, Fitzgerald began to drive away. That’s when Kamrowski jumped on the hood of Fitzgerald’s SUV.

Both driver and "passenger" were arrested and charged with being completely bonkers.

BONUS ROAD RAGE VIDEO: In Anaheim, Calif., this weekend, a gentleman leapt onto the hood of a woman's car and punched her windshield with such force it cracked. He got arrested too. Read the rest 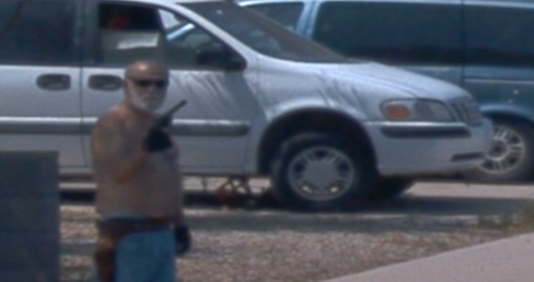 People like this guy waving his gun at a driverless Waymo van in Arizona are attacking self-driving vehicles with rocks, knives, and *their own cars*, sending a message to tech companies like Waymo, which is owned by Alphabet (Google's parent company). That message is, please go experiment with artificial intelligence in somebody else’s neighborhood. Read the rest 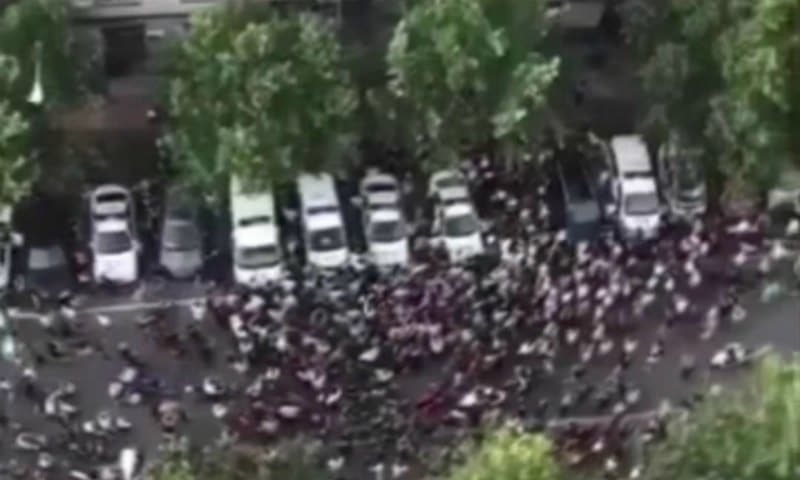 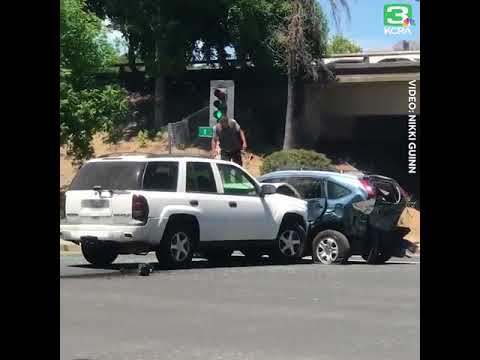 A gentleman turned his SUV into a battering ram, repeatedly bashing another car. Eventually exiting his vehicle to climb atop the target of his anger, the rage filled driver slips and is apprehended.

"The initial call was that someone was behind a driver and upset for some reason after a disturbance on the freeway," said Sgt. Vance Chandler with the Sacramento Police Department.

The suspect ended up on 5th and X streets, where police say he rammed the car he was allegedly following on Business 80. From there, officers say the suspect became fixated on the Honda CR-V.

"This person was in a crisis, obviously," Chandler said.

Police stood back, waiting for the clearly agitated suspect to calm down.

"They were unable to get him to cooperate or speak to them," Chandler added.

The video shows the suspect eventually falling from the top of the CR-V, and officers quickly moving in to detain him.

Officers say they're waiting for the suspect to be medically cleared from the hospital before he's booked into the Sacramento County Jail on charges of vandalism and felony assault. 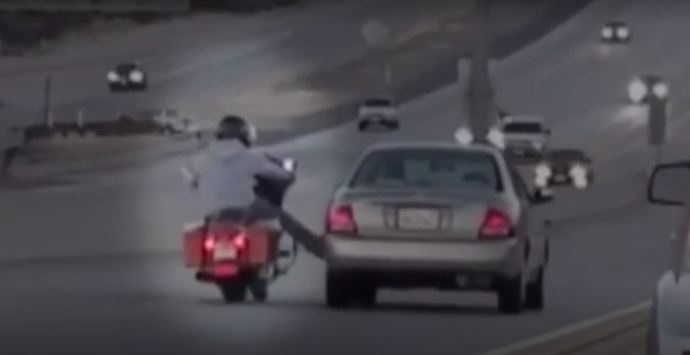 A motorist was left with a "gash to the head" after crashing on a California highway, reports the BBC. In the video, posted courtesy of Chris Traber, a motorcyclist veers close to a car and kicks it. The car then swerves, though it's not clear if the driver was retaliating or panicking. Then the car strikes the center divide and all hell breaks loose. 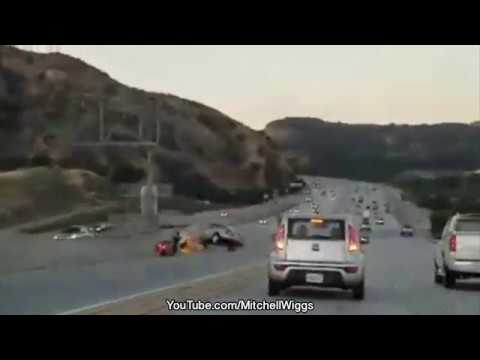 Holy cow! How did the motorcycle stay up?! Read the rest

On June 10 in Santa Monica, California, a motorist exited his Toyota pickup to discuss his overwhelming dissatisfaction with a local cyclist. A series of mishaps ensued. Read the rest 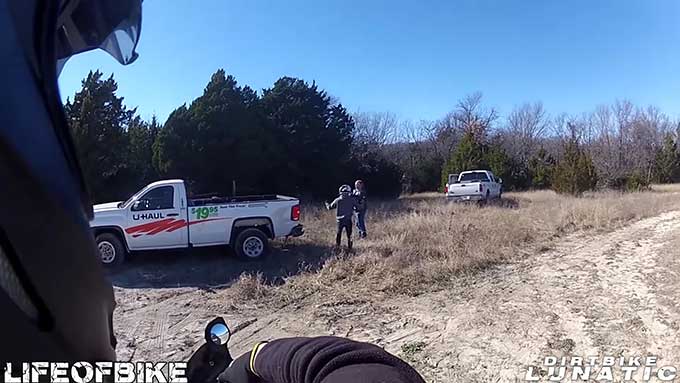 This is like watching a cheap 1980s horror stalker movie, where the villain is an old guy with a magically teleporting pickup truck who is hell-bent on entrapping a couple of dirt bikers in his trans-dimensional prison. Read the rest

This video could be titled "Road Warrior Lite." Read the rest

BMW driver gets angry when car in front lets school bus turn in, then rams the bus 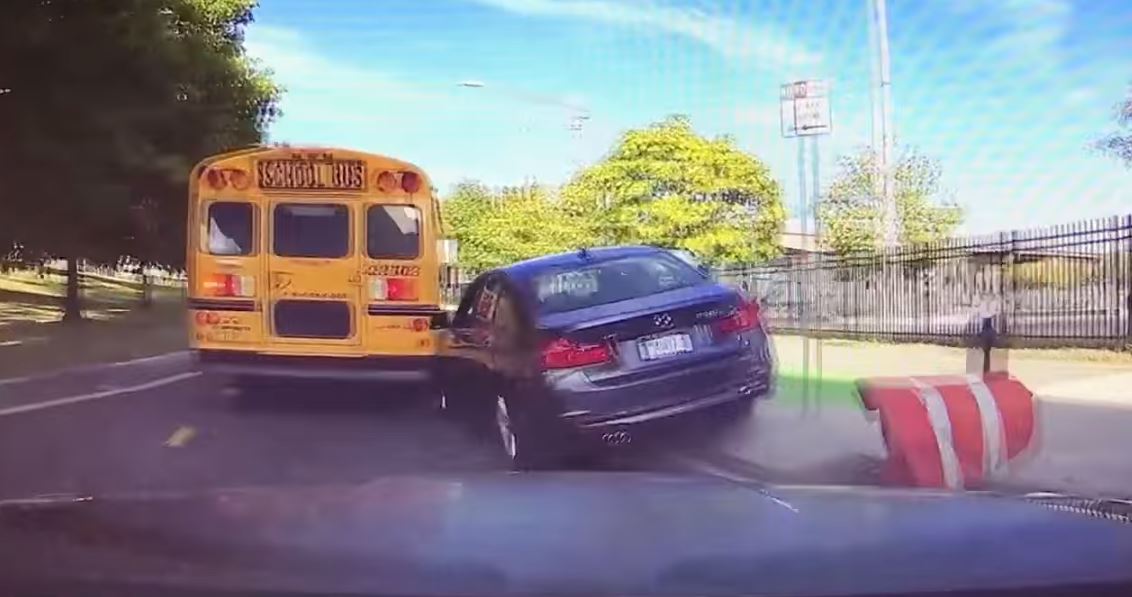 Sadly for him, the car he honked at, screamed at, then angrily overtook had front and rear dashcams rolling. No-one gets hurt, but he's likely to lose his license for hitting the school bus. Read the rest

Man has best day ever 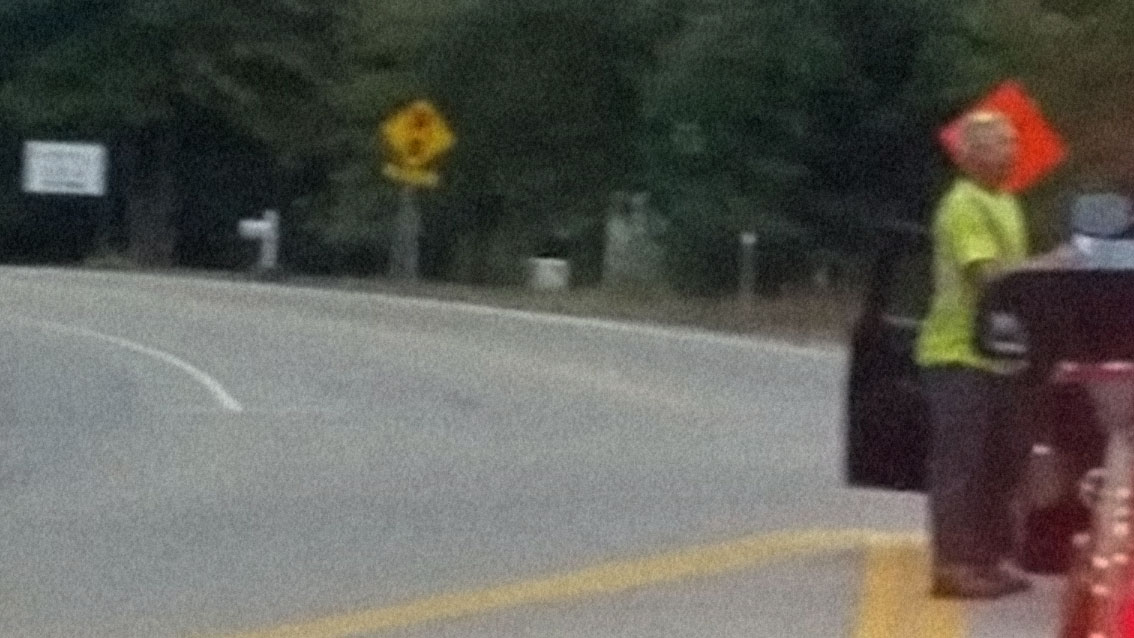 "My husband freaking out over a potential road rage fight," writes Em Spiers. Read the rest

Upset at being honked at Cop declares horn use "road rage" 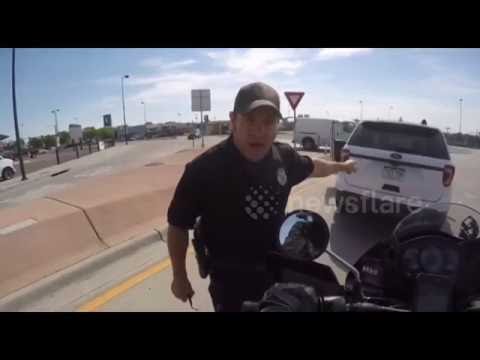 I am impressed with this motorcyclist's ability to remain calm, and attempt to reason with this angry police officer!

A motorcyclist was frustrated by having to wait behind a non-moving car at a round-about, so he honked! The driver of the car turned out to be a police officer who claimed his texting-while-driving was in the name of public safety. The cop then proceeded to educate the motorcyclist, evidently honking is "road rage."

Anyone here from Colorado, where the video took place? Is using a horn illegal in Denver? Read the rest

Oops! Biker honks at driver on cell phone, turns out to be bully cop 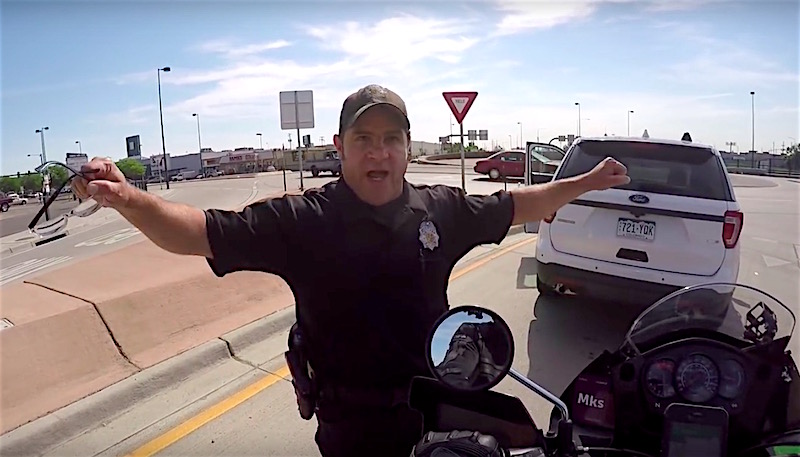 Think twice before you honk! Here's a video of a motorcyclist who honks at an unmarked SUV that turns out to be a cop car. The cop is stopped at a yield sign, talking on his cell phone. The biker stuck behind him gives a quick honk, but when the SUV doesn't budge, he honks a bit longer. Nothing too rude, but the cop in the car doesn't take kindly to it. Read the rest