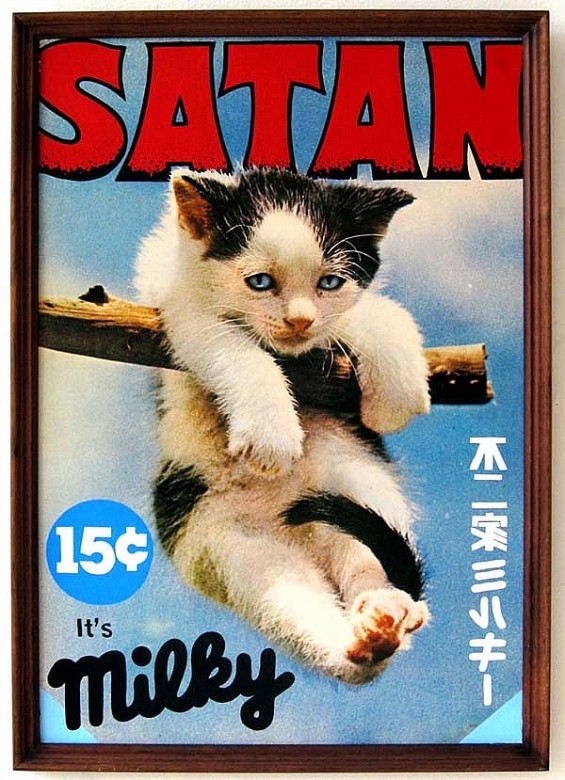 Police in Opp, Alabama, blame Satan for a recent spate of killings in the rural area. The Associated Press quotes a statement posted to the department's facebook page:

THIS PAST SUNDAY, A YOUNG MAN WAS SHOT AND KILLED IN KINSTON. MONDAY NIGHT, A MOTHER WAS SHOT AND KILLED IN NORTHERN COVINGTON COUNTY. THERE HAVE BEEN FIVE MURDERS IN COVINGTON COUNTY IN 2018. THESE MURDERS HAVE BEEN DONE BY OUR YOUNG PEOPLE. THIS IS HAPPENING BECAUSE WE HAVE TURNED AWAY FROM GOD AND EMBRACED SATAN. WE MAY HAVE NOT MEANT TO DO SO BUT, WE HAVE. IT IS TIME TO ASK FOR GOD’S HELP TO STOP THIS. IT IS TIME TO BE PARENTS AND RAISE OUR CHILDREN, NOT HAVE THEM RAISE US. IT IS TIME TO FULLY SUPPORT LAW ENFORCEMENT AND STAND BY THE OFFICERS AND DEPUTIES THAT ARE FAR TOO OFTEN HAVING TO WALK INTO THESE DANGEROUS SITUATIONS AND CLEAN UP THE MESS. FRIENDS, IT IS TIME TO STAND UP AND BE RESPONSIBLE, GROWN UP LEADERS IN OUR COMMUNITY. BOTTOM LINE, THERE ARE SHEEP; THERE ARE WOLVES AND THERE ARE SHEEP DOGS. WHICH GROUP DO YOU BELONG TO ?

Wolves, sheepdogs and the separation of church and state. Read the rest 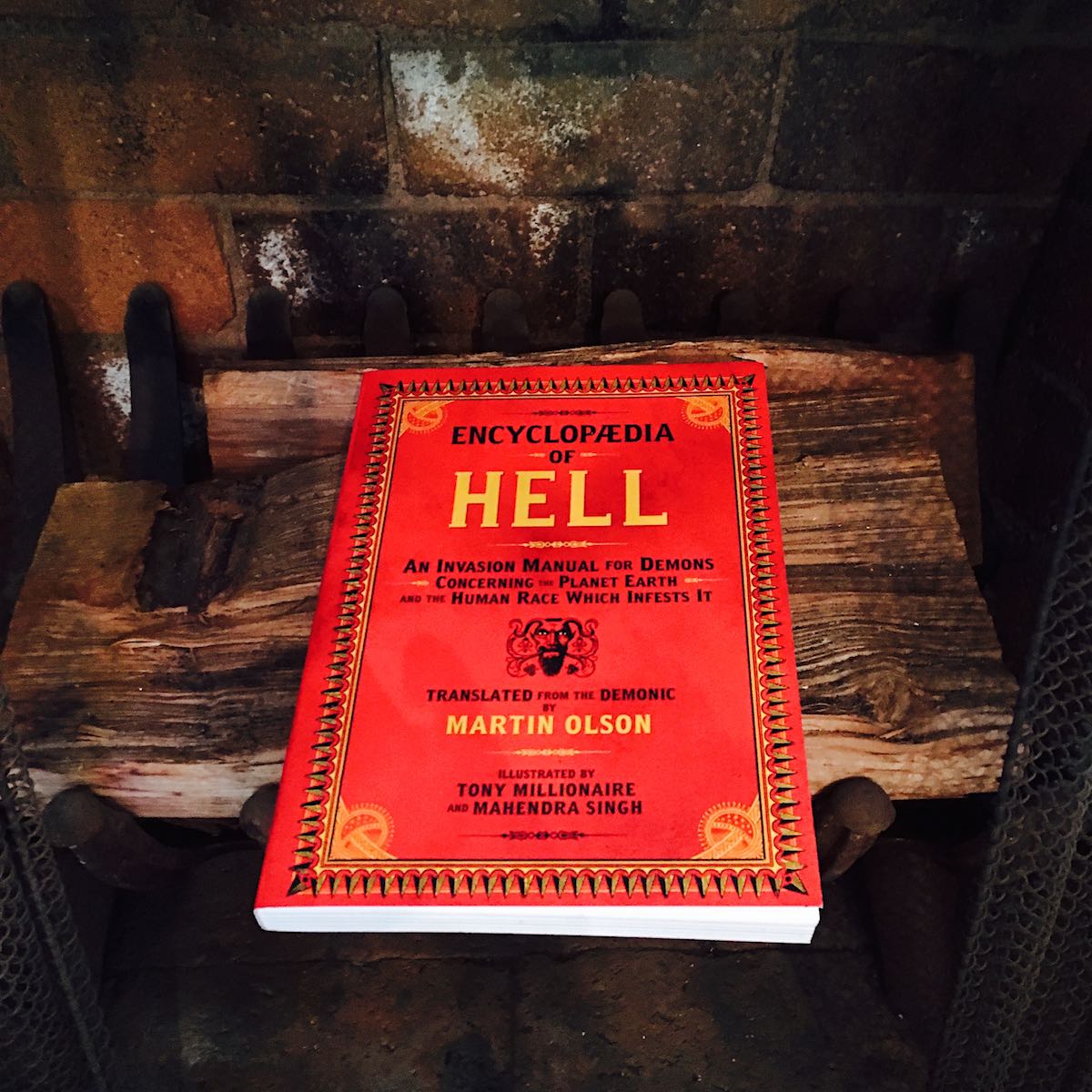 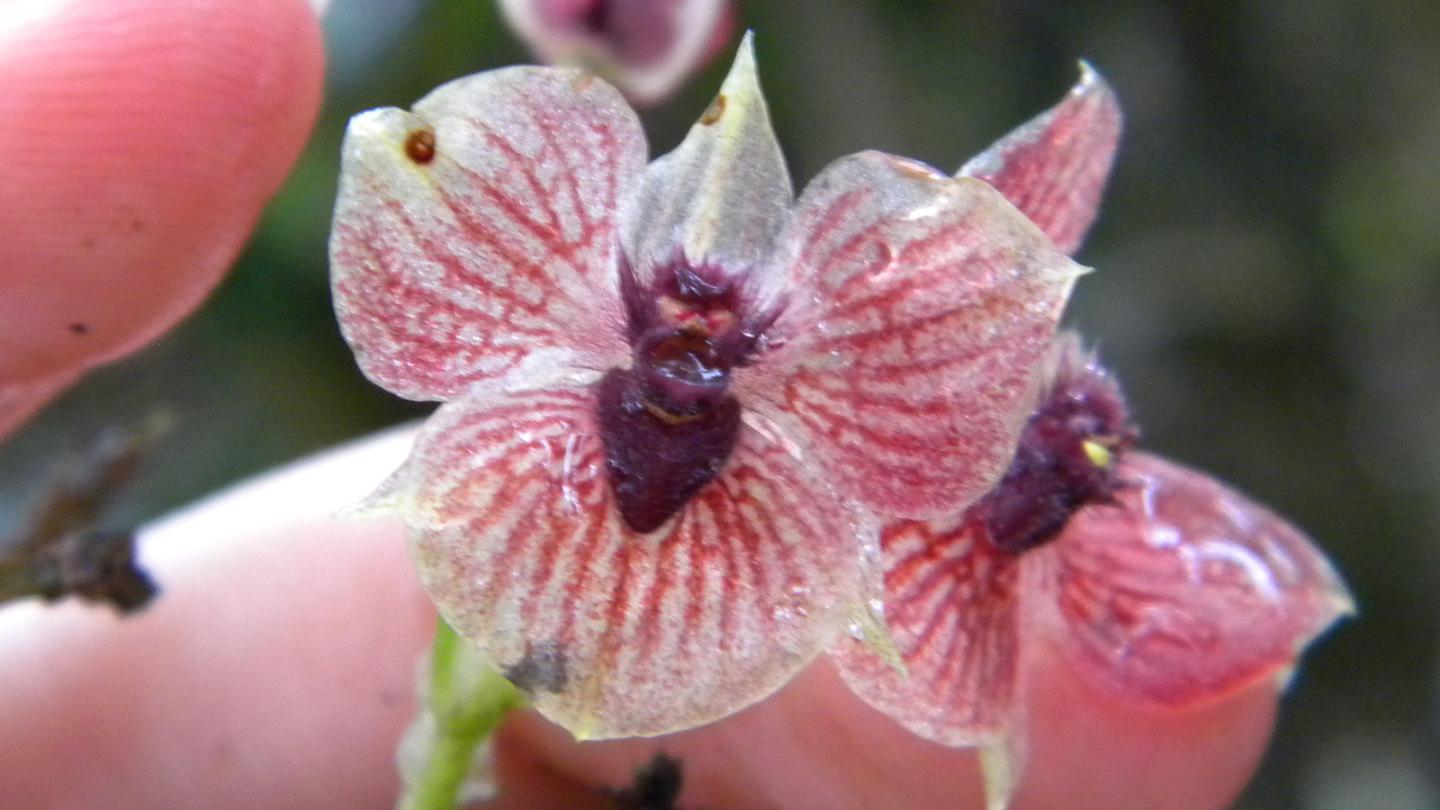 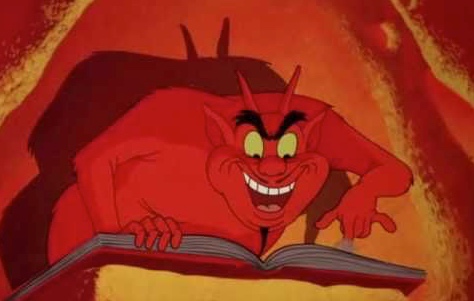 Weird Universe alerts us to the curious case of Gerald Mayo, who in 1971 filed a class action lawsuit in the Western District of Pennsylvania against Satan "and his staff." Read the rest 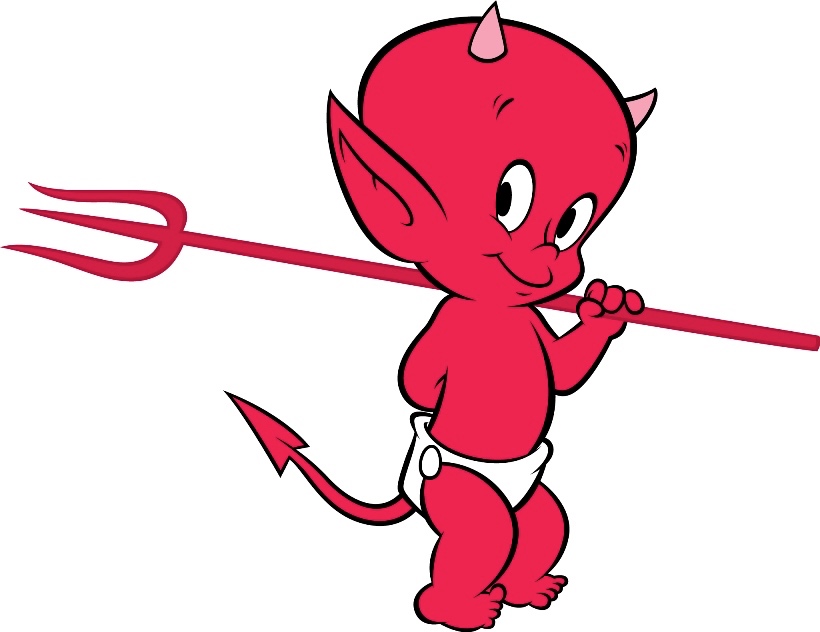 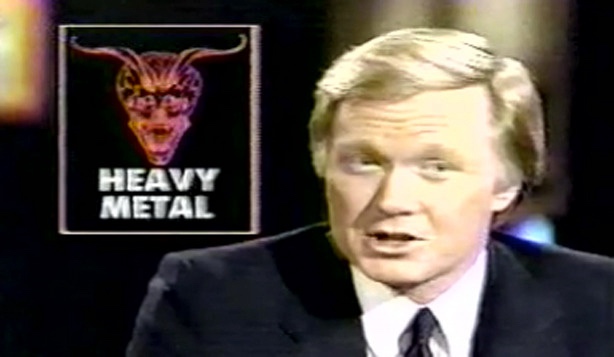 When I was ten, my friend and I got excited by the rumor that if you play Queen's "Another One Bites the Dust" backwards, it says "Smoke marijuana." We tried it and it sounded clear as day! Then we played it for my dad who laughed and said that to him, it sounded like "Go to California." Of course, this was during the heyday of fantastic urban legends about the occult and backmasking in rock music. Evangelist Michael Mills fueled the insanity with this 1981 radio broadcast, featuring bits by Black Sabbath, The Beatles, Led Zeppelin, Judas Priest who famously went to trial (and won) over bullshit accusations of backmasking.

Josie and the Pussycats meet Satan in 1973

Issue #72 of Josie and the Pussycats, published in October of 1973 ran a story in which bikini-wearing Josie becomes possessed by Satan, and has to be exorcised by her bikini-wearing bandmates.

Dangerous Minds has the complete story on its site, along with a synopsis:

In the weirdness that is issue #72, The Pussycats (along with mean-o-nasty non-Pussycat member, Alexandra) ditch their guitars and amps, and head off to pay their respects to Alexandra’s recently departed grandfather at the local mausoleum. For some reason Josie wanders off to some bizarre lower chamber of the mausoleum and is enveloped by an “invisible malignant presence.” After that, Josie goes on a punk-rock style rampage smashing stuff up. When Josie has a psychotic reaction after coming in contact with a copy of the Bible that the clean-cut gang just happened to have lying around, things get really fucking weird (if they weren’t weird enough already).

The art is by Stan Goldberg, one of the better Dan DeCarlo imitators. 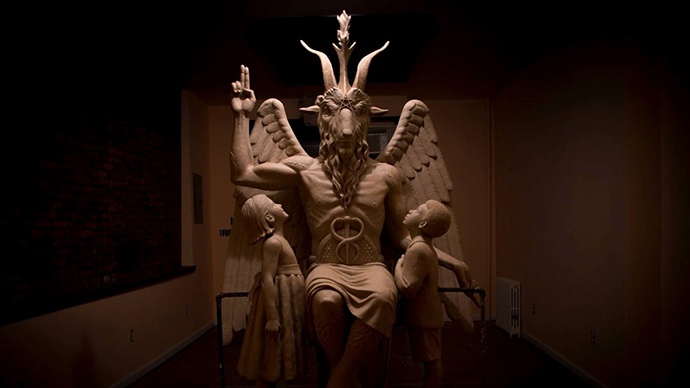 Unsure what to do about local Satanists who wanted to present the opening prayer generally reserved for adherents of Jesus at a City Council meeting in Phoenix, Arizona, the council has ended the tradition. Read the rest

The Satanic Temple -- a pair of fun-loving, non-Satan-believing religious freedom activists -- unveiled the statue of Baphomet they plan to put on the Arkansas State Capitol's lawn to complement its existing Christian iconography. Read the rest

Remember the fun Satanic Temple that fought to put a statue of Baphomet on the grounds of the Oklahoma Capitol and held a "pink mass" at the grave of the mother of Wesboro Baptist Church founder Fred Phelps to turn her "gay in the afterlife?" The New York Times talked to the Satanic Temple's two chief instigators, "Malcolm Jarry" and "Lucien Greaves" (aka Douglas Mesner), about their approach to poignant political pranksterism in the face of conservative Christianity. Read the rest 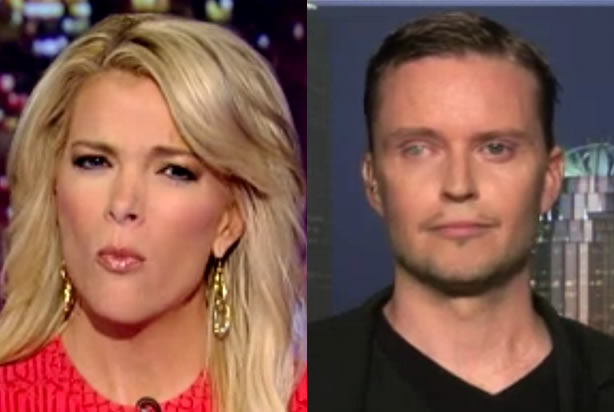 Megyn Kelly was prepared to argue with a moron when she invited the Satanic Temple’s Lucien Greaves on her Fox News program, The Kelly File. It soon dawned on her that Greaves was articulate and intelligent, yet she was unable to deviate from her script and as a result, she ended up looking foolish and had to resort to scolding him that she was lawyer, so her opinion had to be correct.

Greaves was the guy who proposed to erect a statue of Baphomet on the Oklahoma state capitol to “complement and contrast the 10 Commandments [monument on the capitol], reaffirming that we live in a nation that respects plurality, a nation that refuses to allow a single viewpoint to co-opt the power and authority of government institutions.” On Tuesday the Oklahoma Supreme Court ordered the removal of a Ten Commandments monument, and as a result Greaves decided not to erect the Baphomet statue.

Kelly attempted to get Greaves to acknowledge the validity of Attorney General Pruitt’s argument that the Ten Commandments have “historical meaning,” but he parried, saying that he would do so only if she acknowledged that Baphomet had a similar significance. “The image [of Baphomet] goes back to the 19th Century,” he said, “so it’s at least as old as Mormonism.”

It's been a year since we featured the amazing, Satan-and-sasquatch themed Christmas sweaters at Middle of Beyond, and they've brought out their new line, which includes a 2D tiger-skin rug, Shining runners, a D20 rug, D20 sweaters, Satanic cardigans, zombie Santa sweaters and so much more. I know what everyone's getting for Krampusmas this year! Read the rest

The Devil and Antonin Scalia

Have you seen evidence of the Devil lately?

You know, it is curious. In the Gospels, the Devil is doing all sorts of things. He’s making pigs run off cliffs, he’s possessing people and whatnot. And that doesn’t happen very much anymore.

So what’s he doing now?

What he’s doing now is getting people not to believe in him or in God. He’s much more successful that way.

This pentagram visible on Google Maps is located on the shore of the Upper Tobol Reservoir in Kazakhstan. It's either an evil etching created by the ancient astronauts who were also Satan's minions, or the outline of a park built in the shape of a star during the Soviet era when that symbol was quite popular. You decide. (Yahoo! News) Read the rest

Uncle Acid and the deadbeats are an excellent retro psychedelic metal band from the UK. (Peter Bebergal talked about them on last week's episode of GWeek.) This video is for "I'll Cut You Down" from their album Blood Lust. They also have a new record out, Read the rest

In this terrific video, Church of Satan founder Anton LaVey talks about how his interests in the arcane, magic, and showmanship were inspired by the mentalists at old time carnival midways. He also recalls his experiences as a professional calliope player in the 1940s-1960s and plays a few delightful tunes. (Thanks, Jenny Hart!)

UPDATE: BB pal COOP says, "This footage is from a documentary by Nick Bougas. These keyboards were set up in the kitchen of the Black House. I spent many nights in that kitchen listening to Dr. LaVey play. He had an encyclopedic knowledge of popular music, and could play almost any song that came up in discussion." Read the rest

Invisible Brooklyn, sellers of fine curiosities and devilish artifacts, just posted two terrific tomes from the early 1900s to Instagram. I think both would best be enjoyed accompanied by a puff on the antique skull pipe, while wearing a smoking jacket. Red, of course. Read the rest