Girls can be Eagle Scouts too 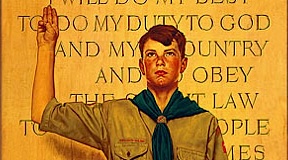 The Boy Scouts of America are set to drop the "Boy" from "Boy Scouts" come February 2019 and open scouting to all. Now girls can slave their teens away to become Eagle Scouts too!

I was a Scout. Every day I use things I learned from Scouting; from knots to time management I am better off for my time, and adventures, in the Scouts. Troop 2 Santa Monica was led by a folks dedicated to the scouts, didn't matter what we looked like, who we worshiped or wanted to date. That was not always the case in Scouting. There were still no girls.

The last few years appear to be bringing change pretty quickly to the National organization.

I never made Eagle.

The Boy Scouts program is becoming Scouts BSA in February 2019 to reflect the decision to include young women, the Boy Scouts of America announced on Wednesday.

The organization's name will remain the same; only the program for older youth will change its name.

The Cub Scouts program for younger children was the first to open up to girls. Thousands of girls have already joined under an early adopter program.

Other Boy Scouts programs for older youth — such as an outdoor adventure program called Venturing — were already open to girls. But those programs didn't offer girls the chance to attain the highest rank of Eagle Scout.

BSA to Hacker Scouts: change your name or be sued

The Hacker Scouts is an organization "that focuses on STEAM (science, technology, engineering, art, and math) education, skill building and community engagement with the aspiration to help our children develop skills in the areas they are truly interested in, abilities that would allow them to dream big and create big." They filed for a trademark on the name "Hacker Scouts" and got a legal threat from lawyers for the Boy Scouts of America. After a protracted back-and-forth by mail, the Hacker Scouts have gone public, because the BSA won't soften its position: call yourselves the ____________ Scouts, and we'll sue. Read the rest

An investigative report by the Los Angeles Times shows that the the Boy Scouts of America has, for about a century, used a secret blacklist called "perversion files" to track sexual predators within the organization.

Scouting officials say they've used the files to prevent hundreds of men who had been expelled for alleged sexual abuse from returning to the ranks. They've fought hard in court to keep the records from public view, saying confidentiality was needed to protect victims, witnesses and anyone falsely accused.

"It is a fact that Scouts are safer because the barrier created by these files is real," Scouts Chief Executive Robert Mazzuca said in video posted on the organization's website in June.

A Los Angeles Times review of more than 1,200 files dating from 1970 to 1991 found more than 125 cases across the country in which men allegedly continued to molest Scouts after the organization was first presented with detailed allegations of abusive behavior.

So, if this is true: the BSA is not okay with LGBT participation, but more than a hundred known child molesters managed to operate within the organization, even after being identified as predators? Good to know.

Kaspersky Lab has pulled out of the Business Software Alliance (a trade group dominated by Microsoft) because of the group's support for the Internet-killing SOPA law currently working its way through the US House of Reps: "the company believes that the SOPA initiative might actually be counter-productive for the public interest, and decided to discontinue its membership in the BSA as of January 1, 2012." Read the rest

Bunnie "Chumby" Huang, whose Hacking the Xbox is a reverse-engineer's bible, has been asked to testify at the trial of Anaheim's Matthew Crippen, who faces three years in prison for jailbreaking Xbox 360s (that is, modding them so that they could run software that Microsoft hadn't authorized). But federal prosecutors have asked the judge to prevent Bunnie from testifying.

The 35-year-old Huang argues that mod-chipping is not a violation of the Digital Millennium Copyright Act, which makes it unlawful to circumvent technology designed to prevent copyright infringement. He said he hopes to prove that point to jurors via a step-by-step tutorial.

"Basically, what he did was insufficient on his own to violate anything," Huang said in a recent telephone interview from Singapore, where he serves as vice president of hardware and general manager for Chumby's operations in Asia.

Additionally, Huang said, the DMCA should be interpreted to allow for "fair use" exemptions, so chipping a console for legitimate purposes would be permitted, even if it is found to be a circumvention.

The U.S. Copyright Office, he noted, just granted an exception to the DMCA to allow the jailbreaking of cellphones, and the iPhone in particular, allowing the iPhone to run third-party apps not approved by Apple. Modding a game console should be treated the same way, he said.

Here in the UK, the Business Software Alliance is running its annual paid informant "Nail Your Boss" program, in which they give big cash rewards to people who fink out their employers for running pirate software. This happens every year, but it reminded me of one of the funniest incidents in my life as a copyfighter:

I was guest-lecturing for a week at a master class on issues related to international copyright to grad students at Budapest's Central European University. The speaker following me was the lawyer who ran the Hungarian division of the Business Software Alliance. He described the many means by which the BSA tried to combat piracy, and then he mentioned this paid informant program.

There was an audible intake of breath, emanating primarily from the Eastern Europeans in the room. They'd lived through the Soviet era. They knew how corrosive it is to pay people to snitch on their neighbors. They know that it leads to score-settling, axe-grinding, and blackmail.

The BSA man instantly recognized his mistake and held his hands up placatingly.

"Oh, we don't use paid informants in Eastern Europe! That would be culturally inappropriate.

"No, we use paid informants in England."

I get the funniest looks when I tell that story here in London.

Narc on Your Boss, Get Cool Cash Read the rest