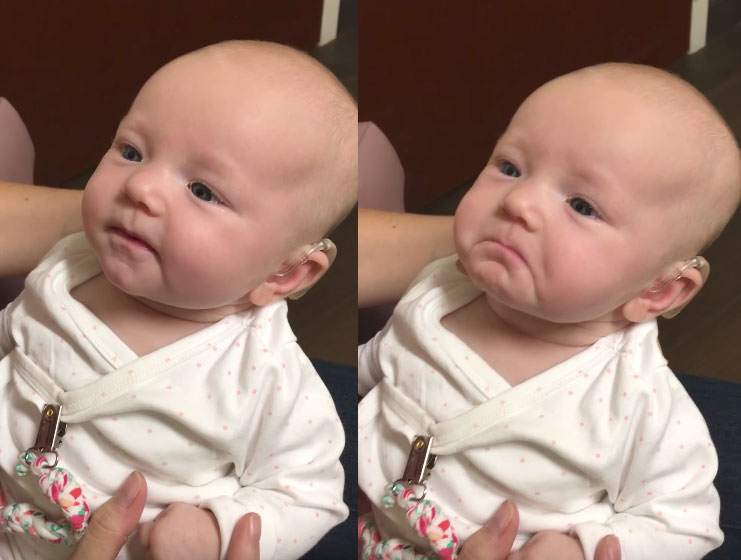 According to her mom, blogger Christy Keane, baby Charly was born "profoundly deaf." In this truly heartwarming video, you'll see this precious child responding to her mom's voice for the first time ever through the miracle of hearing aids.

Charly gets quite emotional and seems unsure whether to smile or cry. Who can blame her?

On Instagram, Keane writes, "We didn't think she would hear anything so this was more incredible than I can put in to words."

Deaf man writes that TSA agent mocked him as “F*cking deafie,” then stole his candy, ate it

Update (June 12): The young author of the post alleging mistreatment by the TSA contacted Boing Boing to request that we delete/unpublish this blog post, explaining that he hadn't intended the story to "go viral." He then took down his account from his Tumblr (which, before this widely re-posted item, appears to have been a small personal blog read by a small number of real-world friends). Today, the TSA also published this post at the official TSA blog. Snip: "A close examination of the video during this timeframe indicates that officers working the checkpoint were professional and appropriate with all passengers." The author of the original Tumblr post told Boing Boing he wants privacy.

teaandtheatre, who is deaf, writes about an upsetting incident of "ableist" or "audist" harassment he claims to have received from the TSA, while going through a screening at the Louisville, Kentucky airport.

He explains that he was returning home from the National Association for the Deaf's biennial conference, with friends who'd attended the same event for deaf rights advocacy. He writes on Tumblr that he wrote the post as a kind of heads-up for other deaf folks, but it has gone viral outside of that community. Snip:

While I was going through the TSA, some of them started laughing in my direction. I thought it might’ve been someone behind me, but I found out otherwise.

They went through my bag (for no reason), and found a couple bags of candy I brought. I was told I wasn’t allowed to fly with that (wtf?

[Video Link] sloanchurman says: "I was born deaf and 8 weeks ago I received a hearing implant. This is the video of them turning it on and me hearing myself for the first time :)" (Via Sean Bonner) Read the rest

HOW TO: Spell with your fingers in different languages

Last year, I stumbled across some of the cool history of American Sign Language, documenting how it evolved out of both formal and informal languages—systems Deaf children used to communicate at home, and the systems they were taught as Deaf schools drew diverse groups from a wide geographical range. For American Sign Language, this process happened in the 19th century. In other parts of the world, it's still ongoing. For instance, in Nicaragua, Deaf people who are in school now are learning a much more formalized language, with a much bigger vocabulary, than those who went to school in the 1980s.

Those international differences are fascinating to me, so I'm really pleased to find this post on the Sinosplice blog, discussing the Chinese system of finger spelling. The blogger there is a linguist, so there's a lot of neat perspective in the linked post and others on the linguistic mechanics of finger spelling and sign language in China.

Finger spelling is very different from a sign language. In a sign language, you'd have one hand movement or hand position that stands for the concept "bird." In finger spelling, you'd have several different movements/positions for each letter or sound of the word "bird." You probably picked up some American finger spelling from Sesame Street, it's likely to at least look somewhat familiar. But the really cool thing about this post, is that it contrasts that system with the finger spelling alphabets used in Russia, Japan, and several that have been used historically in China. Read the rest