Watch how to make a homemade Van de Graaff generator 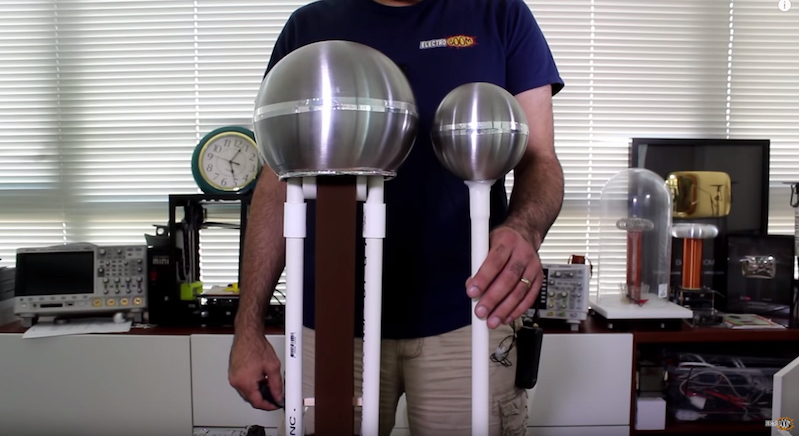 Ever wanted to build your own voltage generator for fun and profit? YouTuber ElectroBOOM shows how with stuff that available at better hardware stores. Read the rest

From the August 1951 ish of Mechanix Illustrated, a modest HOWTO describing a "Snooperscope" that requires a 4,000 to 6,000-volt power-supply to fire infrared light at and through the materials around you.

Construction of the snooperscope: The image converter tube is mounted in a plastic drinking cup 3-1/2 in. high by 2-1/2 in. in diameter. The optical system required depends upon your intended use. We used a small tripod type magnifier lens of 10 power (1 in. focal length) for the front lens and objects from three inches to one and a half feet can be focused. There is no reason why a greater range cannot be had with this lens by moving it closer or farther away from the tube.

After selecting the lens system mount it in a hole cut into the bottom of the cup. A jeweler’s saw or coping saw is ideal for cutting the hole. Paint the inside of the cup with black paint. Black airplane dope works fine. No light other than that from the lens must be permitted to hit the tube. Place an infrared filter between tube and lens to reduce effects of stray white light.

The image converter tube is inserted with the graphite side toward the front lens and the metal ring toward the mouth of the cup. A thin flexible lead from the metal ring connects to the positive side of the power supply. Some tubes were manufactured without this lead, in which case a piece of spring metal pressed against the metal ring will work just as well.

Playing Black Sabbath on Tesla coils with an iron guitar, standing in a Faraday suit

If you need me to explain why you should spend 1:26 watching a man wielding an iron guitar in a Faraday suit playing Black Sabbath's "Iron Man" on MIDI-compatible Tesla coils, you are in the wrong place, pal.

ArcAttack is performing a Tesla Coil version of Iron Man by Black﻿ Sabbath. The Guitar Player is using an iron guitar in a faraday cage

ArcAttack testing out the world's first lighting-proof MIDI guitar in their warehouse in Austin, Texas.

The MIDI signal from the guitar is routed through a fiber optic cable to control the Tesla coils.

Update: From the comments, ArcAttack clarifies, "The guitar isnt iron though, its actually made out of wood with shielding and a couple of micro-controllers hooked up to a switch bank (the fret board) and is all optically isolated. The giant fan in the back isn't for sucking ozone. It was 100 degrees that day and being in a metal suit can get pretty hot. And in reference to Manny's comment, our interview went as follows "THEM: What happens when something goes wrong? US: We have many safety controls to minimize any major problem. If something goes wrong we just turn it off. THEM: is lightning deadly? US: Lightning is very deadly, but our machines arnt nearly as dangerous as real lightning."