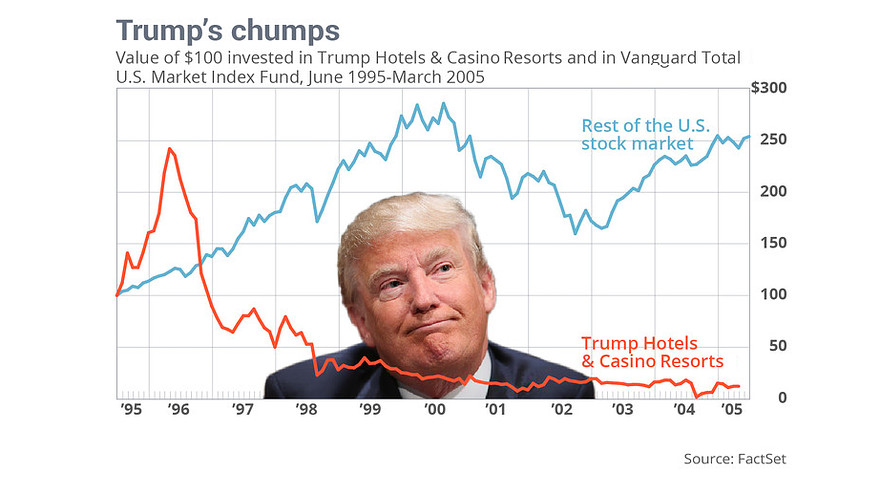 When confronted with the fact of his four bankruptcies, Donald Trump argues that he was just being a shrewd businessman, restructuring his affairs to maximize profits. But when The Donald took one of his companies public, we got an unprecedented look into his fiscal incompetence. Read the rest

The promised returns from globalization just aren't there: poor countries don't have as much to spend, corrupt governments undermine foreign multinationals, domestic rivals hack trade secrets out of multinationals foreign offices and doing business all over the world is complicated and expensive. Read the rest

Two players of the Eve Online MMORPG pulled off a Ponzi scheme that netted them over 1 billion ISK (Eve Online's currency, a sum that can be exchanged for about USD50,000). They ran the Ponzi scheme like any other, soliciting customers for "investments" that paid out better-than-market returns, but those returns were generated out of the "investments" of new suckers. The con was both legal and within Eve's rules, and it's not the first or even the second massive (lawful) in-game fraud to hit Eve. The scammers have published a long postmortem on their effort, including some accounting information and ruminations on the hard work it took to hoover up their billions in virtual skiffy funny-money.

Why did we do it? We had a lot of reasons actually, but above all there is one thing that's NOT the reason. Most probably we will disappoint a lot of people, even make more than a few a little angry for a while. That, in itself, has never, ever been our purpose. We consider that to be a collateral matter. However, enough about what wasn't the reason for doing it.

The main reason why we did it is; because we could! But, of course, we don't do everything we can. One should imagine that we have a lot of people with an account on Phaserinc.com. That account will be secured with probably the same password as their EVE online accounts. We could have easily run all these accounts through our EVE client and stolen a lot of assets as well as ISK.