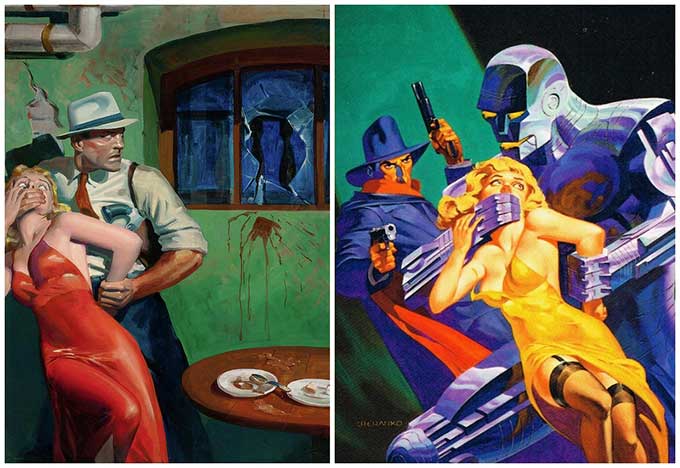 A friend of mine (who wishes to remain anonymous) shares my interest in finding swipes of famous illustrators and comic book artists. Neither of us begrudge these artists for swiping (that's the comics industry term for using reference material perhaps a bit too faithfully). After all, these artists worked under brutal deadlines and sometimes they had to cut corners to meet them.

"One of the great swipes," says my friend, "is Jack Kirby swiping a Hal Foster image and turning one panel that became an entire comics series and an integral part of the standing DC Extended Universe."

That swipe is well-known. But my friend found a swipe by the Great Jim Steranko which was previously unspotted:

"It appears that when Steranko painted the covers for the Shadow reprints, he swiped this cover from Spicy (Speed) Detective. The original artist was Hugh Joseph Ward and the periodical was Speed Detective June, 1945.

Wonder how much @McDonalds paid someone to copy my video. I didn't even get paid to make the original pic.twitter.com/XGWjHQq0j6

By the way, if you are unfamiliar with Harris' work, you are in for a treat. Here's a sample:

Frazetta swiped from the best

I'm not opposed to swipes. I like them! I look forward to the inevitable comment that comes with my posts about interesting swipes: "It's just a coincidence. There are only a limited number of poses a human body can make, and this is a common one."