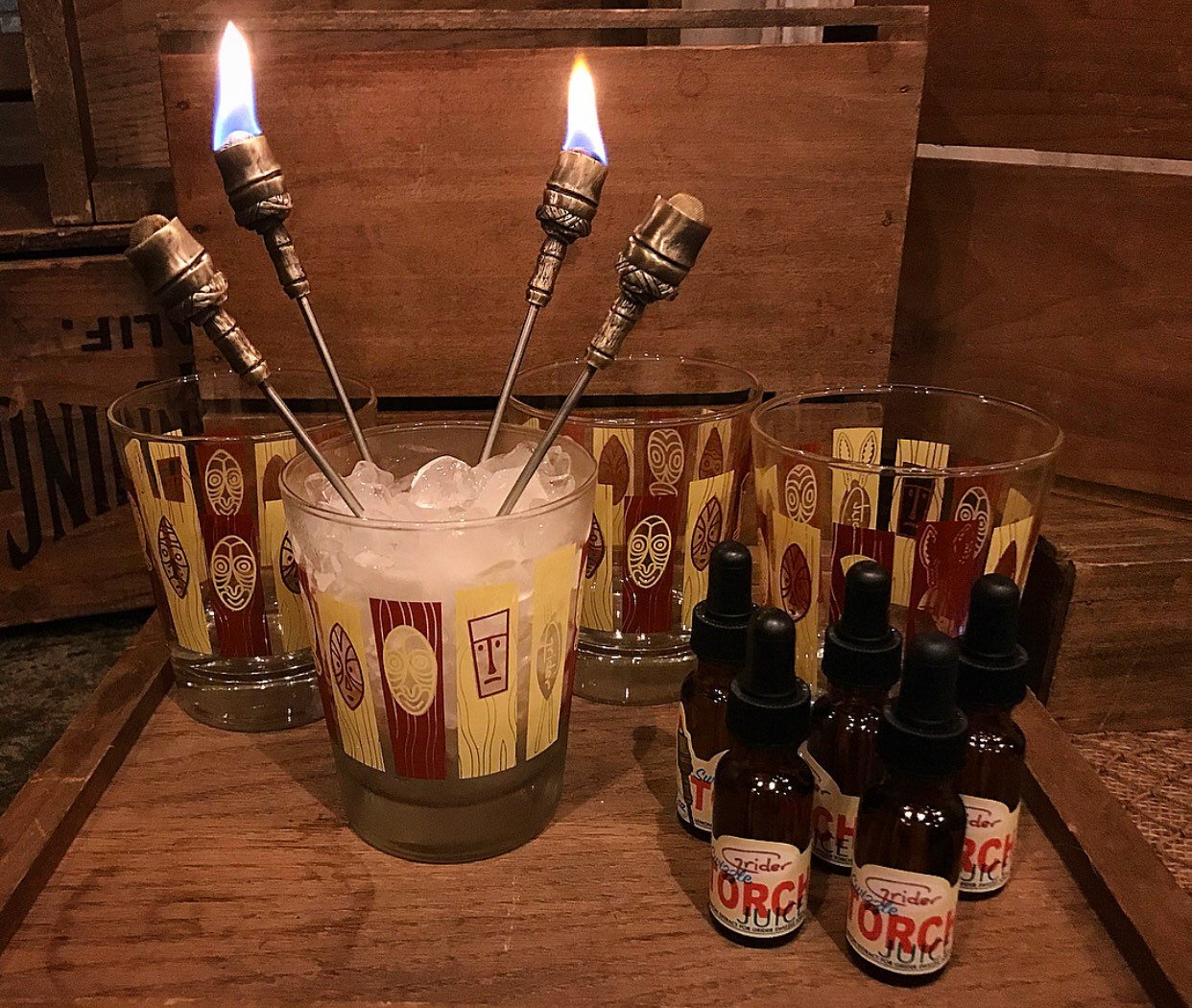 Warning: If you light this on fire, it will be HOT! Extinguish before drinking and if lit the metal torch topper will get hot to the touch! Do not burn yourself! We take no responsibility for injury! These are novelty items that are USE AT YOUR OWN RISK 😆 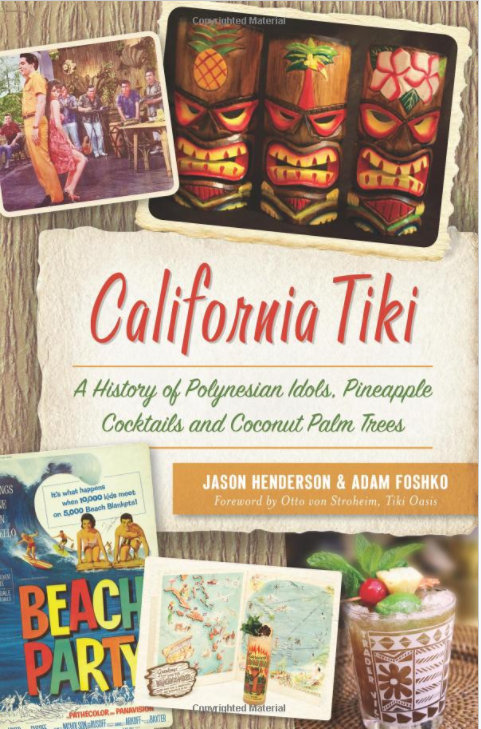 Available in paperback for $23.99. Read the rest 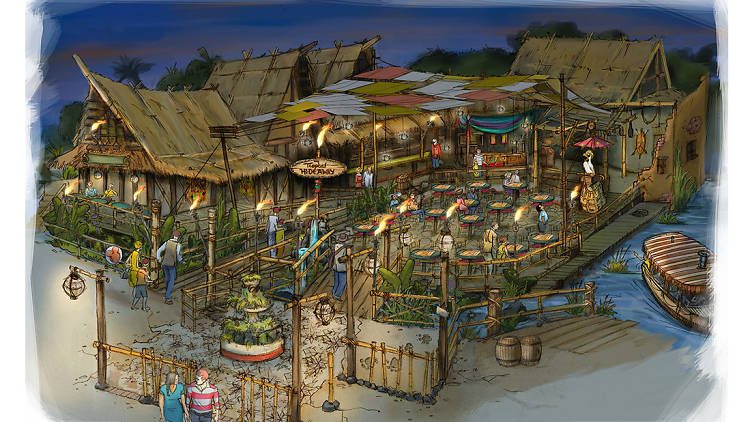 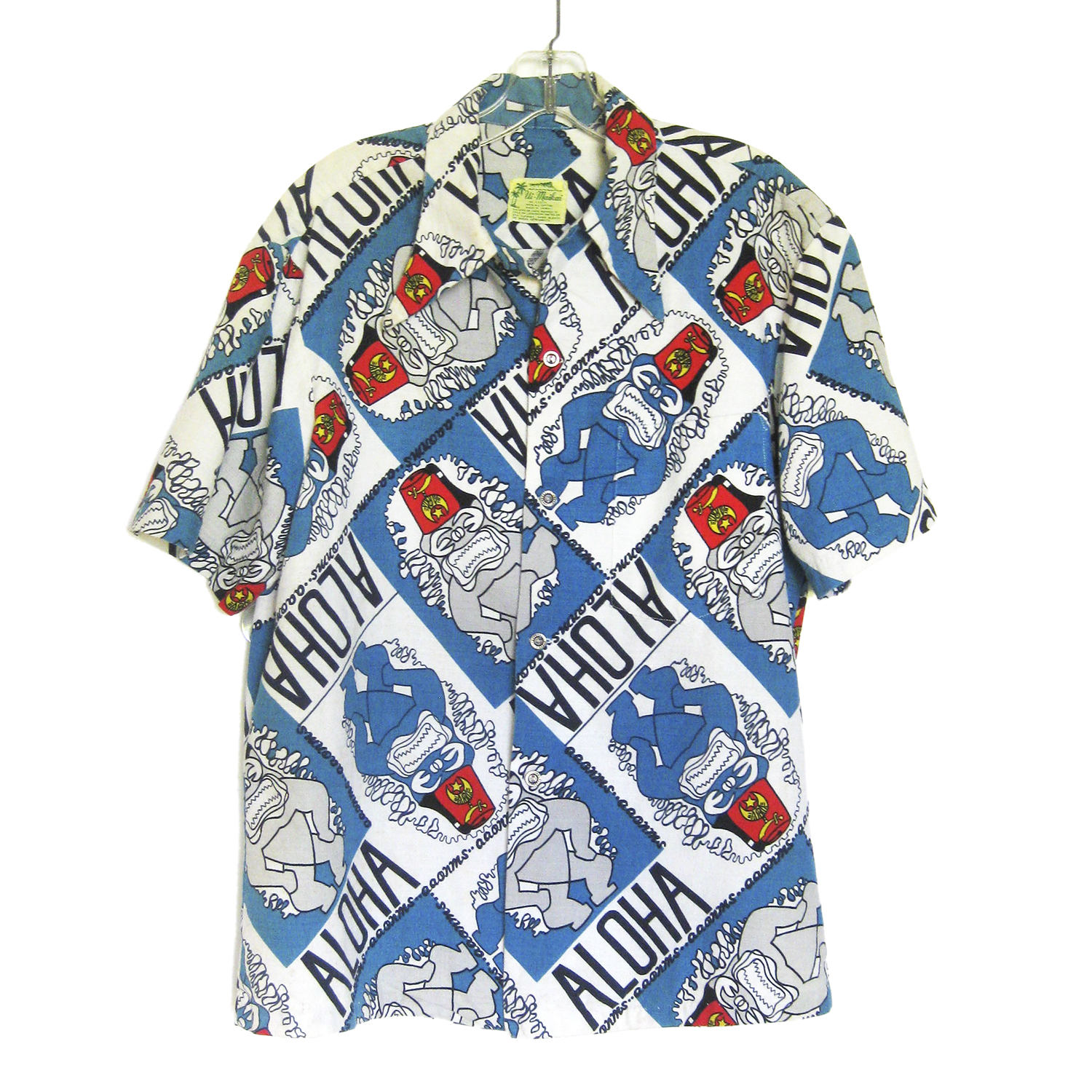 Check out this sweet mid-century Aloha shirt. It's got tikis wearing red Shriner fezzes. I bet it would have some stories to tell, if it could.

If you look closely at the fabric, you'll see the acronym of "aaonms." That stands for the "Ancient Arabic Order of the Nobles of the Mystic Shrine," the official name of the Shriners.

Looking this sharp comes with a price. This particular Hawaiian shirt, size unknown, is selling for $225 at Etsy shop vintagedame. An XXL one goes for $485 at the Hana Shirt Company. They report it is a "Hawaii Shriners Convention" shirt. Read the rest 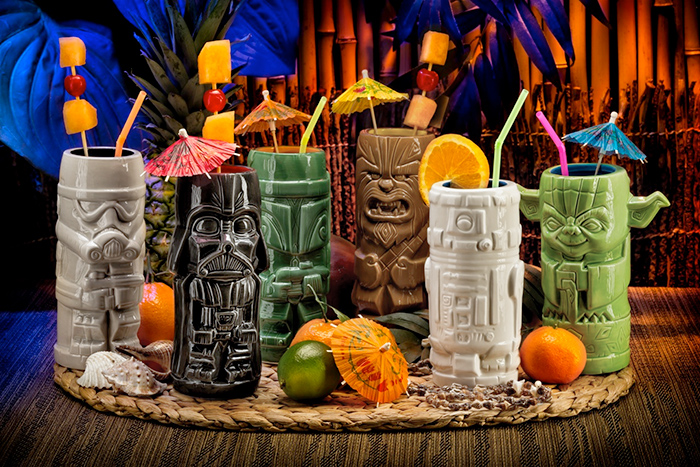 Polyhai's tutorial for creating a tiki-mug menorah is all the sholem aloha you need for eight nights of candlelit grog-swilling. Read the rest

Spotted last night at the Trader Vic's in Portland, OR: this dazzling tiki-gourd! Read the rest

A couple of cities back, in another century, I lived in a giant, illegal warehouse loft with tons of space, and in that loft, I built a most wonderful tiki-bar, with novelty bottles and stools that looked like bongo-drums and pennants from defunct cow-colleges, and swizzle sticks from bygone eras and more besides. I no longer have room for anything of the sort, but I still find myself seizing up with lust when I see something that would have fit it perfectly, such as this stonking 1959 deco tiki cocktail cabinet, for sale on eBay. I tried to convince myself to bid on it last night, tried to think of a place to put it, but honestly, there's nowhere for it. Plus there's no way I could ship this from southern California to London. But still.

We are pleased to present this vintage George Zee Cocktail Bar for your consideration. Manufactured in Hong Kong, this gorgeous piece opens to reveal a spacious Cocktail Bar that is loaded with storage. There are four (4) hidden compartments at the sides for stemware. Double doors on the front open to reveal two (2) drawers plus two (2) shelf areas. The front folds down to create a counter space, and the hinged lid opens to reveal a large compartment with a removable bottle holder.

In addition to plentiful storage space, high relief carvings of a Bamboo design are found on the door fronts and inside the top lid. What a great piece to compliment your Tiki or Hawaiiana themed room!

Spotted at Renovation, the World Science Fiction Convention in Reno: this killer tiki-themed Dalek. I didn't catch the artist's name -- anyone know it? Leave a comment and I'll update the post.

Update: From the comments, Michelle informs, "Made by Kevin Roche. It also won Best in Show at the Gallifrey One (Doctor Who convention) masquerade earlier this year."