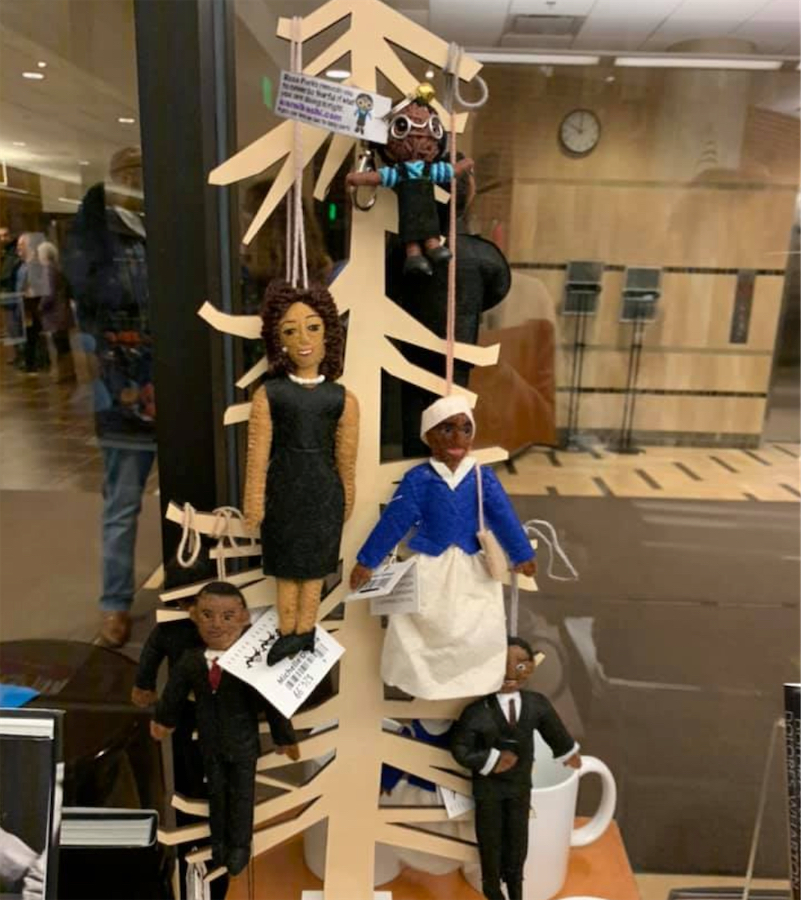 A Michigan State University gift shop displayed a collection of miniature dolls of black leaders like Michelle Obama and Harriet Tubman by hanging them from a small tree. Upset by this extreme insensitivity, grad student Krystal Rose Davis-Dunn says she asked the staff if they noticed anything wrong with the display but they apparently did not. After Davis-Dunn posted a photo of the display to Facebook, the university apologized. From CNN:

"We were made aware of an inappropriate and insensitive display at the Wharton Center gift shop which used a tree-like rack to hold historical black figures," Michigan State University spokeswoman Emily Gerkin Guerrant said. "Regardless of the intent of the display, its impact cannot be ignored -- people were hurt and offended."

Davis-Dunn told CNN she had initially asked the gift shop's employees if they thought anything was wrong with them, but they said no. "They're black people hanging from trees," she said. "I mean, lynching? It was just not registering with them."

The incident is the latest in a string of racial insensitivities on Michigan State University's campus in the 2019-2020 school year. 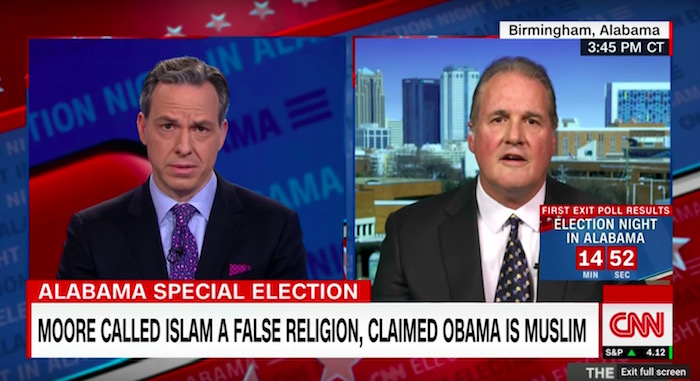 Yesterday, before Democrat Doug Jones beat Republican child predator Roy Moore in the Alabama Senate election, we were entertained by an idiot spokesperson for Moore on CNN. Ted Crockett, said spokesperson, was talking to Jake Tapper, trying to defend Moore's view that Muslims shouldn't be allowed to serve in congress.

“You don’t actually have to swear on a Christian Bible," Tapper said. "You can swear on anything, really. I don’t know if you knew that.”

“Oh no, I swore on the Bible. I’ve done it three times," Crockett said, as if because he chose to swear on the Bible, swearing on the Bible is the law.

Tapper patiently explained to Crockett, “I’m sure you have. I’m sure you’ve picked up a Bible, but the law is not that you have to swear on a Christian Bible. That is not the law.”

At this point Crockett was so befuddled he just stared blankly, mouth agape, for much too long of a time on live TV. The dead air was almost as dead as the look on his face.

Finally Tapper broke the silence. "You didn't know that?"

Crockett still stared blankly, before sputtering, “I don’t know. I know that Donald Trump did it when we made him president.” Read the rest

And those things aren't true, according to an Ipsos-Mori poll that put the USA second-from-the-top in the race to see who's the most ignorant, preceded only by Italians. Read the rest

Britain's Great Firewall of Cameron has just made the jump from "voluntary" to "mandatory." The UK government has announced that the demand that all ISPs offer an opt-out "adult content" filter will soon be a requirement, covering even small ISPs and ISPs that advertise themselves as censorship-free. ISPs will be required to operate filters that do not "unintentionally filter out legitimate content" -- effectively, this is a mandate to go shopping for magic beans. Jim Killock from the Open Rights Group sez: Read the rest