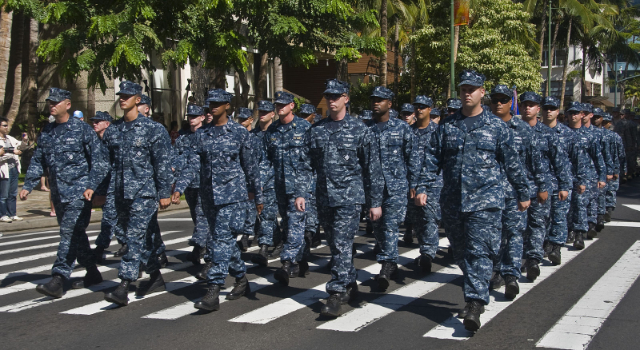 In its latest bigoted move against anything that doesn't share DNA with a loaf of Wonder Bread, the Trump Administration unveiled a new policy on Friday that will all but eliminate the ability of transgendered patriots to serve in the military.

It's the continuation of shit that he's hoped would stick to Washington's bureaucratic walls in the past: in August of last year, Trump sent Defense Secretary Jim Mattis a memo that ordered him to change a policy put in place by the Obama administration. The policy allowed transgendered soldiers to proudly lay their lives on the line for their country and receive the quality medical care they deserve in thanks for their service.

The force behind Trump's stab at transgender service members comes from a policy laid out by the Pentagon and the Justice Department in February: it states that military personnel need to be available for deployment for up to a year at a time. If you can't hack that, you can't stay in the ranks. That could temporarily interrupt the military career of individuals who plan on having a child or come down with a severe illness that requires extensive medical treatment outside of a war zone. But it absolutely screws anyone seeking gender reassignment surgery, which can span multiple, complex visits under the knife. It actually sounds reasonable, when you think of it in terms of medical care and deployability. But that's because it's supposed to: the most hateful bile often comes from the mouths of seemingly rational men.  Read the rest

On Monday, I published a letter from my husband, Christopher Baker, to the Boy Scouts of America. In that letter, Baker returned his hard-earned Eagle Scout award and explained that he no longer wanted to be associated with an organization that discriminated against gay teenagers and GBLT parents. By the end of the day, I'd posted six updates to that story—adding letters from other Eagle Scouts who had joined my husband in resigning from a fraternity they had loved and had worked incredibly hard to join.

The Boy Scouts of America is a private organization. The Supreme Court has said they have the right to discriminate. What these Eagle Scouts are saying is that legal precedent doesn't make the discrimination right. Overwhelmingly, they've said that it makes them sad to see the organization that meant so much to them go against the very values of inclusion that it taught them as children. As Baker wrote, "banning openly gay scouts and leaders is not a neutral position any more than separate-but-equal was a neutral position on race."

Yesterday, I received more letters from other Eagle Scouts who want the Boy Scouts of America to know how disappointed they are, and that they choose to stand with the persecuted rather than with the people doing the persecuting. In this post, you can read inspiring words from 13 Eagle Scouts who asked that I share their letters. In most cases, I've included a photo of the letter, and quoted text for easy reading. Read the rest