Tom Sutcliffe compiled a helpful survey of "Typefaces of Protest" hand-drawn by covidiots, conspiracists, and other "truth" tellers.

What Portland protesters want you to know: "This a fight for all of us" 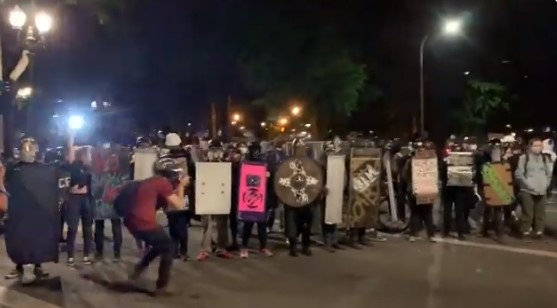 With Trump threatening to deploy more agents to other U.S. cities, we should be paying close attention to what's been happening in Portland.

Over the weekend I asked a friend up there, one who's been showing up for the protests regularly, what the scene is really like and if she knew what needed to be shared to a wider audience. The main message? Protesters are hoping people outside Portland understand that "this a fight for all of us." She also shared:

Having the FEDS here is super scary for the state of our democracy (and a sign that Trump is a bloody fascist). The local cops have also been gassing and beating up protesters here for weeks with no oversight and little provocation.

The clashes between protesters and police here on the ground is isolated to a small area and happens late at night — but the threat to our democracy is real and present. The cops — both local and Feds are brutalizing people, mostly young and dis-enfranchized folks like the houseless and mentally ill. They pepper spray and beat them every night. It is scary to see.

"There is a nationwide call now for solidarity marches on July 25 -- one in most major cities including Oakland," she also wrote.

She offered press collective @45thabsurdist as a "real-deal" trusted source, "they're the ones out every night getting gassed." Here's a tweet from them, dated June 26:

Here’s what the hell we’re doing & why.

Trump's cowardly fence becomes a powerful message board for protestors 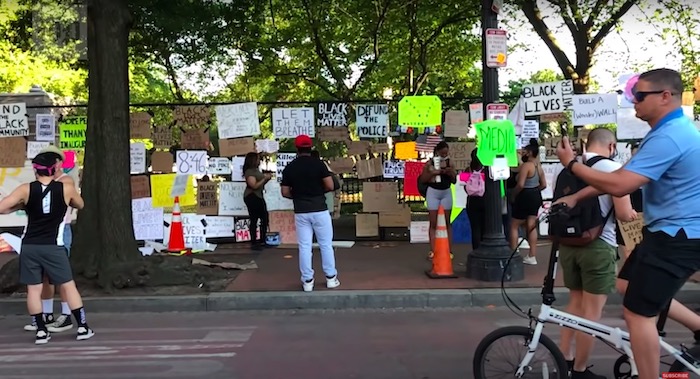 In early June, about a week after George Floyd was murdered by police in Minneapolis — followed by the Trump administration gassing and shooting at peaceful protesters — Trump scuttled into a bunker to hide. He then built an ugly fence to cower behind. Now the eyesore has transformed into a wonderful collage of flowers, art, and messages like "Fuck Trump," "Black Lives Matter," "Let Them Breathe," "8:46," "The Media is Not the Enemy," and "Fund the Black Community."

Thanks for the free cork board Trump!

Internet users get it done fast: the identities of animal abusers, the provenance of clever media hoaxes and the details of shocking crimes are often exposed within minutes. To the galleries of summary internet justice we can add another new art: spotting, catching and exposing provocateurs who encourage protestors to break the law. [OC Weekly] Read the rest