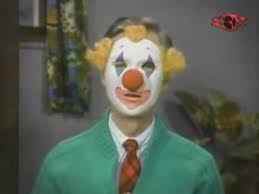 "I want to show you something," intones Mister Rogers, showing these pikers how he's been terrifying children with his creepy clown prank since 1968. Read the rest

Weird clown startles couple at cemetery in the night 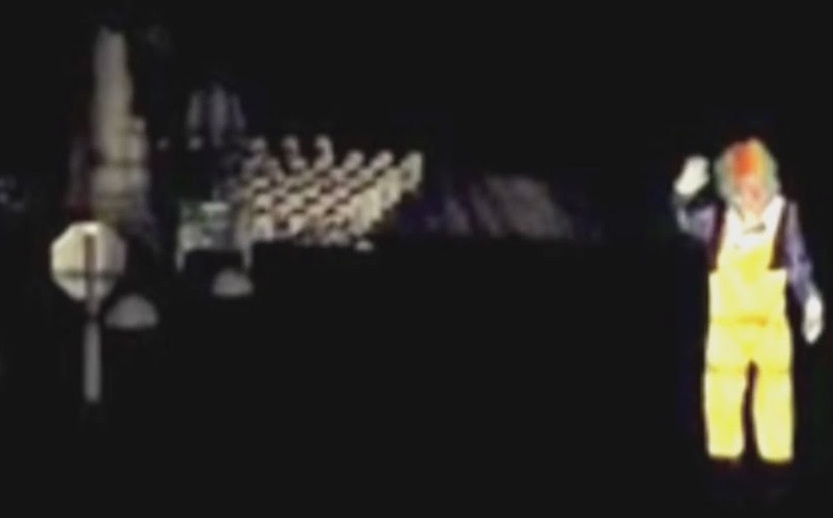 Driving past a Chicago cemetery at night, Julia Graham and her husband were "freaked out" when they noticed a clown who climbed the 7-foot gate and "waved slowly" at them as they took photos.

"I mean, this was somebody putting forth a lot of effort — and being really weird,” Graham told CBS Chicago.

This horrifying clown mannekin was reportedly placed on a hiking trail deep in the Oleta River in Aventura, Florida by a park employee who got it from the Enchanted Forest Elaine Gordon Park in North Miami.

If you went hiking through Oleta River in Aventura Florida last year, you probably shit your pants a couple miles in. (imgur.com) Read the rest

A man has been convicted of extortion in a bizarre scheme that involved collecting the loot while wearing a clown suit and riding a miniature bicycle. Frank Salvador Solorza targetted his immigrant cousins in Redwood City, sending letters and calling them, posing as an immigration officer who threatened to deport them unless they paid him $50,000 to ensure that their papers "would be good forever." The family called the police, who worked with them to arrest the blackmailer, who called and told them that the money would be collected by "a man in a clown suit and riding a small bicycle."

Solorza was arrested after picking up a bag which he believed contained $50,000, wearing "a clown suit, a clown glitter wig, a Pirates of the Caribbean hat (complete with dreadlocks), and sunglasses." He was riding a small bicycle. He was carrying a receipt for the outfit from the House of Humor costume store in Redwood City. Perhaps he intended to return it after the caper.

Solorza is a cousin of the alleged victims, who emigrated from Mexico. The father of four said three Norteno gang members had put him up to the scam.

The feds didn't buy that.

Blackmailer in a clown suit gets 3 years

NK Guy sez, "Every year dozens of clowns gather in a London church to celebrate the life of Joey Grimaldi, the father of modern clowndom, who died in 1837. They also mourn the passing of any fellow clowns who may have died that year."

I used to have an office around the corner from Exmouth Market, Grimaldi's former home, and I loved to stop and admire his blue disc (alas, my landlords went batshit and I had to move; luckily I found new digs right under the marvellous London Hackpspace).

Born of an Italian father and an English mother in 1778, Grimaldi lived and worked in the world of London theatre. His talent for physical comedy made him a massive superstar of his age, though Grimaldi's life fell into a predictable pattern of tragedy, and he died broken and crippled in Islington, age 58.

Since the war, British clowns have been holding a special memorial service each February to celebrate the life of this founder of British clowndom. And since the 60s Holy Trinity Church in Hackney has permitted them to attend in full clown regalia. The event is organised by the Clowns International group, who also maintain a small clown museum in Wookey Hole.

Silvia Viñas at Global Voices reports that Victor Trujillo, a television host on the Spanish language Televisa network who plays the character of "Brozo the Creepy Clown," was not amused by a Twitter user's fake account impersonation of Brozo's co-star Marissa Rivera.

"You are in danger," the green-wigged clown intoned, in what has since become a widely-circulated web video and a trending Twitter topic (#brozo).

His actual words in Spanish to the fake tweeter were,

Which means, more or less: We know about you. We're very close to you (we're on to you). Now you've really fucked yourself. Read the rest