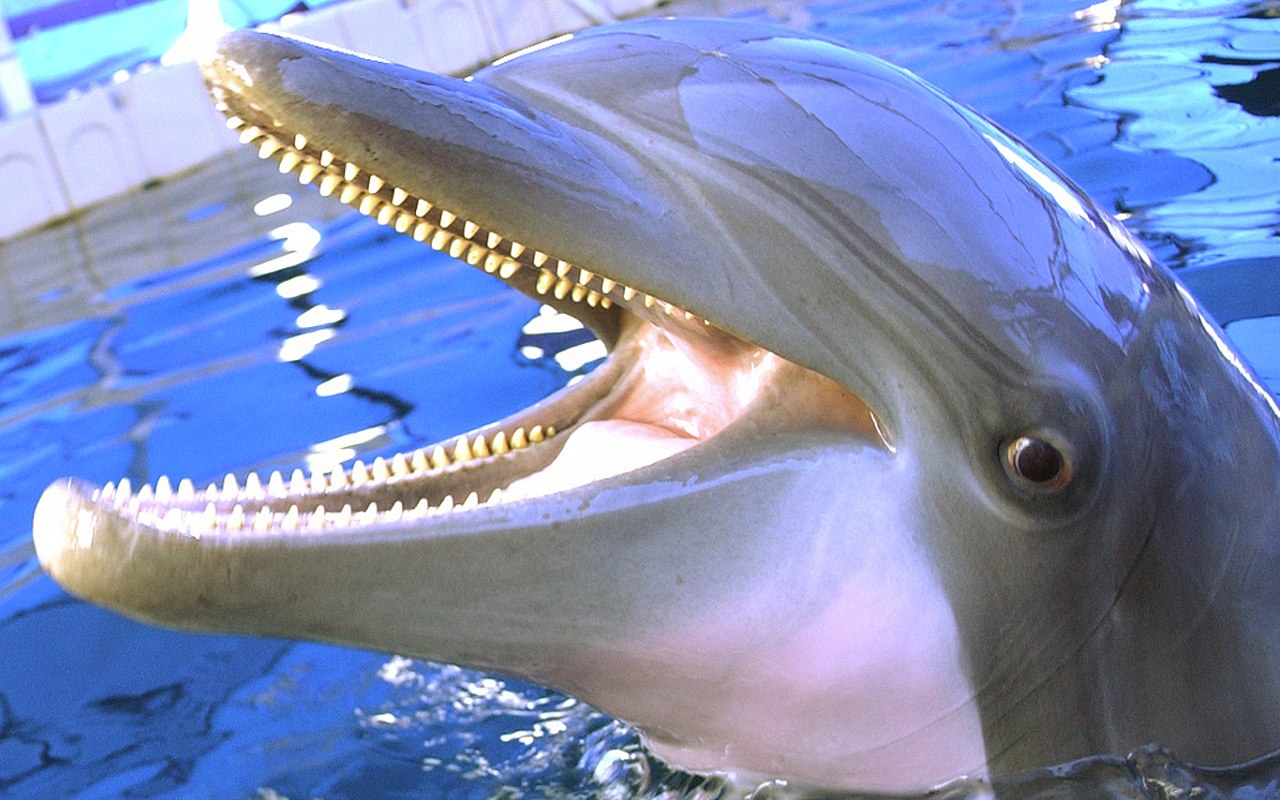 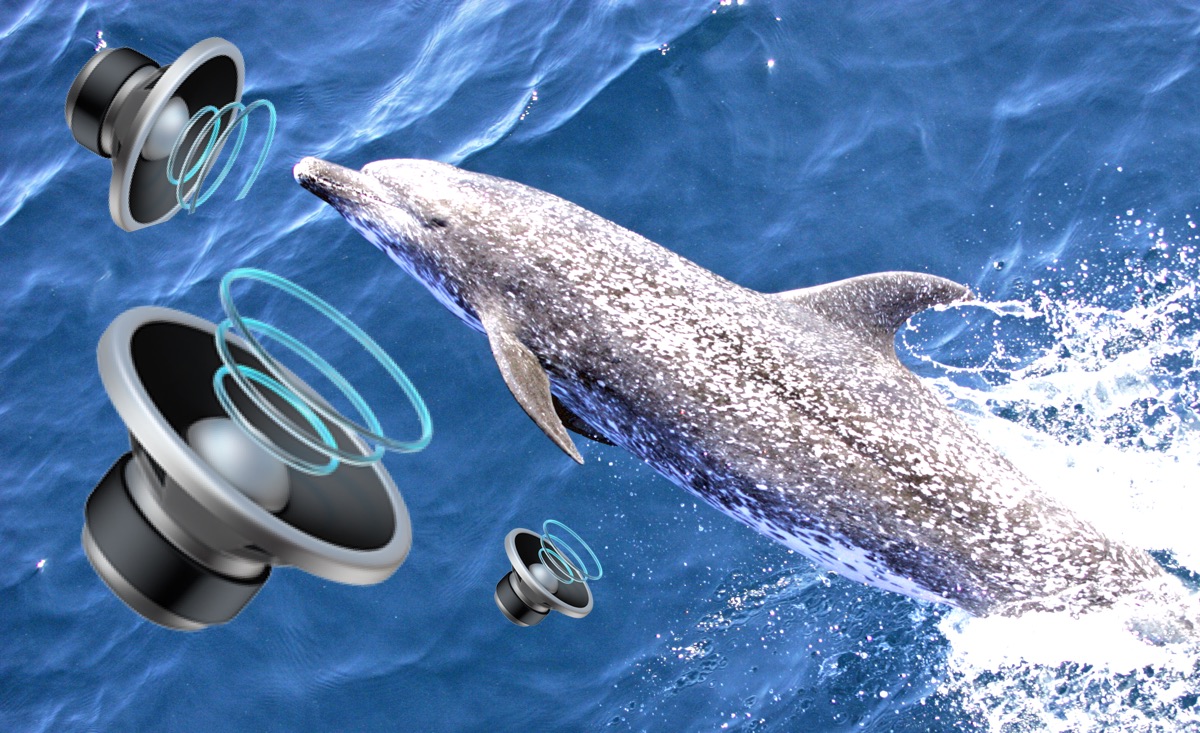 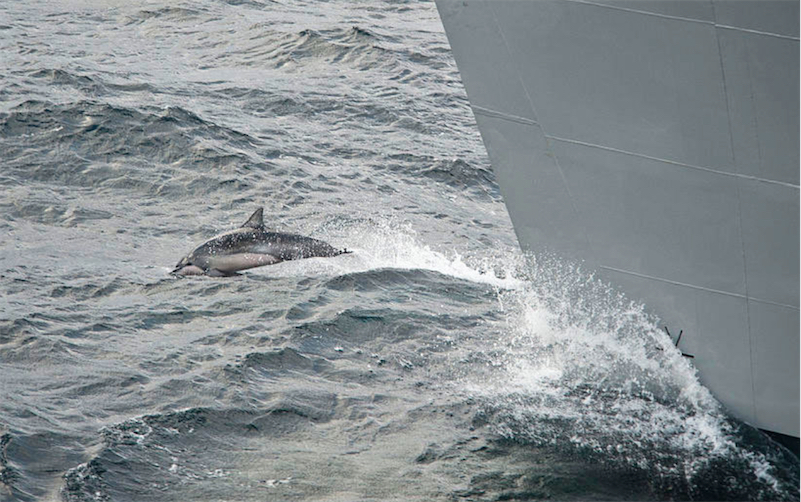 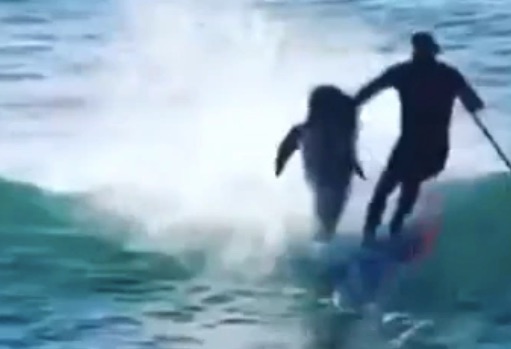 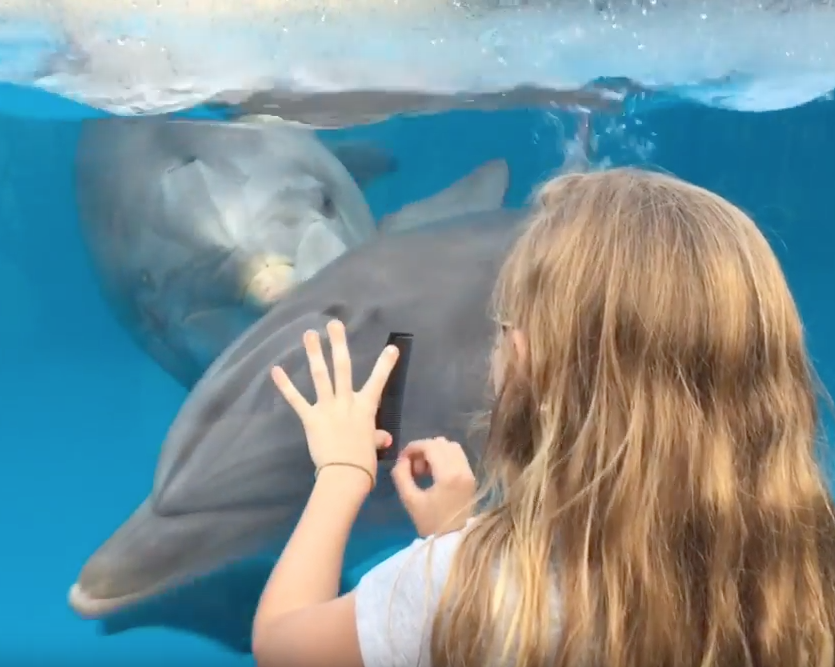 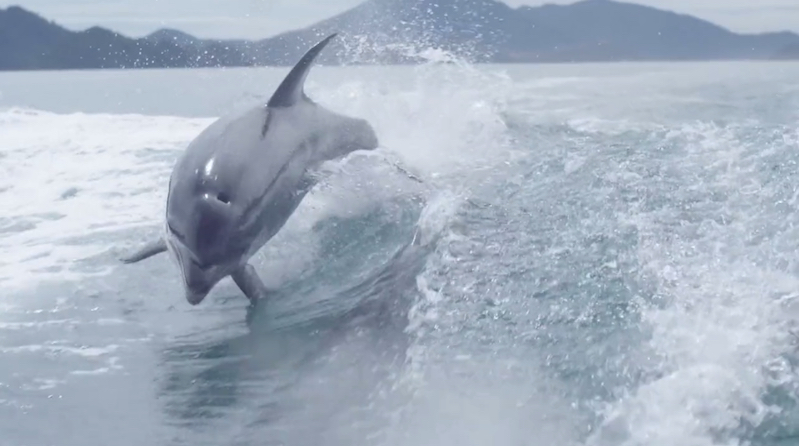 Damian Christie captured video of these frolicking bottlenose dolphins chasing his boat through the Marlborough Sounds in New Zealand. Read the rest 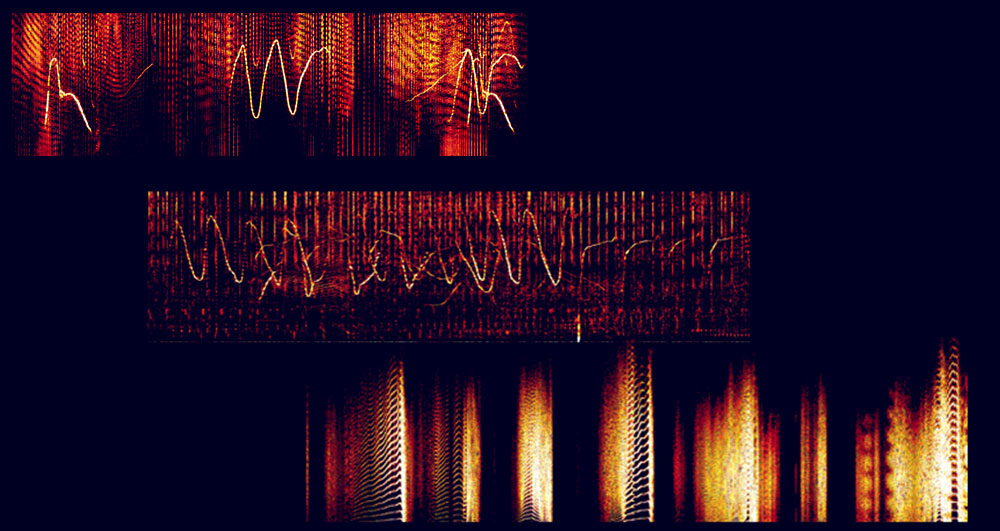 Spectrograms of dolphin calls are closer to written English than the signatures I'm able to scrawl on credit card machines in grocery stores. We really should stop messing with these people—who knows what they might be up to?

Voices in the Sea has recordings of twelve different species. Don't miss the selection of videos of acoustic research. Read the rest 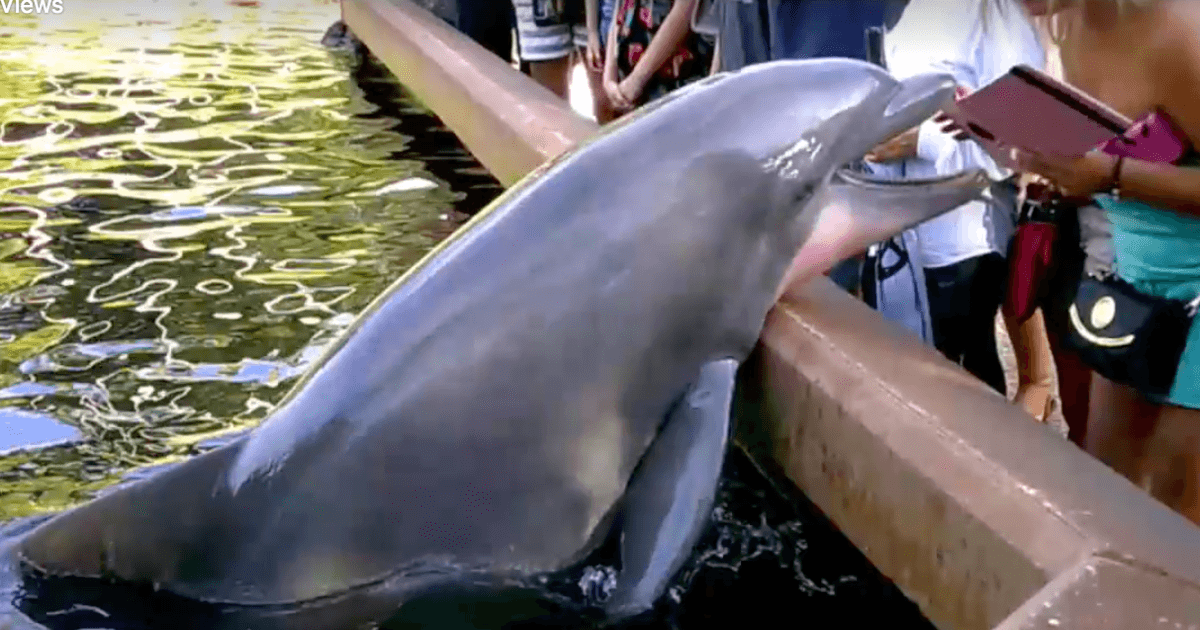 Team dolphin all the way, you guys.

A woman at SeaWorld Orlando was trying to take a photograph of the marine mammal show with her iPad, when a dolphin popped up out of the water and grabbed it from her.

"As you can see, the dolphins can reach your loose items," a voice can be heard saying over a loudspeaker. Read the rest

Pregnant woman to have dolphin as midwife 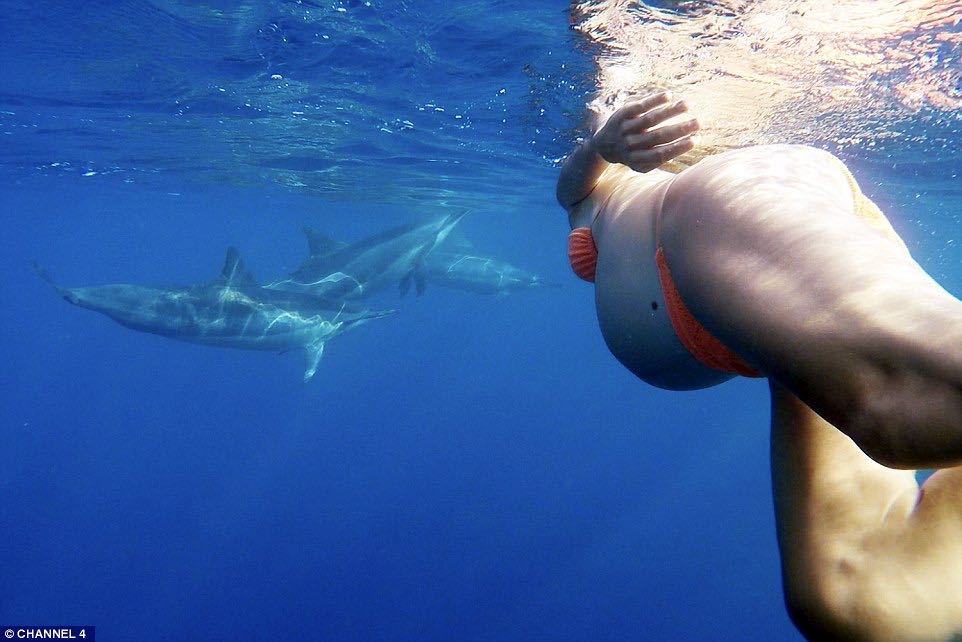 Dorina Rosin, a "spiritual healer," plans to give birth in the sea with the aid of dolphins. Among other benefits, Rosin and partner Maika Suneagle believe that their baby will speak dolphin. Read the rest 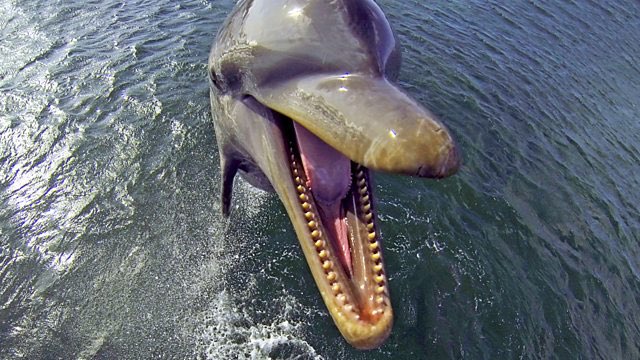 According to an article in the Palestinian daily al-Quds, Israel has "recruited a watery pet, the dolphin, known for his friendship with humans, to use for operations to kill Qassam Brigade Naval Commandos." Read the rest

Leia is a beautiful dog whose sharp eyes spotted a struggling fellow mammal on the beach. Leia's owner recorded his rescue of the little guy. Read the rest

The woman who lived (and had sex) with a dolphin

In 1964, Margaret Howe Lovatt, working with psychedelic dolphin researcher John Lilly, began to live with one of the animals full-time as part of a NASA-funded study about interspecies communication; a new documentary about Lovatt, titled "The Girl Who Talked to Dolphins," airs on BBC4 later this month. Above, a clip of Lovatt talking about how she developed a deep intimate relationship with Peter the dolphin that veered into the sexual. At the time, a sexploitative article in Hustler, the high weirdness of the experiments itself that included giving LSD to dolphins, and myriad other unpleasant issues, brought the project to a very sad end.

"The dolphin who loved me: the Nasa-funded project that went wrong" (The Observer) Read the rest

In 2010, researchers at the Dolphin Research Center (DRC) in Grassy Key, Florida, showed dolphins can imitate behaviors without using their eyesight. ... Now, a follow-up study shows not only how Tanner accomplished this task using sound, but also that he used a deliberate, problem-solving approach to imitation. The research was published in the journal Animal Cognition.

Dolphins love themselves (in that way)

Rebecca Morelle: "Research has revealed that the marine mammals use a unique whistle to identify each other. A team from the University of St Andrews in Scotland found that when the animals hear their own call played back to them, they respond." [PNAS and BBC] Read the rest

Dolphins on acid (and other bad ideas)

How dosing dolphins with LSD (and giving dolphins hand jobs) helped shape our modern pop culture beliefs about dolphins as sources of healing — beliefs that, according to neuroscientist Lori Marino, can endanger both dolphins and the humans who come to them for help. Read the rest