Find awe in the biology of these incredible leaping maggots

Above is a three-millimeter long maggot launching itself into the air for a distance of up to 36 times its body length. Researchers from Duke University and their colleagues studied how these larvae of gall midges leap between plants with the greatest of ease, even rivaling some jumping insects with legs. Their research could have applications in soft robotics and adhesives. From the Journal of Experimental Biology:

They store elastic energy by forming their body into a loop and pressurizing part of their body to form a transient ‘leg’. They prevent movement during elastic loading by placing two regions covered with microstructures against each other, which likely serve as a newly described adhesive latch. Once the latch releases, the transient ‘leg’ launches the body into the air. These discoveries integrate three vibrant areas in engineering and biology – soft robotics, small, high-acceleration systems, and adhesive systems – and point toward a rich, and as-yet untapped area of biological diversity of worm-like, small, legless jumpers. 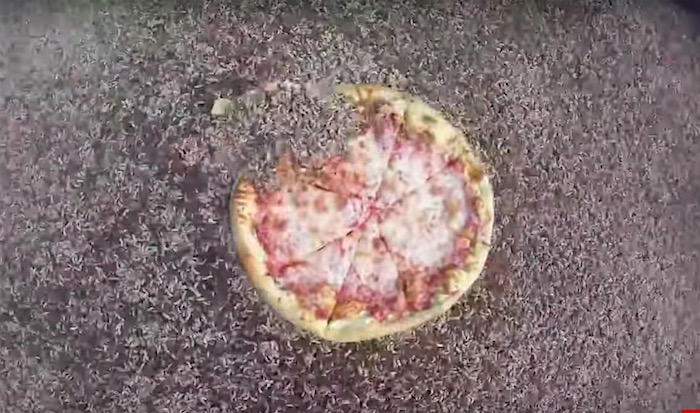 Scientists wanted to know how maggots devour food so quickly, so they conducted an experiment. They fed 10,000 maggots a cheese pizza, which disappeared in 2 hours (but only about 30 seconds in this sped-up video) and noticed an interesting "fountain" pattern of movement amongst the fly larvae that allows them to burn through food at a fast clip. According to ScienceMag.org:

The team searched for patterns in the squirming mass by tracking the flow of individual maggots with software used to model the movement of fluids. Despite the appearance of chaos, the larvae moved like water being pumped through a fountain, the researchers report today in the Journal of the Royal Society Interface. Hungry maggots pushed toward the food from the bottom, and satiated larvae were pumped up and over the top of the pile to the back of the line.

This fountain of larvae allows hungry grubs to replace the ones surrounding the food that have stopped feeding, which keeps the eating machine humming. The researchers say better understanding the process could help grub farming companies scale up and turn even more food waste back into food.

in the name of science / maggot frenzy / maggots

A fellow in Tiverton, Rhode Island paved his access road with tons of unwashed clam shells, which still had chunks of meat attached to them. His neighbors saw him doing it, and warned him that the meat would rot and lead to problems, but the man couldn't be dissuaded. Rain fell on the shells for three days. When the sun came out it brought maggots and the smell of death.

The town has issued a cease and desist order to no avail. Residents have erected signs that read “Honk if it Stinks,” and “Stop Unwashed Clam Shells.”

“Everything is sort of taken over by this stench of decaying,” says Blair Moore, who lives close to the decaying clam road. “The smell. The smell is atrocious”

More on yesterday's story about a nasal-wedged maggot scare in Portsmouth, RI's middle school (refresher: the Portsmouth Middle School sent parents a terrifying letter warning of a student Smartie-snorting epidemic and predicting that children would end up with maggots in their noses that feasted upon the sugar residue).

John McDaid, the investigative blogger who broke the story, tracked down Dr. Oren Friedman, Associate Professor, Otorhinolaryngology at the University of Pennsylvania, who was quoted in the letter the school sent home as warning that "frequent snorting could even rarely lead to maggots feeding on the sugary dust wedged inside the nose." Read the rest

Parents in Portsmouth, Rhode Island got a letter from the Portsmouth Middle School warning them that students may be snorting and smoking ground-up Smarties candies. The letter warns of risks of cuts, lung infections, nasal passage scarring, nose-wedged maggots (!), and future cigarette and drug use. John McDaid, a writer and local investigative blogger, got a comment from Portsmouth School Committee chair Dave Croston, who stated "I can say only that this behavior raises troubling issue of modeling." Read the rest