Only 35% of Uber/Lyft riders always tip 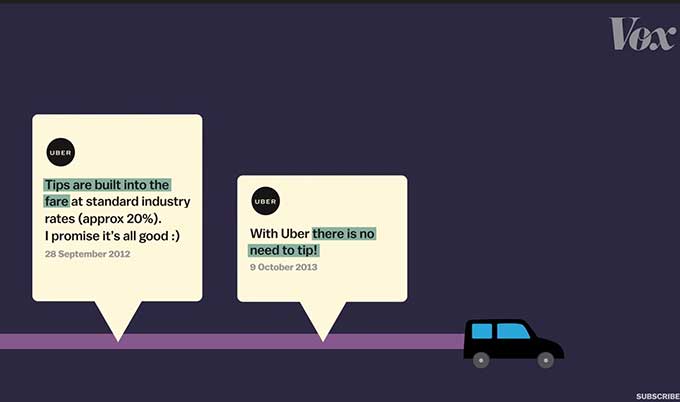 The problem with tipping is that employers pay employees less than they should. I much prefer the way things work in Japan, where there is no tipping and no uncertainty. That said, until restaurants, delivery services, and ride hailing apps in the US start paying their workers a fair wage, it's best to tip workers. This Vox video explains why tipping for ride-hailing services remains confusion and contentious.

Amazon sometimes dipped into tips earned by contracted delivery drivers for its 'Flex' service to cover the base pay they'd been promised, a Los Angeles Times review of emails and receipts shows. Read the rest

Restaurant wants you to also tip its kitchen staff

Restaurants across the country have begun to address the disparity by building in 18 or 20 percent service charges, or, as is the case with local establishments like Mélisse, A.O.C., and République, adding a 3 percent surcharge that goes toward employee healthcare. Alimento’s additional gratuity will only be divided among dishwashers, line cooks, and prep cooks. “My sous chefs aren’t getting a cut,” says Pollack, “and, of course, neither am I.”

How does the waitstaff feel about the idea? “They are actually excited,” says Pollack. “I’m guessing people will still default to giving service 15 to 20 percent, but even if they give only a few bucks to the guys in back, it will make a huge difference.”