Mitch McConnell admits he was wrong. Obama administration DID leave a pandemic plan 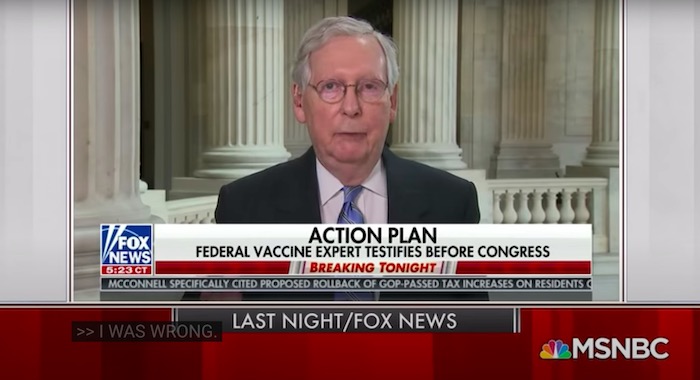 After falsely claiming on Monday that the Obama administration never left "any kind of game plan" for a possible pandemic, Mitch McConnell did what most of the GOP would consider unthinkable. He uttered the three words "I was wrong."

"They did leave behind a plan, so I clearly made a mistake in that regard," he continued on Fox last night.

The document, whose existence was publicly revealed by Politico in March, is called the Playbook for Early Response to High-Consequence Emerging Infectious Disease Threats and Biological Incidents.

The playbook contains step-by-step advice on questions to ask, decisions to make and which federal agencies are responsible for what. It includes sample documents that officials could use for inter-agency meetings. And it explicitly lists novel coronaviruses as one of the kinds of pathogens that could require a major response. Additionally, outgoing senior Obama officials also led an in-person pandemic response exercise for senior incoming Trump officials in January 2017 -- as required by a new law on improving presidential transitions that Obama signed in 2016.

Last week, Obama described the Trump administration's coronavirus response as "an absolute chaotic disaster" during a private call with people who worked for him in the White House.