Watch the first episode of 'Our Cartoon President' for free 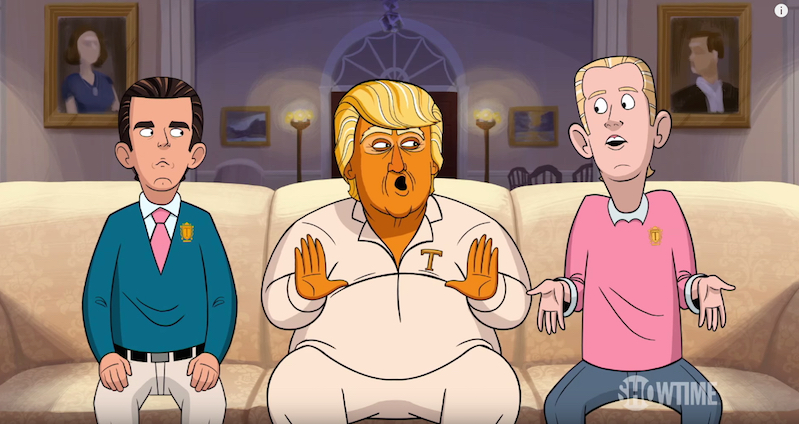 Our Cartoon President takes jabs at Trump and his rag-tag band of misfits. Showtime released the premiere episode for free:

State of the Union. The President tries to revive his low approval ratings by delivering the greatest State of the Union speech in history and to strengthen his relationship with First Lady Melania by naming her the national bird.

Marti Noxon is developing an ensemble comedy for Showtime

One of my favorite writers of film and television, Marti Noxon, is developing an ensemble comedy for Showtime. And here is the extra fun part, for those of us who like to watch funny women on television: that ensemble will be comprised of female humans! Following in the footsteps of other woman-led Showtime offerings -- Weeds, The Big C, Nurse Jackie, The United States of Tara -- Noxon's show, titled Guide to Divorce, features a "semi-autobiographical" premise about a group of 40something women getting used to life after marriage, including their saucy, saucy post-divorce sexual happenings. (This is Showtime, after all.) Deadline is unfairly calling it "Sex and the City 2.0," because any show involving an ensemble of approximately three or more women who have sexual intercourse must surely be a ripoff of Sex and the City. While she did work on estrogen-driven dramas like Private Practice and Grey's Anatomy, Noxon's cred runs the gamut from straight drama (Mad Men, Prison Break) to supernatural dramedy (Buffy the Vampire Slayer, Angel, Fright Night). I think Guide to Divorce might be more than meets the eye, and is definitely something to be excited about. (via Deadline) Read the rest