A Church of the SubGenius documentary is in the works

Folks, there's going to be a documentary about that crazy cult/religion known as the Church of the SubGenius.

But only if you send J.R. "Bob" Dobbs boat loads of cash!

Now more than ever we feel that the story of the Church of the SubGenius needs to be told. There's a core of ideas within the SubGenius ethos – of fighting oppression with humor, community and creativity, of using absurdity as a nonviolent weapon, giving time, permission and priority to expression, creation, and zaniness with friends – that we think has great value we believe these ideas are necessary in today's world and that our film about the SubGenius is the perfect way to invoke them.

Amongst all the spaceships, frop, pipes, eye-bludgeoning graphics, bulldada, yeti ancestors, (and yes, ‘macho spoutings’), we hope you will fund this film so you can join our merry band of pranksters on the culture-jam of the century! It’s going to be a lot of fun!!!

Previously: Crowdfunding a Church of the Subgenius alien contact beam 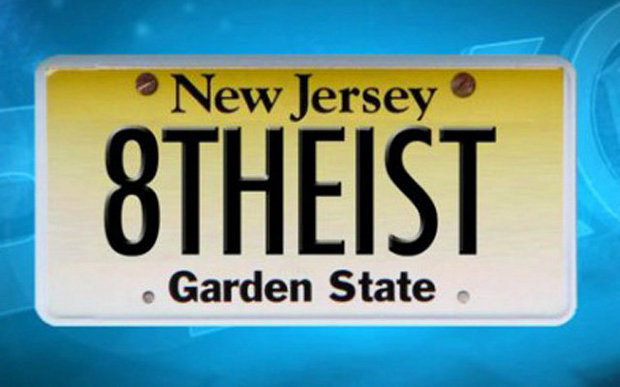 Two years ago Shannon Morgan of New Jersey ordered a vanity license plate that read 8THEIST. State officials denied her order, explaining that it might be considered offensive. She sued and won. The state Motor Vehicle Commission will also have to pay Morgan $75,000 to resolve her claim. They don't give a damn, because it's taxpayer money that they'll use to pay for their foolishness. Everyone in the chain of command who rejected the license plate request should be fired and barred from working for the government ever again, and forced to wear a colander on their head for the term of their natural lives, if you ask me.