How Matchbox cars were made in 1965 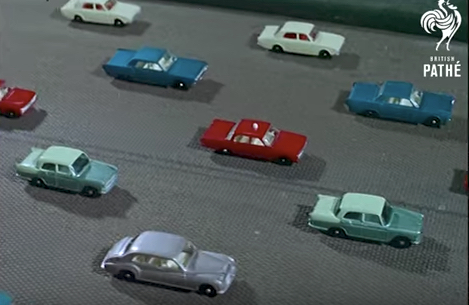 Here is delightful factory footage from 1965 of Matchbox car manufacturing in the London Borough of Hackney. From Wikipedia:

The Matchbox name originated in 1953 as a brand name of the British die-casting company, Lesney Products, whose reputation would be moulded by John W. "Jack" Odell (1920–2007), Leslie Charles Smith (1918–2005), and Rodney Smith (hence the name Lesney, a portmanteau of Leslie and Rodney Smith's first names). Their first major sales success was the popular model of Queen Elizabeth II's coronation coach, which sold more than a million models. Shortly thereafter, Lesney co-owner Jack Odell created a toy that effectively paved the way for the company's future success. It was designed for his daughter: her school only allowed children to bring toys that could fit inside a matchbox, so Odell crafted a scaled-down version of the Lesney green and red road roller. This toy ultimately became the first of the 1-75 miniature range. A dump truck and a cement mixer completed the original three-model release that marked the starting point for the mass-market success of the Matchbox series. As a result of the inspiration for the toys' size, the idea was born to sell the models in replica matchboxes — thus yielding the name of the series. It also resulted in the description of the models' scales being "1:box" (as opposed to more mathematical scales such as 1:87, 1:64, or 1:43).