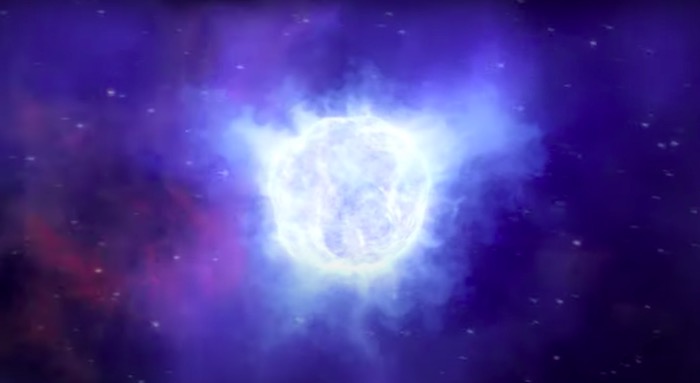 A colossal star in the Kinman Dwarf galaxy (PHL 293B), estimated to be "100 times more massive than the sun," has "possibly" disappeared, according to a study published today. Ten years ago, when astronomers observed the star -- which was 75 million light years away -- it completely lit up its galaxy. But when astronomers looked for it last summer, it was nowhere to be found.

The head-scratching discovery was announced in a study published on Tuesday in the Monthly Notices of the Royal Astronomical Society.

“We were quite surprised when we couldn’t find the star,” said lead author Andrew Allan, a PhD student at Trinity College Dublin, in a call. “It is a very extreme star, and it has quite a strong wind, so we can distinguish it from the galaxy. That’s what we couldn’t see in the newer observations.”

...Allan and his colleagues considered several explanations for the observations, and eventually narrowed down the possibilities to two scenarios: Survival or death.

If the star lived, we could be witnessing the fallout of its huge senescent outbursts, which may have enshrouded it in dust clouds that dimmed its light. If the star died, it may have collapsed into a black hole without ever producing a supernova.

This second option seems bizarre, but it would not be the first potential “failed supernova” that has been detected by scientists. Another star appears to have fizzled out without any fireworks in a galaxy 22 million light years away, though it was only 25 times as massive as the Sun (which is still pretty huge).