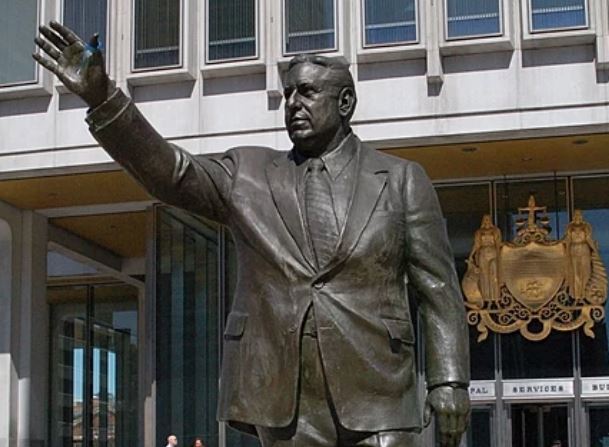 The statue of Frank Rizzo, Philadephia's longtime and notoriously racist mayor, disappeared last night. Already damaged by protestors during national unrest over the police killing of George Floyd, even city officials wanted it gone. They finally confirmed they had removed it and that it would not be coming back.

Workers removed a statue of Philadelphia's controversial former Mayor Frank Rizzo from its place of honor across from City Hall early Wednesday morning, finishing a job that protesters attempted to accomplish during recent demonstrations against police brutality.

In the 1970s, Rizzo famously told Philadelphia voters to "vote white." But on Wednesday, the City of Brotherly Love took down a memorial to a man who exploited its divisions.

The worst thing about the statue is it was only put up 20 years ago.

‪The Frank Rizzo statue represented bigotry, hatred, and oppression for too many people, for too long. It is finally gone.‬

RIZZO REMOVED: After years of controversy, @PhillyMayor finally gets the Frank Rizzo statue removed from the plaza at the Municipal Services Building, ahead of his timeline of a month. Crews worked for almost 2 hours to get him down. @FOX29philly #Philly pic.twitter.com/PSfNVo0Syb