Party every day with the KISS inflatable tongue 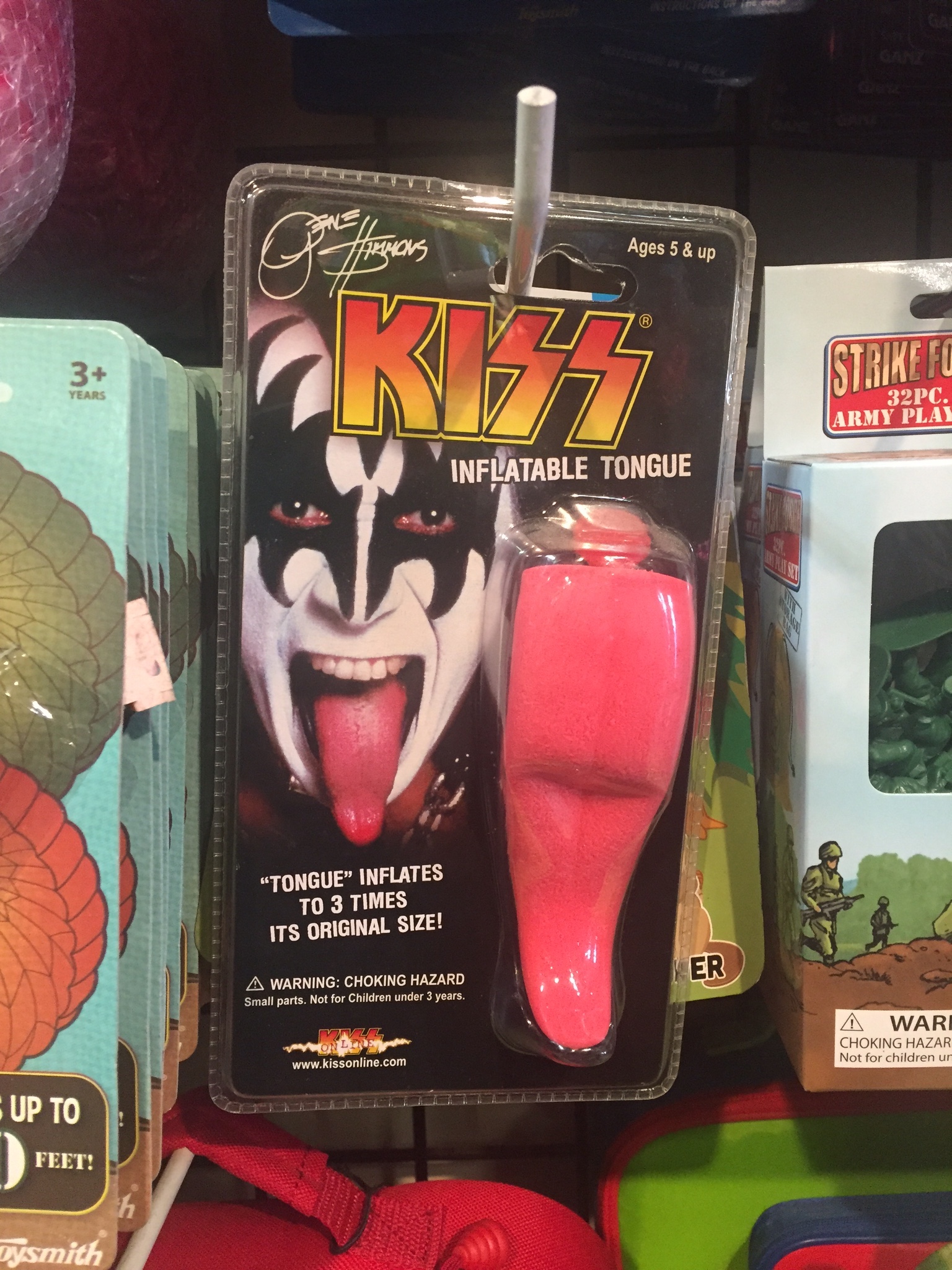 My friend Jared Hirsch spotted this at a local Bay Area toy store and wasted no time sending me the photographic evidence of its existence.

This KISS inflatable tongue is, naturally, fashioned after Gene Simmons' crazy long tongue and is touted to inflate to "3 times its original size!"

According to the KISS Museum, an online KISS retail store, "The 'inflatable' feature isn't to make the tongue larger so much as to make it move and twitch as if it were your own. Practice makes perfect!" Alrighty then.

In any event, you'll certainly get more for your money with this KISS toy than you would with their "air guitar strings." 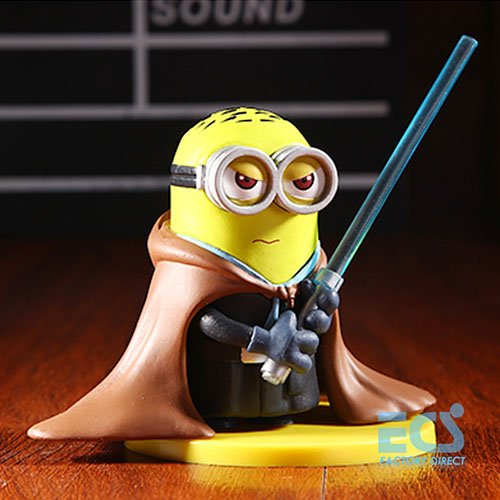 My daughter loves Minions and she loves Star Wars. It is no surprise she insisted on having these figures.

At $33 shipped, this is the cheapest set I could find. It appears there are a bunch of knock-offs available on the interwebs. If you want a collectable set, I am fairly sure these are not they.

Found at Walmart, according to The Today Show.

YouTuber Tim at Grand Illusions unboxes this delightfully soothing helicone, a wood and brass sculpture that changes from a helix to a pine cone shape with the flick of a wrist. Such a satisfying sound as it snaps into place! Read the rest

The Duncan Butterfly yo-yo is still a LOT of fun 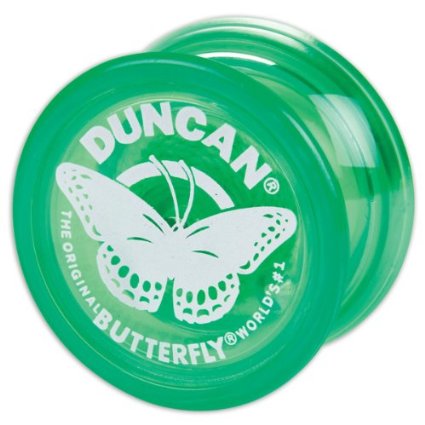 Every few years, as I rummage through a drawer or bag, I stumble across my Duncan Butterfly. Then the fun begins! Read the rest 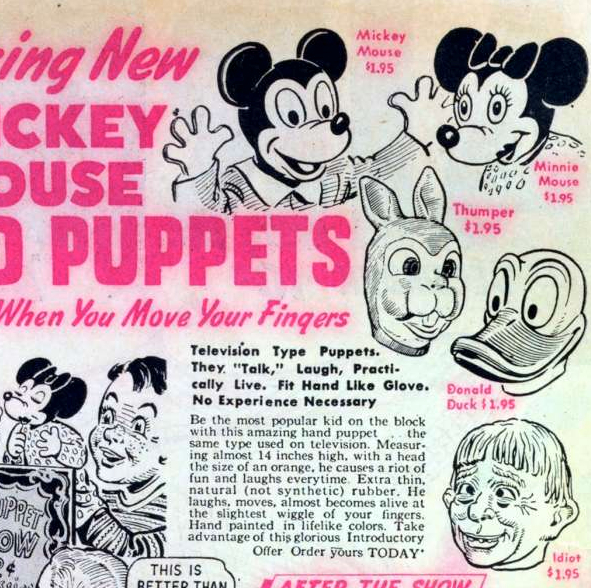 The 1949 Airboy comic has an ad for 5 puppets: Mickey, Minnie, Donald, and Thumper... and Idiot. We'll assume Idiot is not a Disney-licensed character, though he looks a bit like their Hunchback. The same firm also sold Halloween masks: Read the rest

In artist Attaboy's latest episode of "They Actually Made That!?," he demonstrates the wonder of Milky The Marvelous Milking Cow, a fine 1977 toy that was born from a licensing agreement between Kenner Toys and General Foods. Below, the original Milky television commercial in full. Read the rest

Unicron9 created a custom Star Trek/Transformers crossover toy in which the Enterprise transformed into Autobot E. "The head had to be long because the deflector dish is on the top of it for alt mode," Unicron9 says, "so I went for a majestic alien look with a mix of Geordi's visor, Vulcan ears, and Andorian antennas." "Star Trek/Transformers Crossovers: Autobot E" (deviantART) Read the rest

Video about Judith, the strange pregnant "barbie doll" from 1992

Attaboy of Hi-Fructose Magazine started a new video series called "They Actually Made That!" to showcase strange toys from history. This episode is about Judith, a pregnant Barbie knock-off, complete with spring-loaded baby. And if you really want your own Judith to play with, here you go! Read the rest

This is Skull Boy, the second toy in Josh "SHAG" Agle's line of "Shag Racers" created with Squibbles Ink and Rotofugi. The ultra-limited "gallery prototype edition" of 100 are long gone but a "standard edition" release is coming next year. Shag Racers: Skull Boy Read the rest

I gave "Ball of Whacks" to my 6-year-old son as a Hanukkah gift and I wish I'd have given it to myself. It reminds me a bit of Rubik's Snake but it's much more free-form and fun as the individual blocks aren't permanently connected but rather held together by 180 rare earth magnets. The blocks fit together in a 30-sided rhombic triacontahedron and can be recombined into animals, stars, and other geometric wonders. The Ball of Whacks comes with a guidebook suggesting lots of neat configurations, creativity exercises, and tips but we haven't bothered with that yet. It's addictive without any instruction. Ball of Whacks is available in red, blue, black, and multi-color which is what I, er, my son, was given. Maybe next we'll go for Von Oech's X-Ball, Y-Ball, or Star Ball magnet toys! Ball of Whacks

Ron English's wonderful "Temper Tot" will be born as an 8" vinyl toy early next year. (Popaganda) Read the rest

Bossini's "Premiu​m Edition Slinky Dog Muffler" is, apparently, a Slinky Dog scarf. I can't make up my mind whether this would look insanely great around someone's neck, or just silly. Or both. Someone find me a pic of it in action, as it were?